Dak Prescott's gruesome ankle injury last week, made most of the world cringe, but for one Fort Worth artist, it fueled his creativity.

Juan Enrique Velazquez had been working for the past several weeks on a large mural in Grand Prairie. Over the weekend he completed it. He spoke with KRLD’s Kristin Diaz about how he wanted the Dallas Quarterback to know his fans are supporting him. He tells her, his hope is for Dak to see the mural and be happy. He knows Dak is going through a tough time and he hopes the mural will help him positively get through it.

Juan Enrique is a big Cowboys fan. When he learned about the injury, he decided to make some adjustments to his original plans for the painting by moving Dak to the center of the project. On a wall that is nearly 30 by 60 feet, Velazquez says this is one of the biggest projects he’s ever worked on. In addition to Dak, Dirk Nowitzki, Ezekiel Elliot and also Luka Dončić are also featured in the mural that can be found on the side of AJ's body shop on West Jefferson Street.

Juan Enrique says it is just one of two portraits of Dak he plans to create soon. That will be two more, to the nearly 33, murals he's created across the metroplex in the past 7 months. Two of his most recent creations in Fort Worth are tribute murals. One of slain Tejano singer, Selena Quintanilla and Ft. Hood soldier, Vanessa Guillen. 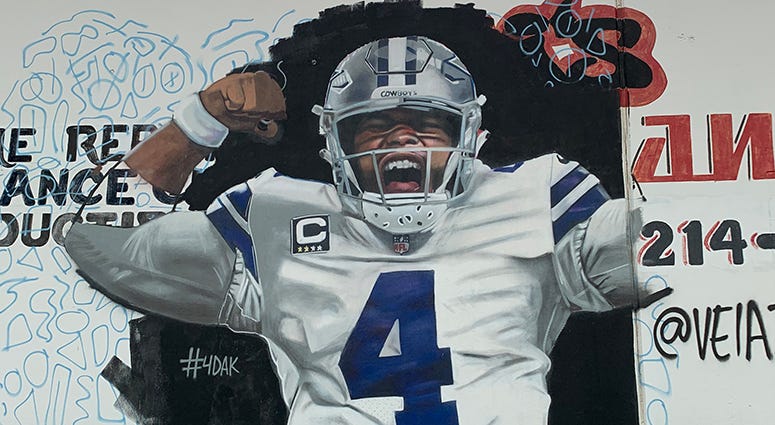