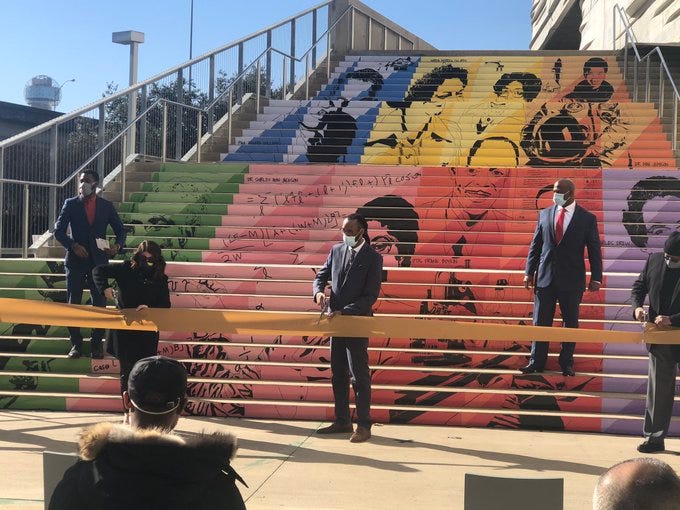 The Perot Museum of Nature and Science and African American Museum, Dallas have cut the ribbon on a project that aims to highlight African American contributions in science, technology, engineering and math. They dedicated a project called, "GIANT STEPS -- Celebrating Extraordinary Achievements of African-American Leaders in STEM."

"The Perot Museum team, this last summer, like many people across our country and across North Texas was deeply affected by what we witnessed. Everything from disproportionate devastation in our communities of color with the COVID virus to issues of ongoing social injustice we were seeing here in Dallas," says Dr. Linda Silver, chief executive officer of the Perot Museum.

She says the idea to pay tribute to African-American leaders in STEM came from an all-staff meeting.

Daniel Gunn, an architect in Dallas, won the competition, painting a staircase leading up the side of the museum with nine African-American scientists:

- Dr. Charles Drew, known as the "father of the blood bank."

- Otis Frank Boykin, an engineer and inventor with 26 patents.

"I was very shocked at that," he says. "As a matter of fact, only .4% are African American women, so I felt it was very important to pay tribute.

CEO says Perot Museum was “deeply affected” by #COVID19’s disproportionate devastation in communities of color & ongoing social injustice last year. “Our mission is to inspire minds through nature & science, but I want to underscore that it’s about inspiring *all* minds.” pic.twitter.com/hLoa3g5VpL

Gunn says he hopes the display will spark kids' interest in science.

"It's very important to start kids at a young age, get them involved in science," he says.

"Thousands of people drive by this intersection every single day," Silver says. "We hope it inspires curiosity."

The display includes a QR code people can scan to learn more about each person.

"There's a lot of history on this stairwell," says Dr. W. Marvin Dulaney, chief operating officer of the African American Museum, Dallas. "All of us know about George Washington Carver. You may not know, though, about Charles Drew, who helped with the preservation of blood plasma during World War II."