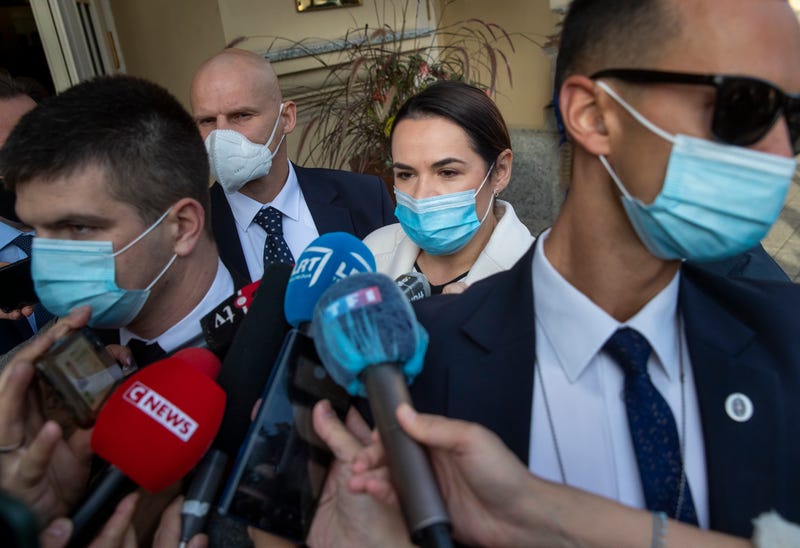 During a visit to Lithuania, Macron met with Sviatlana Tsikhanouskaya, the main opponent of Belarus President Alexander Lukashenko. Tsikhanouskaya went into exile in Lithuania after the Aug. 9 presidential election in Belarus, which election officials claimed that Lukashenko won in a landslide. Opposition figures and some poll workers say the results were fraudulent.

Tens of thousands of protesters in Belarus have taken to the streets for seven weeks since the vote to press Lukashenko, who has ruled the country with an iron fist since 1994, to step down. His government has met the uproar with a violent crackdown on protesters and targeting the protest organizers.

“We had a very good discussion. Now we need to be pragmatic and to support Belarus people and we will do all that,” Macron told reporters.

Macron had praised Tsikhanouskaya's courage during a news conference in Vilnius on Monday.

“We do not recognize the election of Lukashenko and so we don’t recognize his status as president,” he said.

Tsikhanouskaya told reporters that Macron “promised us to do everything to help with negotiations, for this political crisis in our country.”

The French leader said that "too many people are in jails and he will do everything just to help to release all the political prisoners,” she added.

Macron hoped that sanctions against Belarus officials will be adopted at summit of European Union later this week, according to Tsikhanouskaya’s advisor, Franak Vyachorko.

The European Union said last week it does not recognize Lukashenko as president of Belarus because of large-scale protests by Belarusians who question the results of last month’s presidential election.

Macron was quoted in Sunday’s Journal du Dimanche newspaper as saying “it’s clear that Lukashenko must go,” ahead of his three-day trip to Lithuania and Latvia.

Lukashenko has defied calls for him to step down and many prominent members of a council formed with the aim of arranging a transfer of power have been arrested or have fled the country. The protests have persisted despite the daily detentions of demonstrators.

Jari Tanner in Helsinki and Daria Litvinova in Moscow contributed to the story.

Follow all AP stories on developments in Belarus at https://apnews.com/Belarus.