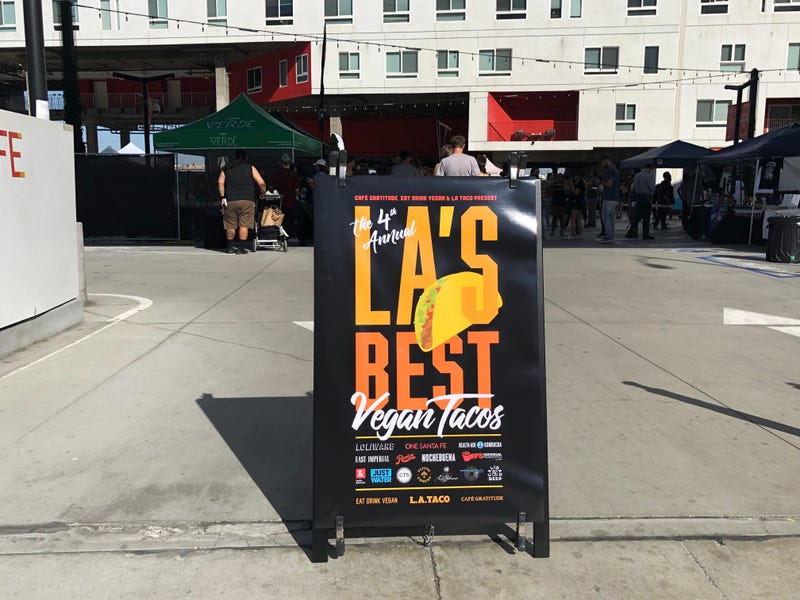 This past weekend I got together with a few friends to attend the 4th annual LA’s Best Vegan Taco festival out in the Art’s District.  The event was hosted by Eat Drink Vegan, Cafe Gratitude and the LA Taco and showcased eleven different Vegan tacos.  Not only did we all enjoy great tacos, but the proceeds of the event went to an amazing cause, the Immigrant Defenders Law Center.  All eleven vendors were competing for the best Vegan taco and the winner was determined by fan and judge votes.  Everyone in attendance received a punch card and a token to place their vote.  So without further ado, here are the tacos: 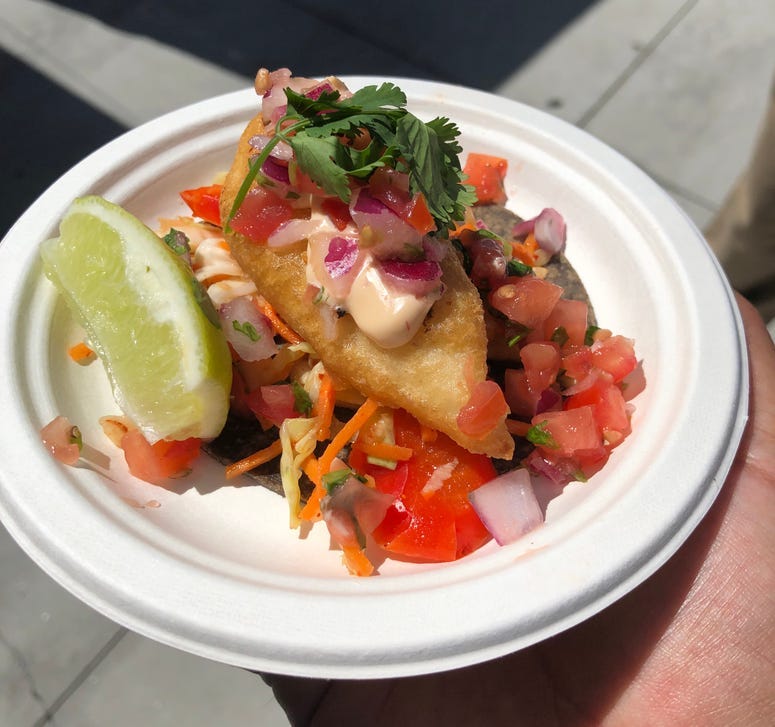 The first taco of the day was created by Chefs Mike Perez and Felix Alcaide of the Oceanside Kitchen Collaborative and came with a warning.  The gentleman manning the counter warned us not to try their taco first because it would ruin the whole event for us.  As we laughed and brush off the arrogance he handed us the fried coconut fish taco.  We took our first bite and the laughter stopped and turned into a simultaneous “goddamn!”  The taco consisted of tempura battered coconut, citrus jicama slaw, pico de gallo and a chipotle cilantro aioli.  The dude wasn’t lying, I thought of that taco the whole time we were there.  I had been craving a fish taco for a while and although this was made of coconut, the flavors and textures totally satisfied that hankering. 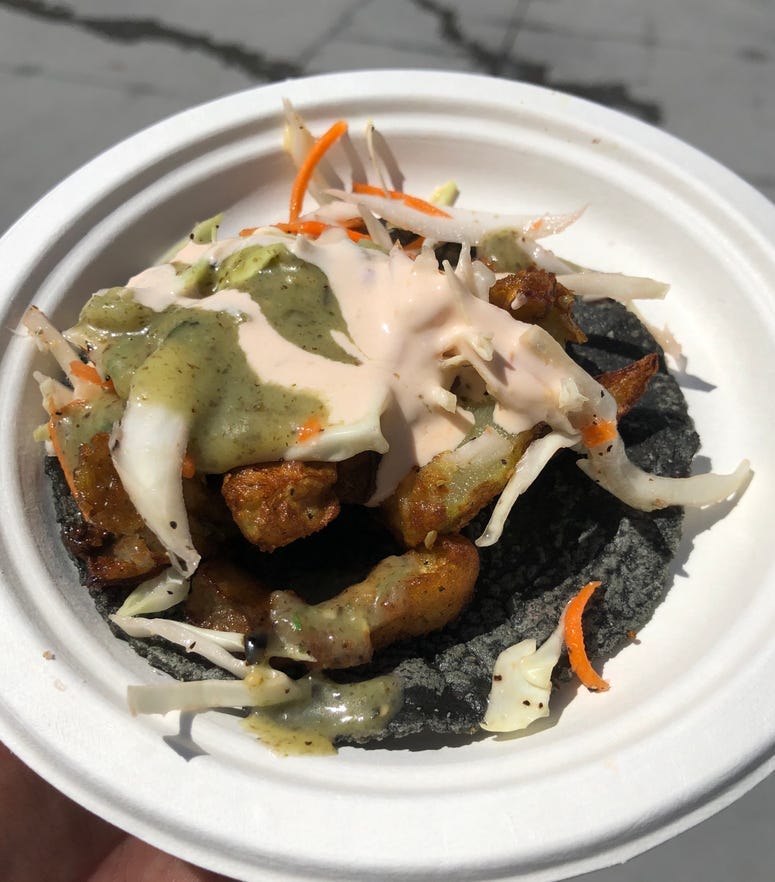 Chefs Mollie and Elias Sosa Engelhart of Sage Bistro prepared a fried zucchini taco with marinated tempura battered zucchini, shredded cabbage, habanero cream cheese and avocado salsa in an organic corn tortilla.  The fried zucchini was very savory and crunchy while the toppings made the taco as a whole quite refreshing.  Sage is one of my favorite restaurants in LA and definitely a go to while at festivals.  Sage introduced me to buffalo cauliflower and now I order it whenever I see it on a menu. 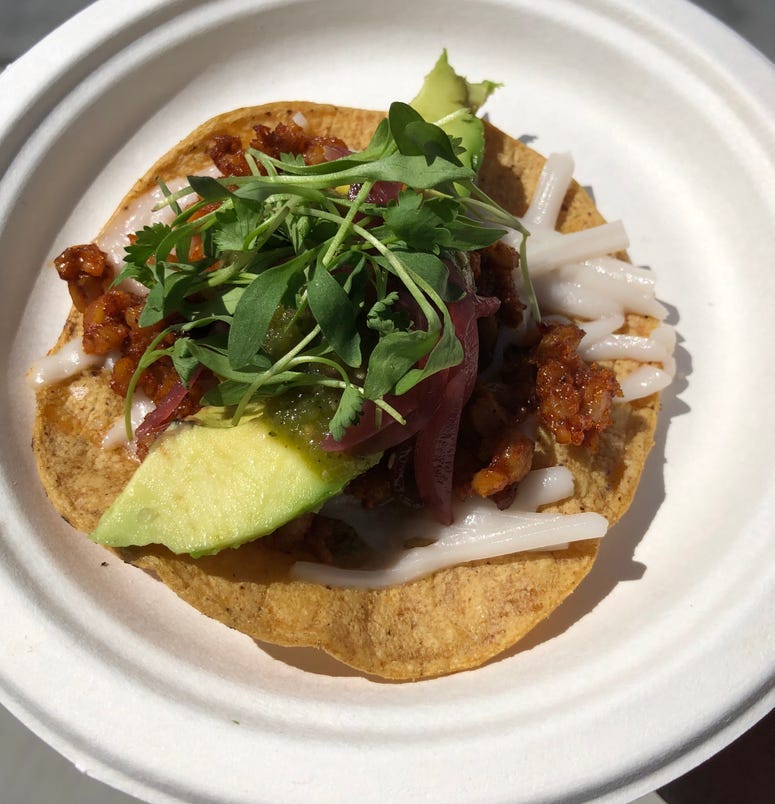 Chef Jared Simmons gave us his take on the classic chorizo taco.  He prepared a farro chorizo, Vegan Jack cheese, avocado salsa verde and pickled red onion.  I will start off by saying I love absolutely love chorizo, whether it’s soy, pork or beef.  This was the first time I’ve had farro chorizo and I’m now a fan.  The texture was right and even had crispy pieces like you would with the meat versions.  The cheese was very cheesy and had a nice pull.  Even my Vegan friends have a hard time with Vegan cheese but this one was great.  I’m a sucker for pickled onions and the avocado salsa was a great touch.  The tortilla was nice and crispy like you would make at home on a Saturday morning. 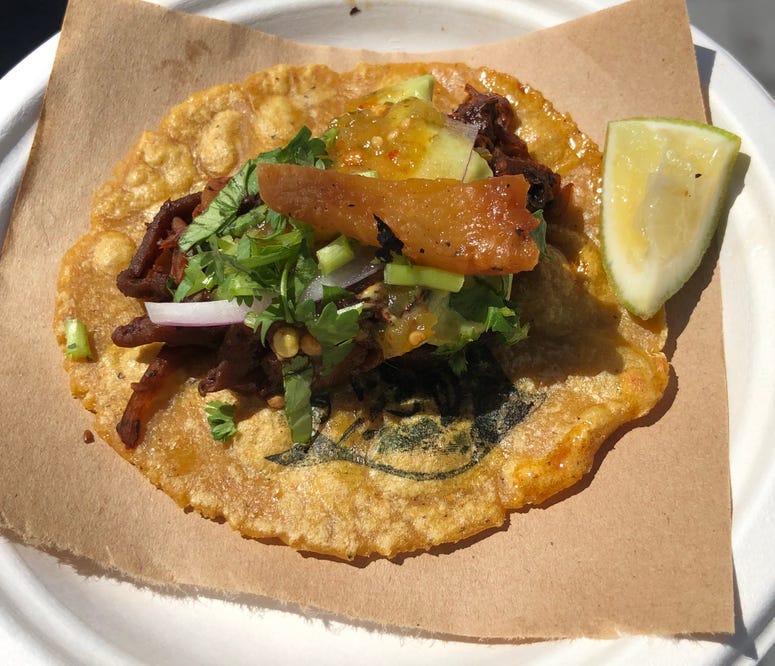 Evil Cook’s Chefs Alex Garcia and Elvia Huerta made things very interesting with a full on trompo.  They marinated Portobello mushrooms and eggplant in their Mexico de Adobo and roasted it on a spit like one you would see at a traditional taco truck.  I’m usually not a fan of mushroom because of the texture but this was marinated and seasoned so well and sliced very thin that I totally overlooked my past mushroom experiences. 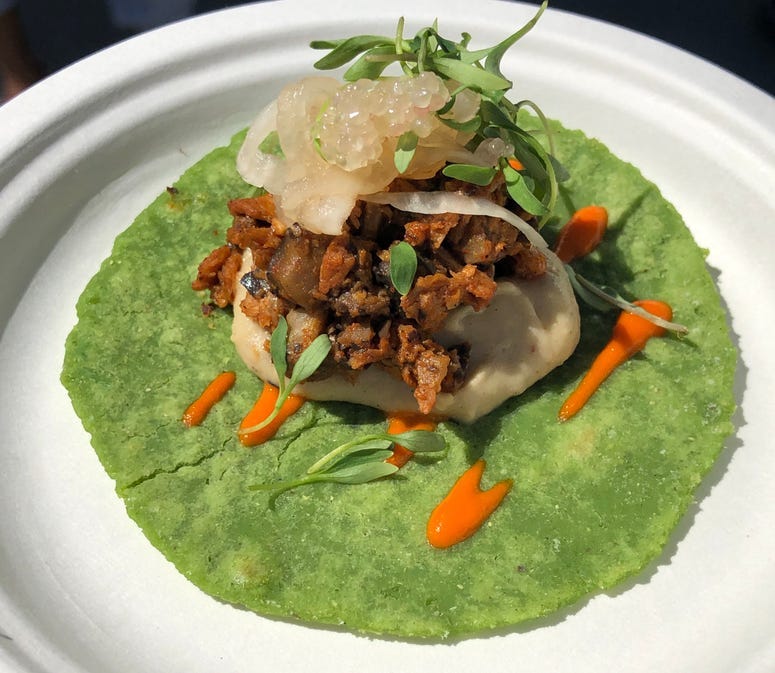 The taco that Chef AJ McCloud put together was definitely one of the more prettier looking dishes of the event.  The taco consisted of house made “beef” chorizo, smoked eggplant crema with serrano salsa and charred heirloom tomatoes.  This taco was a lot creamier than the Taco Vega’s farro chorizo.  My favorite ingredient was the finger lime garnish.  I had never seen these limes in person so I kind of got a little too excited about seeing them sliced open and spooned like caviar. 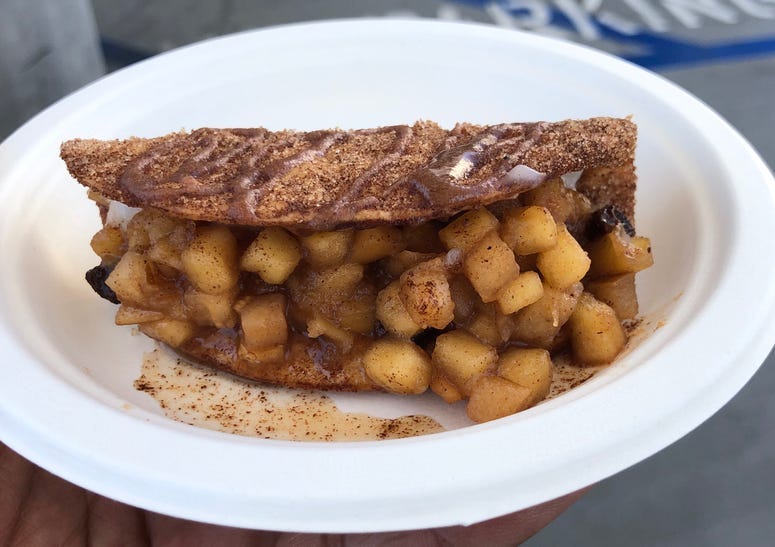 Host restaurant Café Gratitude and Chef Sergio Mendez provided the festival with its only dessert taco.  Chef Sergio put together a taco that combined all of my favorite desserts from grandma’s house, especially around the holiday season which is quickly approaching.  The Puro Amor taco was made up of arroz con leche topped with apple pear and jalapeno salsa in a bunuelo taco shell.  Yes, you heard me right.  A bunuelo taco shell! 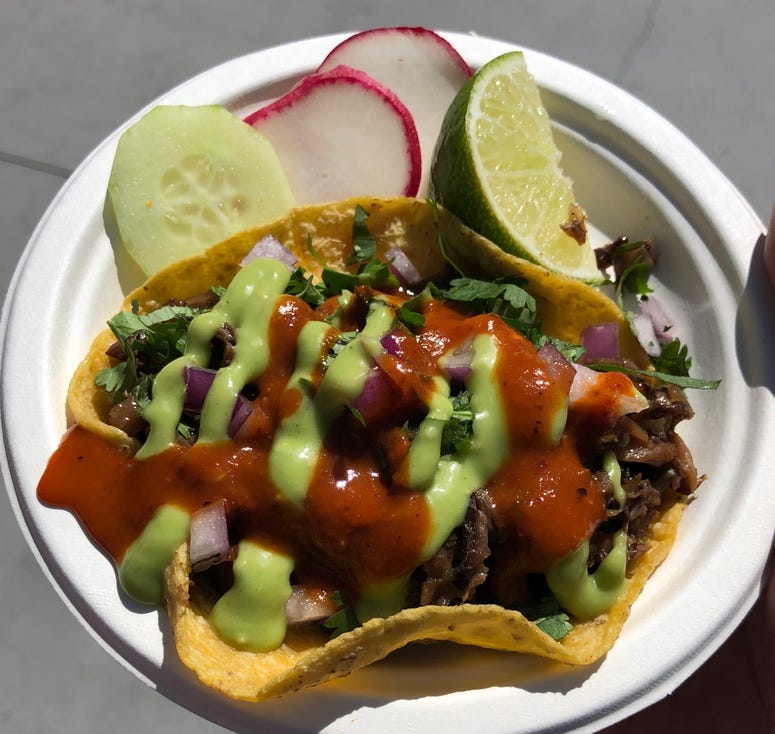 Vegatinos is a staple on the festival circuit and one of my favorite booths at any festival I attend.  Their salsas are always delicious and spicy while their servings are enough for a group of people.  Chef Alex Vargas created a street style taco with oyster mushrooms grilled with onions served in a handmade organic tortilla topped with cilantro, onions and avocado salsa.  Vegatinos was announced as the LA Taco’s best Vegan taco based on online votes. 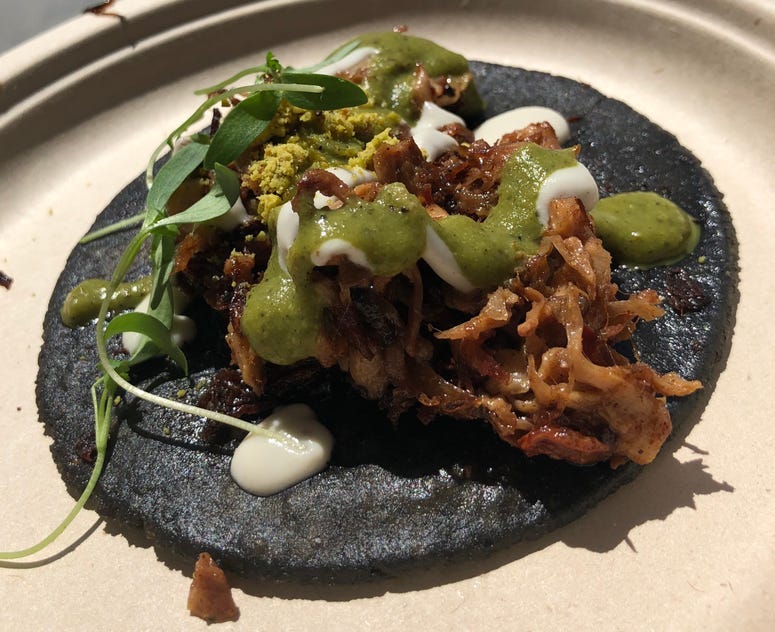 Todo Verde and Chef Jocelyn Ramirez provided the festival with, in my humble opinion, the best tortilla of the day.  The blue corn tortilla was hand made on the spot.  The tortillas were nice and thick and bounced back when you pinched it.  The meat-eater in me wished I had a saucy guisado or juicy birria to go along with this perfect tortilla.  I had neither but I was not disappointed.  The perfect tortilla enveloped seared jackfruit, roasted poblano pistachio pepita pipian verde, cashew crema and pistachio dust. 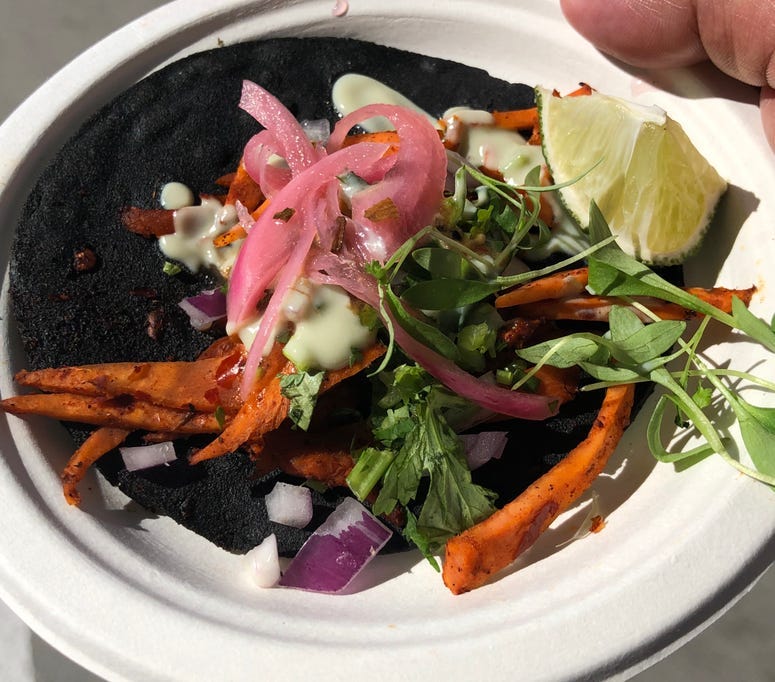 Chef David Fuerte of Masa Taco also created a beautiful trompo using celery root marinated for about seven days.  The taco was made up of the al pastor marinated celery root on a handmade activated charcoal and roasted pineapple tortilla.  The root vegetable gave the taco a nice crunch.  What I loved about this taco was that although it was marinated like meat, it wasn’t trying to replicate it. 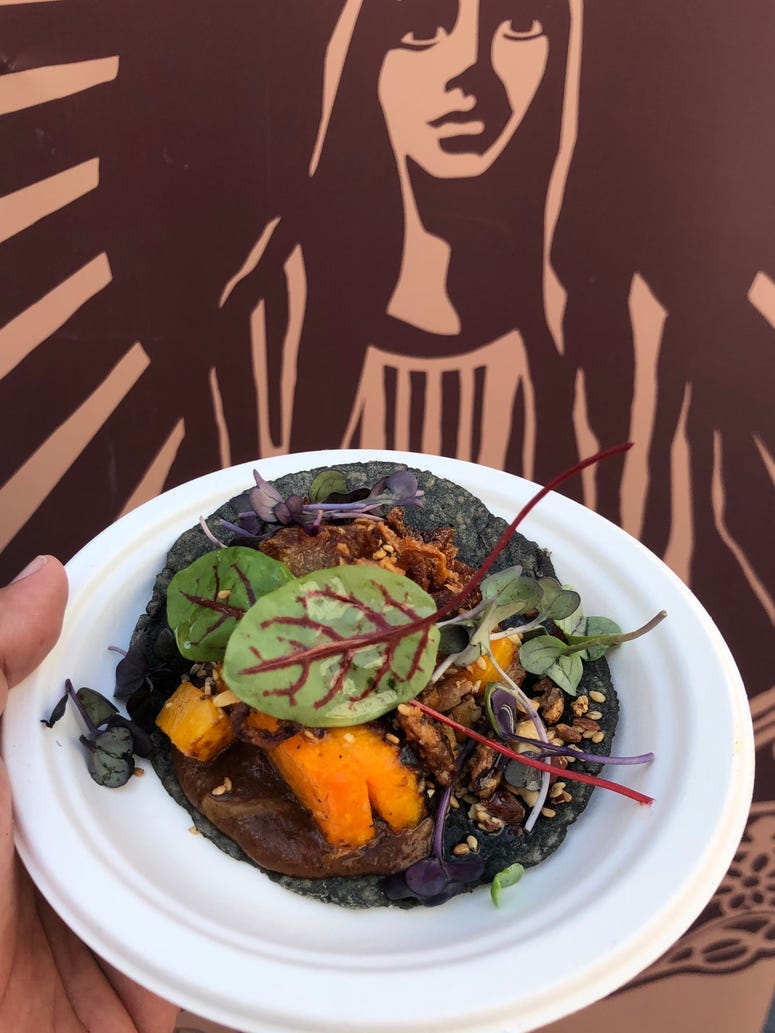 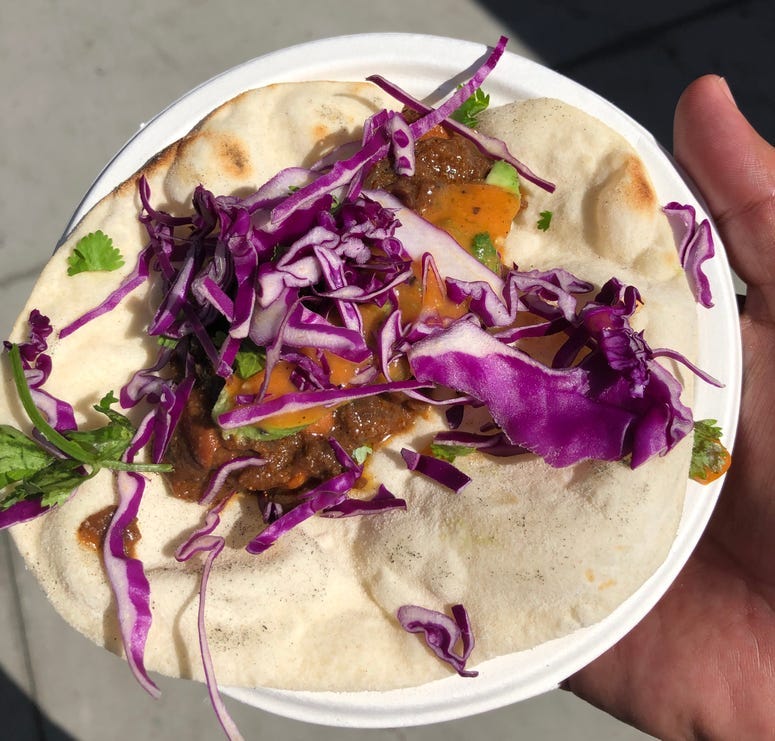 Last but definitely not least was Chef Jesse Amaro’s hand rolled taco.  Chef Jesse gave the festival the only flour tortilla of the day.  The process was beautiful.  I watched as he made four tortillas at a time; forming and flattening the masa and then tossing them in a stone oven.  The tortilla is then topped with braised hibiscus stewed in a New Mexico Hatch Chili, fire roasted salsa, red cabbage, jicama, avocado and micro cilantro. 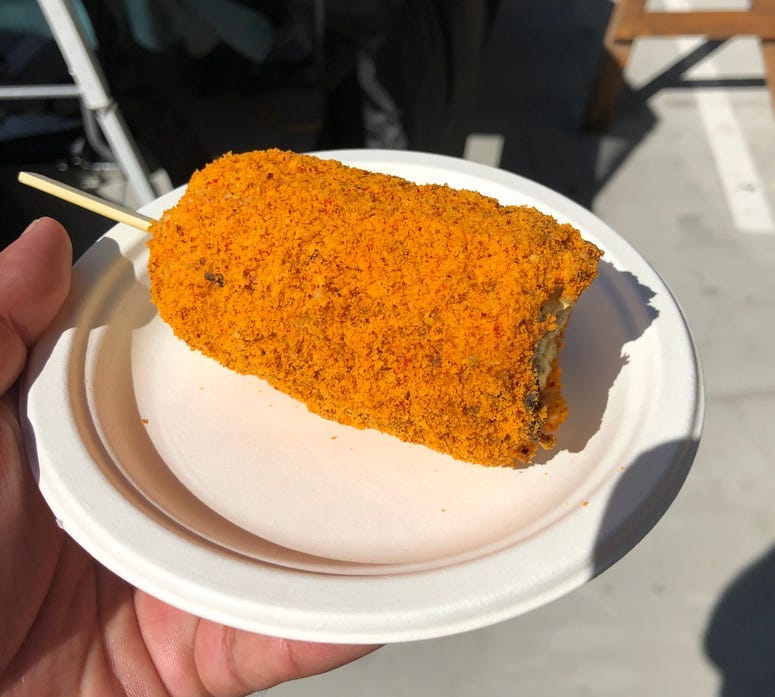 Although not a taco, I would be remiss if I didn’t mention the elote by Chef Steven Fretz of Nic’s on Beverly.  Chef Steven grilled sweet corn on the cob and coated it in serrano lime aioli and espelette parmesan cheese.  It was a nice take on a street cart food item and I loved every bite.

This was such a laid back and well put together event.  Everything flowed smoothly, the lines never got long and everyone was there to enjoy delicious tacos.  A huge shout out to my friend Janette Fernandez for producing such an amazing event.  Follow her on Instagram @janetterfernandez, as she runs one of the biggest Vegan accounts out there.  Until the next one, cheers!