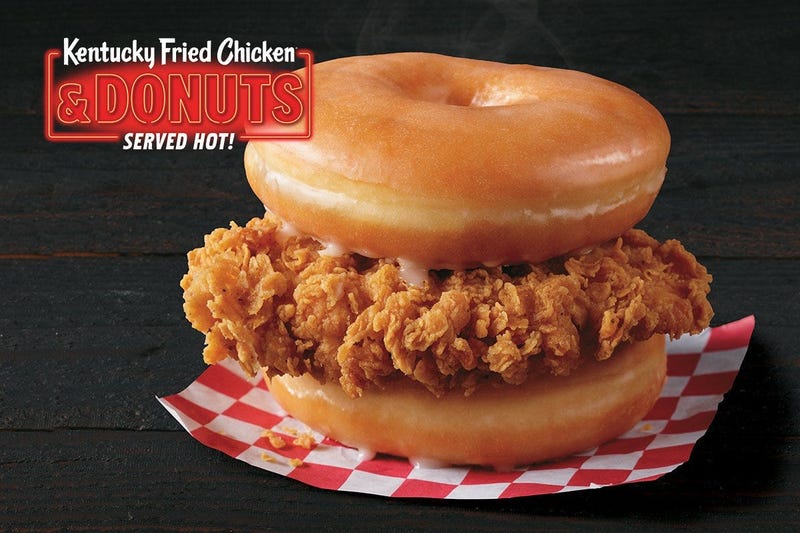 Yesterday was a big day in the world of fast food, and Jensen was so happy to be tagged on Twitter by several listeners because there were a lot of major announcements. Jensen explained, ever since the phenomena that was Popeye’s spicy chicken sandwich we’re currently in a state of Chicken Sandwich wars. So everyone has tried to capitalize on this trend. Yesterday KFC has started its own reign. KFC is the supreme franchise chain in these wars because in 40 locations throughout Virginia and Pittsburgh they will roll out the ‘Chicken and Donuts’ menu. It includes a fried chicken breast between two warm glazed donuts as buns. It will cost $6.00 and $8.00 in a combo. Chicken with glaze, amazed or dismayed? Here’s our take:

Allie is currently looking for flights to Virginia, so Eat It!

Kevin with no questions asked, Eat It!

Pizza Hut has teamed up with Cheeze-It Chips to make 4 baked jumbo squares with a crust topped with the iconic sharp cheddar flavor of Cheeze-It crackers and they look like little puffy Cheeze-It crackers themselves. Each crispy square is topped with cheese or pepperoni and cheese and comes served with a side of marinara dipping sauce. They will be found at participating Pizza Hut locations starting September 24th for the price of $6.49. Is this a partnership of flavor? Do you cover it with cheese or do you prefer a disease? Here’s our take:

Kevin again with no questions asked, Eat It!

Bean is not a fan of Cheeze-It’s. He thinks they're better ways to get cheese on a pizza, so Beat It!

Next, we go to El Pollo Loco for the first-ever ‘Kids Menu’ item on the fast-food report and we’re being told by Kevin that you can order from the kid's menu without any repercussions. The Mac & Cheese Chicken Taco is filled with fire-grilled chicken and macaroni & cheese. It may sound like a stoner’s late-night concoction, but it's available for a limited time for just $2.49 a la carte or $5.00 with a regular drink and small side. Good for the big’s or leave it for the kids? Here’s our take:

Bean doesn’t need to kill another chicken, so Beat It!

Allie doesn’t want anyone messing with her taco, so Beat It!

Kevin likes everything about it, so Eat It! 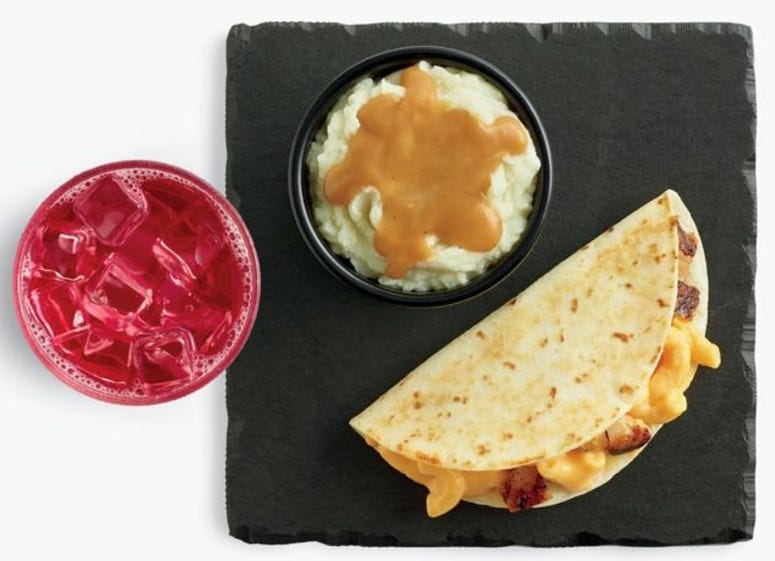 As we all know Olive Garden is the best for a family but, what if you put a pizza inside a bread bowl? How will the family react? The Chicken Alfredo Pizza Bowl will use pizza bread as the dough of the bowl, filling it with a blend of Italian cheeses, Alfredo sauce, and grilled chicken. It’s literally a bowl filled with chicken pizza! The bowl will start at $7.99 and will be served with unlimited soup or salad and breadsticks. So, handle or keep pizza rectangle? Here’s our take:

Allie loves anything in a bread bowl, so she would eat the hell out of it.

Kevin with no questions asked, Eat It!

Bean isn’t ready to trust Olive Garden with a pizza, so Beat It!

Are you brave enough to eat brisket from Subway? For a limited time, you can get a Smoked Brisket Sub from Subway. The new sandwich will have smoked brisket, cheddar cheese and a zesty barbecue sauce served between pieces of fresh Italian bread. It's only for sale through November 7th. You know the old saying, “If you want real barbecue go to Kansas City, Texas or a Subway location near you.” Customers can purchase the new Brisket Sub for $6.99 for a 6inch or $10.99 for a 12 inch. Subway Brisket sub, Barbecue or Barbe – eww? Here’s our take:

Kevin is not having that sub any time soon, so Beat It!

Bean will also not be eating it, so Beat It!

Allie said hell no, so Beat It!

Jensen said he will be trying it, so get the toilet ready!