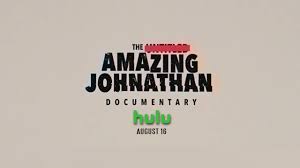 Every Thursday morning Jensen brings our attention to something that we may not know about yet or something we may have overlooked in the past.

This week Jensen got us up on a new Hulu documentary, The Amazing Johnathan Documentary. We even had a special guest join us in the studio, the director of the documentary, Ben Berman. The Amazing Johnathan is a magician comedian from the ‘80s, 90’s, and early 2000’s. He had a rebellious “break all the rules” act that was unlike anything we’d ever seen before. He was wild and out of control, but his unpredictability spread around the country. His comedy bits included pulling out his eyeball and chewing on it and sawing his own arm off, which seems like he could only do that twice.

Jensen remembers watching Jonathan on the Late Show with David Letterman and Comic Strip Live and thinking that he was strange and odd, but liking him, and also - not entirely sure why. In 2014 his career came to a halt when he announced that he was diagnosed with a terminal heart condition and was only give a year to live. It was then that Johnathan retired and disappeared. This documentary picks up his story 3 years later (yeah, he’s still alive).

Berman told us he set out to make a documentary about Johnathan because he also found him mysterious and interesting. Six months into making this documentary and two days before Jonathan was scheduled to begin his comeback tour, Jonathan told Berman that he was allowing a second documentary crew to film a separate documentary on him - at the same time. Berman was faced with a challenge, he had to decide whether to give up and not compete with who he was told were Academy Award-winning filmmakers or, include this other documentary crew as a part of the narrative. He ultimately decided to include the filmmakers into his documentary and it quickly became a competition between them (and maybe some other people as well).

Kevin & Bean had Johnathan on as a guest a while back, and now it’s been almost 5 years since he was given the one year to live prognosis. This is great news, but living this long comes with some questions. There are people that believe that his condition may not be real, including some who are very close to him. Berman goes on to explain that Johnathan IS an illusionist, and he’s made millions of dollars deceiving people as an honest liar: a magician. So Berman concedes that there is the possibility that he could be deceiving us about his illness, and that theme is explored in the documentary as well.

The documentary keeps you guessing the whole time and if you love movies like Catfish, Exit Through the Gift Shop or Tickled, you’ll love this film. Berman and Jensen referred to the film as a journey through the exploitive and manipulative documentary. The film will be in theaters in New York and Los Angeles tomorrow and you can also watch it, starting this weekend, on Hulu.