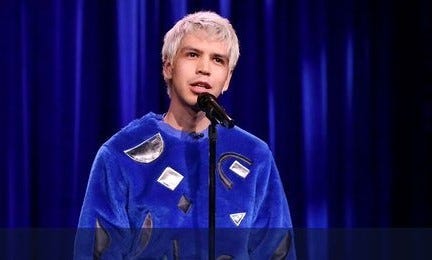 This week Jensen got us up on one of the most exciting, original and promising comedians of the past decade. He is 32-year-old Julio Torres. For the past few years, he’s been working as a writer for Saturday Night Live (SNL). Torres is responsible for the melodramatic digital shorts that seem to make little to no sense and feel like they come out of nowhere, such as the Melania Moments. He’s currently working on two projects for HBO and Jensen is confident that they’ll both end up on most of our Top 10 lists of favorite TV shows at the end of the year.

Torres left his family and immigrated from El Salvador when he was 22 years old, so to now have him be one of the new and original voices in American comedy is truly incredible. His story and foreign background is so unique that Jensen has a hard time thinking of anyone else who’s done something similar to that in the past 10 years. He appears inspired by ‘70’s surrealist comedians like Robin Williams, Steve Martin, Andy Kaufman, and Pee Wee Herman.

Torres isn’t afraid to fully commit and is willing to take huge risks, which is what caught the eye of Fred Armisen. He’d watch SNL and call in to ask who wrote sketches he liked and he kept getting the same answer: Julio Torres. As a result, he reached out to Torres with an idea for a show that is now a hilarious, strange, and mysterious weekly program called Los Espookys. It’s HBO’s first primarily Spanish speaking program that follows a group of Mexican horror enthusiasts who start a business creating spooky scenes and situations for clients in need. For example, a priest who needs to stage a fake exorcism to gain more clout in his church or a mayor who wants to boost tourism in her small town with a fake sea monster. Jensen views it as sort of a Gen Z Ghostbusters and describes it as a mix of 30 Rock, Twin Peaks, and a telenovela. Bean agrees with the description and did not hesitate to call it one of his favorite TV shows of this year so far. All the episodes are available to stream from HBO and they get full approval from Jensen and Bean.

Torres also has an HBO Stand Up special called My Favorite Shapes debuting this month. In true Torres form, he doesn’t take a normal approach. Taped in Brooklyn, Torres performs on a futuristic set, sits in front of a conveyor belt and throughout the show, random objects move towards him to riff on. Much like Los Espookys, it is unlike anything you’ve ever seen before. His humor is so dry and so strange and this first special will air for the first time on August 10th at 10:30pm on the HBO network, and slightly earlier on HBO GO and HBO NOW.

You should watch his show Los Espookys immediately and don’t miss his upcoming Stand-Up comedy special, My Favorite Shapes. This is yet another Get Up On highlighting an immigrant here legally in the United States that is a contributing genius to American culture.