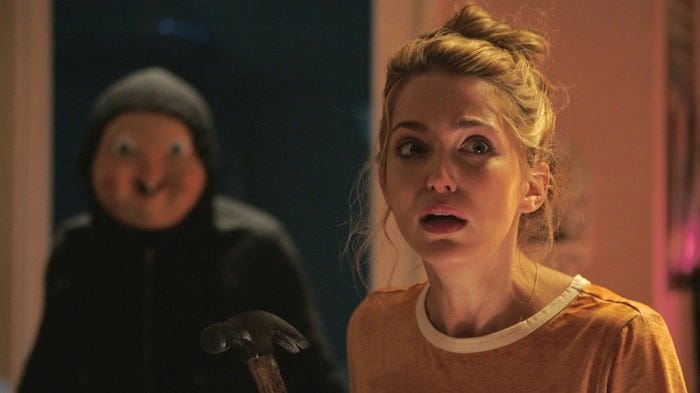 Jensen gets us up on something new or something we may have missed. Today we continue the Halloween month theme of previously released horror films Happy Death Day, Ginger Snaps, and Ouija: Origin of Evil.

It is officially Halloween! Every week this month Jensen has brought us three different horror films that most people haven’t seen or don’t get the attention they deserve. For this final week of October Jensen gets us up on these horror movies Happy Death Day, Ginger Snaps, and Ouija: Origin of Evil.

The first film is the 2017 black comedy slasher film, Happy Death Day. It was directed by Christopher Landon, who is best known for writing Jensen’s guilty pleasure Disturbia, which is basically a rip off of Rear Window with Shia Labeouf. Happy Death Day is a Blumhouse production, which we all know is a medal of honor for all horror movies. The movie tells the story of college student Theresa “Tree” Gelbman, who is violently murdered on her birthday by a man in a grown baby mask. Behind the scenes, the mask was designed by the same person who designed the Scream mask. Tree then has to live the same day over and over again, and in the process decides to try to stop the murder, hoping that will make it stop. It is Scream meets Groundhog Day with a large focus on the latter, including a joke that references Bill Murray. It was a surprise hit at the Box Office that spawned a sequel that’s not so good called Happy Death Day 2 U. The movie plays with a Mean Girls / John Hughes vibe and it’s surprisingly very entertaining. This slasher doesn’t take itself very seriously and the best part about this movie is...it’s one hour and thirty-six minutes long.

The second film this week is a Canadian cult classic called Ginger Snaps. Released in 2000 it’s directed by a guy named John Fawcett, who later in his career would go on to create the TV series, Orphan Black. It stars Emily Perkins and Katherine Isabel as Bridgette and Ginger Fitzgerald, two somewhat death-obsessed Goth teens who have created a pact to live through this torture that is life or die together. They live in a small town called Bailey Downs, where a recent run of dog killings has taken over the community. The sisters become very curious as to who is killing these dogs and decide to get involved. While following through with a plan to kidnap a bully’s dog, Ginger gets her period and in-turn is attacked by a monster that is most likely the culprit behind the dog killings. Ginger is bitten, but her sister saves her and from there Ginger starts to transform into a Werewolf. She makes a full transformation and starts attacking bystanders. It is a fascinating metamorphosis movie and the metaphor is not lost on anybody. It’s become a major cult success spawning an entire string of sequels that Jensen hasn’t seen, but the original is awesome. It doesn’t take itself too seriously, but he best part about this movie? – one hour and forty-five minutes.

Lastly, the third movie this week is by a guy we’ve mentioned a few times this month, Director Mike Flanagan. He’s about to be mentioned a ton in pop culture for the movie Doctor Sleep, which is already getting incredible reviews. He shocked the world when he released the horror prequel in 2016, Ouija: Origin of Evil. He had nothing to do with the original film Ouija, released in 2014, but this film was supposed to predate it, but you don’t have to know anything about the original to love and enjoy Origin of Evil. A widow runs a phony séance business out of her house where she lives with her kids and decides to buy an Ouija board to incorporate into their act. And as a result, the Ouija board takes over the body of her youngest daughter. The first movie shouldn’t even exist in comparison to Flannigan’s follow-up. The movie feels completely ‘70s, especially since they only used film equipment that was available in the ‘70s, and even convinced Universal to use the logo from 1963 to start the film. It’s awesome and a rare example of when the second movie is completely better than the first. But, the best part of the movie is...it’s only an hour and thirty-three minutes.

This final week of scary movies for the month of Halloween are, Happy Death Day, Ginger Snaps, and Ouija: Origin of Evil, all of which are underrated and deserve a second look. Jensen encourages everyone to view the movies from his completed list, especially if you haven’t seen them. You can see every title Jensen mentioned one October now on KROQ.com. Happy viewing - and Happy Halloween!