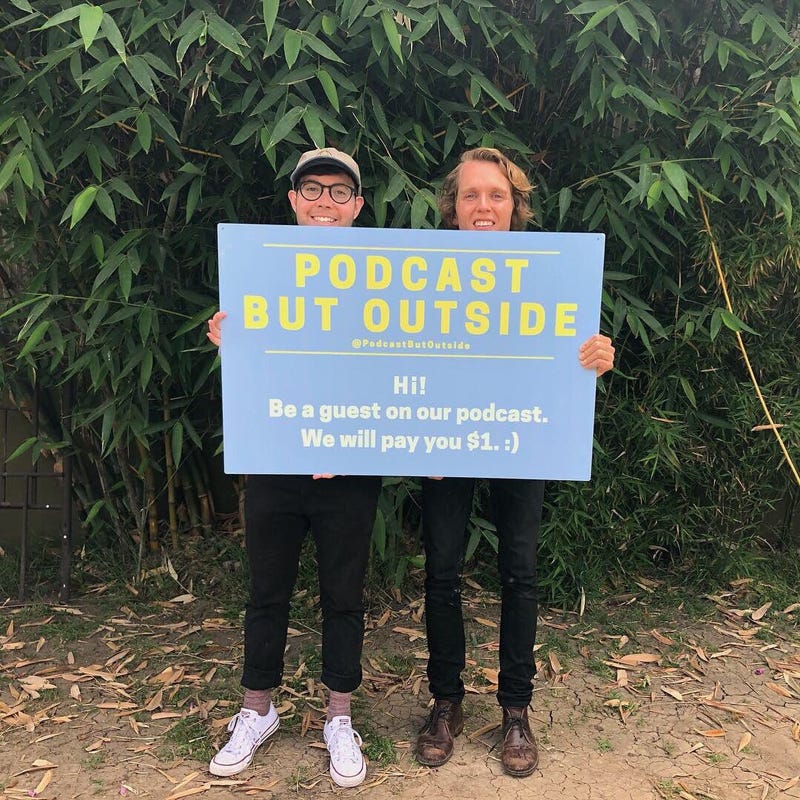 This week Jensen brought in two special guests, the co-hosts of Podcast But Outside, Andrew Michaan & Cole Hersch. It’s a podcast where they interview people in a traditional podcast format...but outside. The two guys sit outside at a table and have a sign that says “Hi! Be a guest on our podcast. We’ll pay you $1 :)". They have a 5-10% success rate when trying to get a guest and at times it is difficult to find someone willing to speak with them.

A big aspect of this podcast is that it’s not just an audio recording, they also film all of the episodes as well. Their cameraman is a friend of theirs and in order to bypass the filming permits, they came up with a way to avoid getting shut down or fined. In the first episode they agreed that, if a police officer was to approach them, their alibi is to say that the cameraman is not with them and they have no idea who he is. He’s just a random guy who decided to set up his camera and film them, and that they are simply recording audio. In the latest episode, they used the plan...and IT WORKED.

Cole had the idea for this podcast a while back and after involving Andrew, they planned to actually, do it as both an audio podcast AND a video.

Everybody has a story, and there are people who want to tell it, but no one asks until now. The process of getting good guests is self-selective because the people who end up sitting down to talk with them, are more often than not are very interesting, charismatic and have a lot on their mind. They’re also starting to get repeat guests that they’ve gotten to know well, which makes for a fun story to follow. You can find Podcast But Outside anywhere you get podcasts and on Twitter, but most importantly, the Youtube channel gives you the full Podcast, But Outside treatment.