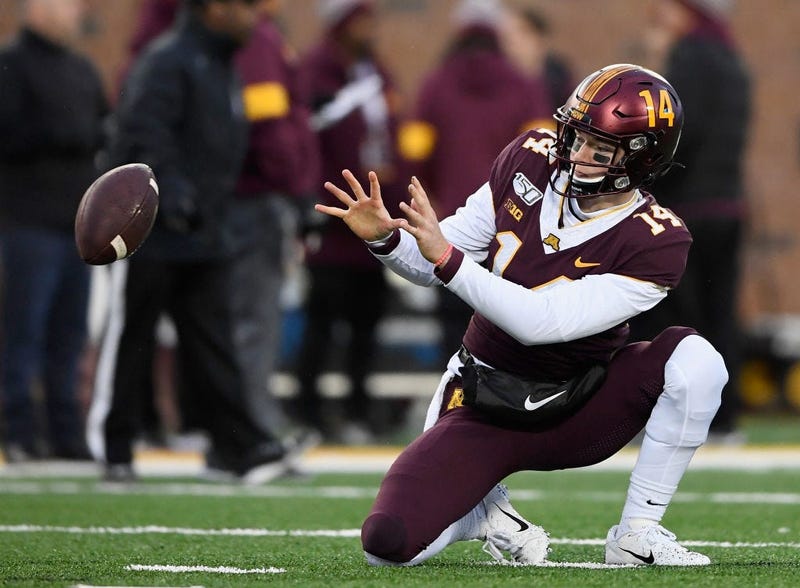 This morning Jensen introduced us to Casey O'Brien who was a promising Minnesota high school Quarterback. As a teenager, he was diagnosed with a bone cancer called osteosarcoma. Over the next 4 years, he was treated for cancer 4 times and underwent 14 surgeries and numerous rounds of chemotherapy. Throughout his struggles, he promised his family that he would once again play football. He enrolled at The University of Minnesota and in his freshman year, he won a walk-on position as a holder for the placekicker. As a freshman, he did not see any playing time but, this year as a Sophmore he had not played in any of the first six games. This past Saturday when the Golden Gophers went up 27-0 over Rutgers early in the fourth quarter, O'Brien finally got his chance to take the field with his teammates after being in remission for exactly one year. He successfully did his job helping them win a 42-7 victory over the Rutgers Scarlet Knights. When he returned to the sidelines he was met by Coach P. J. Fleck and it was emotional. It’s an amazing story of recovery and perseverance. This was Jensen’s GREAT NEWS!!!

"That's what college football's all about."

It was perfect, and so was everyone's reaction. pic.twitter.com/mnaGvgsErF

Allie brought our attention to best friends Megan Grant and Lindsy Wolke who while out antiquing never expected to find a stack of love letters at a shop in Tennessee. It turns out they were long lost love letters written by a sailor and his girlfriend during World War II. Wolke said once they started reading them, they couldn’t stop. It was a man named Elias Maxwell and he was serving in Hawaii and Japan while his sweetheart Elaine was back home in Blackwood New Jersey. You could tell they loved each other because she wanted to be his wife, ending her letters, "Your wife, hopefully soon.' They bought the stack of 21 letters for $88.00 and then tried tracking them down. The search led them about 800 miles from home in Tennessee to Clementon, New Jersey where the family of Elaine and Elias lived. They found out that they did get married in 1948. Elaine passed away in 2015 at 89 and Elias died in 1993 at 66. They had four children: Pat, Jean, Tom, and Barbara. Grant and Wolke flew out to meet them and to turn over their letters. Their children now have a whole different view about their parents and their love that they never knew existed. It was an unexpected blessing and it is perfect for Veterans Day. This was Allie’s GREAT NEWS!!!

Kevin told us about Fargo Brewing Company and their partnership with a local rescue group, 4 Luv of Dog Rescue to help get pets adopted that are difficult to find homes for. So, they decided to advertise them by putting the dogs on the beer cans. It was a great wat to get the word out and to get some exposer to these harder to adopt dogs. Last Monday Fargo Brewing Company held an event where everyone was invited to purchase a six-pack of the beer for $9.00 and meet the dogs that were up for adoption. This was a very creative way to put the word out and he would drink their beer because of it. This was Kevin’s GREAT NEWS!!!

Today is the day! Join us at Fargo Brewing at 5pm and support @4luvofdogrescue and help these “Oneder Dogs” find their forever home! pic.twitter.com/08lpPFmxbR