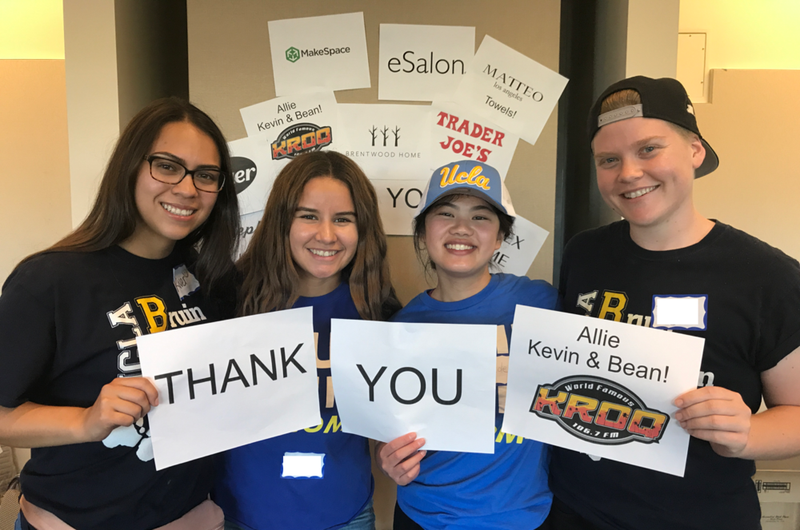 This morning Kevin introduced us to Noah and his little brother Max Tingle from Central, Louisiana. Every day when 12-year-old Max gets home from school his older brother 17-year-old Noah greets him at the bus stop wearing a different costume. It’s the sweetest thing to watch and funny too. This is Noah’s senior year in High School and he wanted to make it special and bond with his brother Max a little more. Rain or shine Noah is there to greet him when Max comes off the bus. They now also have a Facebook page called The Bus Brother with hundreds of followers. People have also started donating costumes too. Noah doesn’t know how long he will keep this going, but he wasn’t to make sure Max has plenty of good memories before he leaves for college next year regardless of how goofy they may be. As much as he’s trying to embarrass his brother, he’s also there for him every day when he gets off the bus. This was Kevin’s GREAT NEWS!!!

Bean brought our attention to a charity that supports the men and women of the military, and today he spotlighted one called Support The Enlisted. It is a charity where you can nominate someone who is currently serving or someone who needs help. Raven Smith from Torrance was recently nominated. Smith was an 11-year veteran who was deployed twice to combat zones in Iraq. She is an Army veteran who has been without an automobile for a year. She lost her car when she was taking her daughter to a doctor’s appointment and the engine seized up. Since then she’s been walking almost an hour back and forth to work. All-State Insurance sponsored this and 20 technicians from Caliber Collision in Torrance restored a car for her. They brought her to the location and gave her the car. It was a big surprise and she teared up when they presented the car to her. This was Bean’s GREAT NEWS!!!

Allie told us this story about a year ago and the Kevin & Bean, as well as the KROQ listeners, came out in full force for this one. A woman named Tania Suster saw a video for a program at Fresno State University where they made life a little easier for incoming freshmen who were moving into the dorms that have aged out of the Foster system. These are kids that do not have anyone that they can rely on for any kind of support once they are 18 years old. So she decided to do something like this locally. The Door Room Drive, now going on its 3rd year focuses on the Foster Youth that has made it into UCLA. They do not have parents or anyone else that will drop them off at college and help them get the school or living supplies. After overcoming so many obstacles in the Foster Care system these kids are inspiring and this program does incredible things and buys everything for them. Please go to fosterkidsucla.com to donate. It costs about $500 just for the basics: sheets, towels, mattress pads, extension cords, toiletries stuff that they need and they don’t have. This year Sept. 19th and 20th is Move-In day at UCLA and they will have people who will make their beds for them and will offer moral support. This group will have everything there for them on their first day. Donate on Venmo, go to the registry, buy specific things, their website makes it so easy. The Kevin & Bean and KROQ listeners helped so much last year. This was Allie’s GREAT NEWS!!!

For more Great News stories check back every Monday morning.