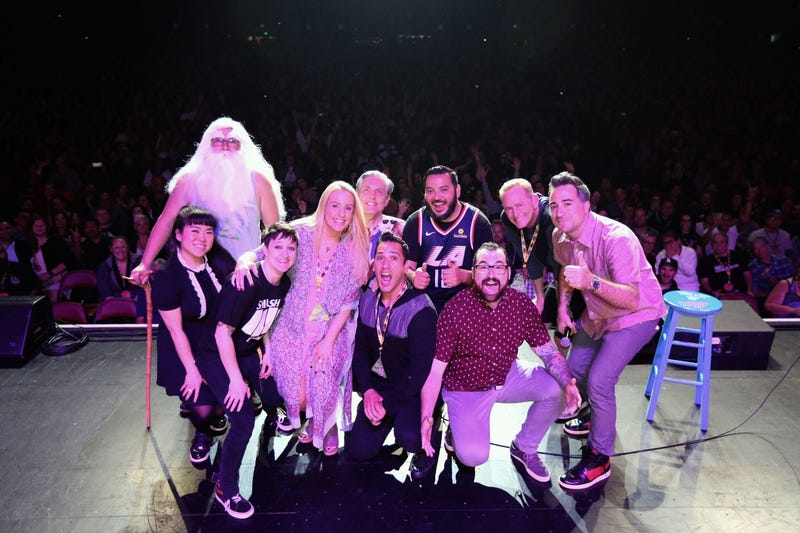 There were a couple of plot lines going into the 11th annual April Foolishness at Microsoft Theater that had the potential of making this Friday night one that would really stick. Packaged with a stellar bill of comedians, Kevin and Bean would finally square off in the ring for their highly anticipated rap battle and the result was equally hilarious and heartfelt. Coupled with the antics onstage, fans had the satisfaction of knowing that over the course of these 11 yearly events, Foolishness has raised a combined total of over a million dollars for deserving charities. As for Foolishness number 11, it’s time to see just how well it ranked. 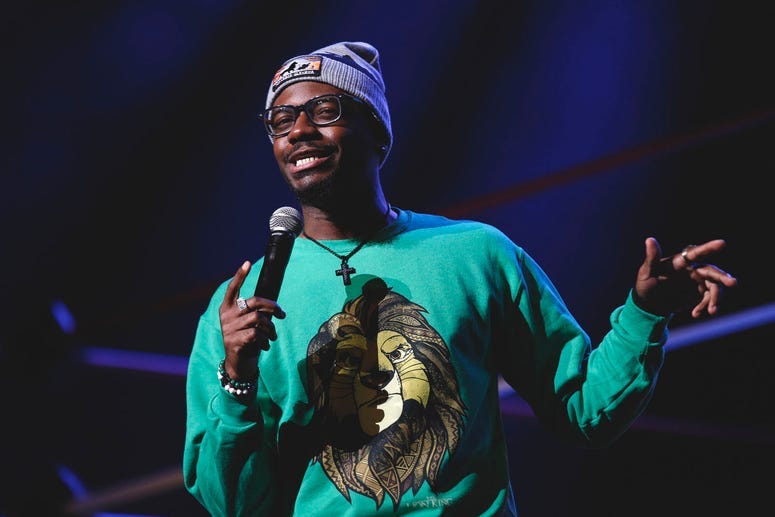 The winner of Kevin & Bean’s Opening Act Contest, Jordan Conley’s reward was the daunting task of warming up some 5000+ fans that hadn’t finished their first drink yet. Despite those odds, the self-professed Disney kid quickly won over the fans with his healthy sense of self -deprecation. The eldest son in a military family, Conley’s desire to be tough is met with an honest sense of self and he used the Liam Neeson action franchise, Taken to better explain. “My friends asked me, ‘what would you do if you had a daughter and someone kidnapped her?’ To which Conley quickly quipped, “I would have me another daughter.” 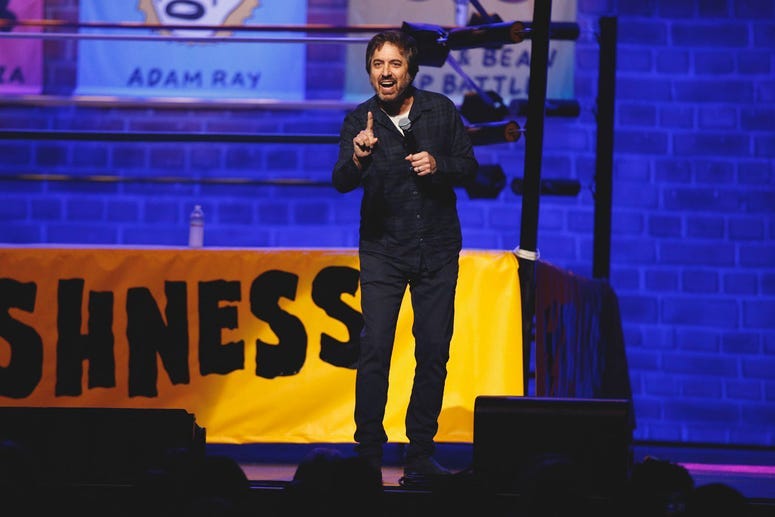 Within the first few lines of Romano’s set, it's understood that his humor really is rooted in narrative. Everyone really does love Ray and it’s likely because most people can in some way relate to Ray. Even in how he discusses his marriage, he doesn’t give an exact number of years, he gives this as a frame of reference, “My wife gets mad at my sneezes. I get one ‘God bless you’ then it’s “Go to the other room.’”

Romano better referenced the length of his marriage by explaining it has spanned the length of three dogs. This segued into a brief lament as to why dogs get only 15 years on earth while the tortoise gets 200. In further assessing how dogs might have been shortchanged due to their short life span and inability to eat chocolate, Romano did present this thought, “Would you rather eat be able to eat chocolate or be able to lick your own balls?” Laughs ensued.

Ray also discussed his occasional frustrations as a father and the realities that come with parenting young adults. Brilliantly illustrated via a simple math lesson, Romano detailed a story in which his 23-year old son called him from the road with 14 miles left to his destination and just 2 miles worth of gas. Ray detailed that his son’s new girlfriend had called him over to visit and, “He did some math. He has 14 miles to drive. 2 miles worth of gas, $0 dollars on his debit card and his d**k yells at him, ‘We can make it!’” 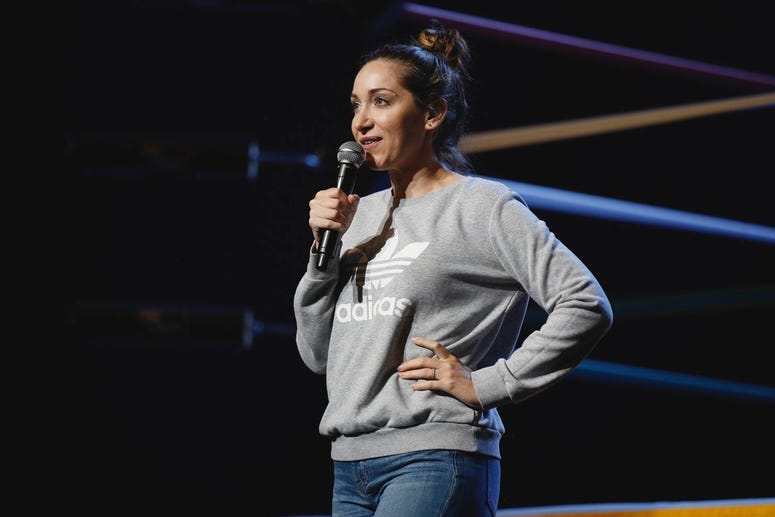 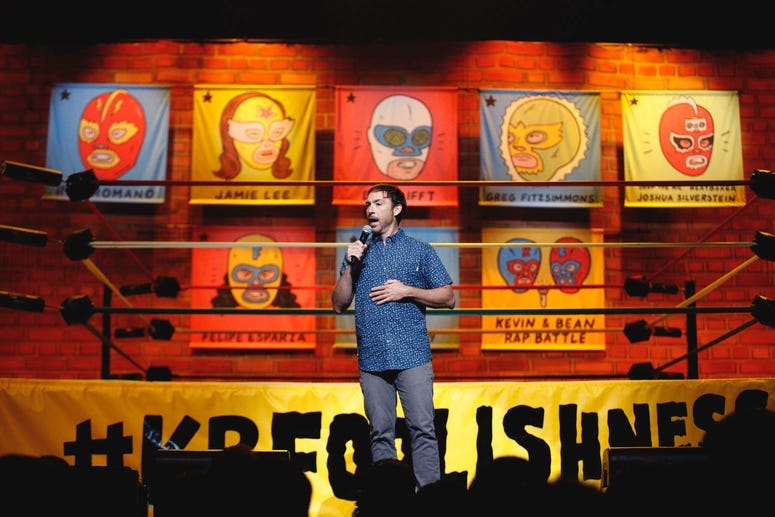 Ifft wasted zero time and got right into it. “I know what I look like. I look like a guy that just got his skateboard stolen.” His accurate observation set the tone for a 15-minute set jammed with pearls that included, but was not limited to,

Ifft would round out his time graciously by complimenting the big crowd and comparing this room to the last room of 5,000 he performed for. Recalling a trip to Mumbai, Ifft talked about Traveler’s diarrhea and how unchecked material could really make things awkward in India. “Five thousand people in Mumbai and my first joke onstage, ‘I don’t know any of you, but I’ve talked to most of you on the phone.’” Ifft chuckled, “You haven’t lived until you have had 5,000 Indians boo you.” 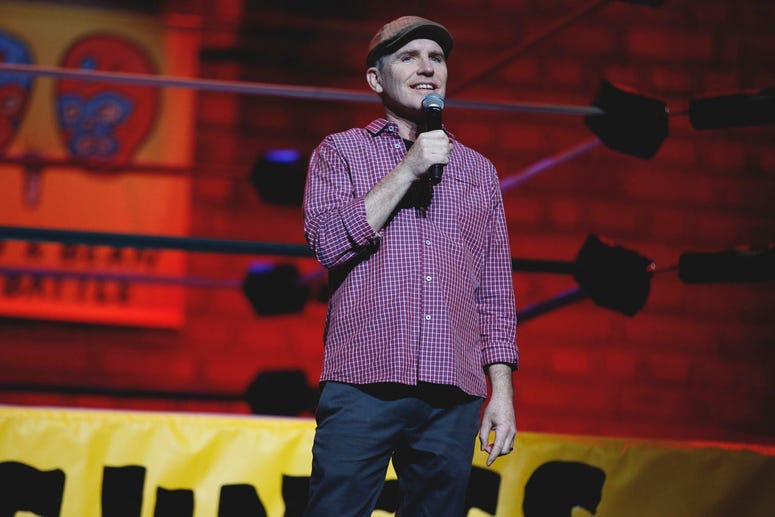 It’s up for debate but it’s pretty likely that Fitzsimmons checked in the single best quote of the evening. Here is how the quote reads alone,

Inserting the quote back into a story, Greg was discussing having recently spent some quality time with his kid at the beach. He talked about how there was an attractive young lady that had a bit of a wardrobe malfunction amongst the waves which gave both Greg and his son, an unexpected peek. Greg caught it and shared the info with his son. “It was the closest I felt to my son. I felt like it was going to be a moment we would share on my deathbed.” (Now insert the above quote once more.)

Greg would keep on with a set of sunshine and rainbows by bashing the universally beloved pastime of baseball for having a lackadaisical pace. While explaining how the pitcher, catcher, and batter all seem to make fans wait without any regard, Fitzsimmons offered a solution by posing a question to the crowd, “How do you feel about performance-enhancing drugs in sports? Greg made it clear. “Performance ENHANCING drugs. These are the guys that used to f*** my girlfriend and beat me up, I want them to run faster, hit harder, and die. 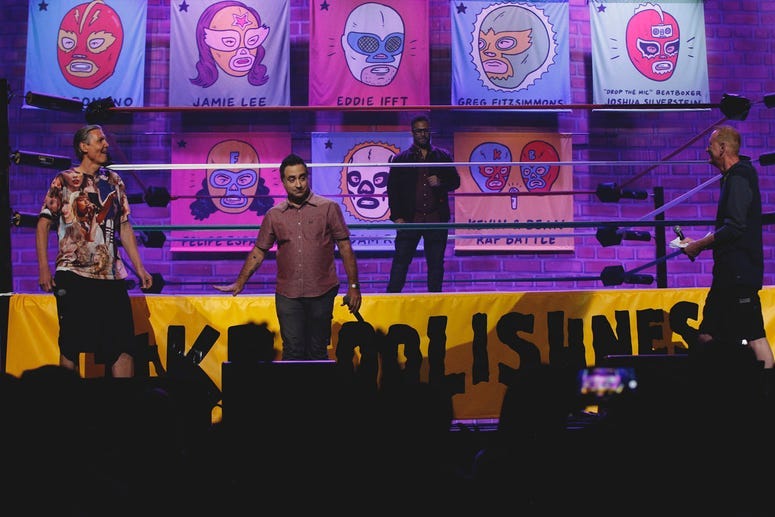 The terms of the faceoff were simple, both Kevin and Bean would be given three rounds apiece to verbally dropkick their opposition into submission. With the help of Jensen Karp and beatboxer extraordinaire Joshua Silverstein of the TBS series Drop the Mic, Kevin and Bean held no punches.

Round 1 - Bean draws first blood by asserting that Kevin can’t write raps because he could barely read. (Posse goes ham). Kevin responds by getting personal. Suggests that Donna (Bean’s Wife) has to be blind to be with Bean. (Everyone oohs)

Round 2 - Bean lands a haymaker. Tells Kevin he is so white he “gizzes mayo.” (the theater loses it) Kevin reminds the room about Bean’s infamous fall off the stage. (the place is in hysterics)

Round 3 - Bean dropped the mic with a “Sickle. Penis. Boom!” Kevin concedes the battle but not before prompting the entire theater to give Bean a standing ovation for his “30 years of greatness.” 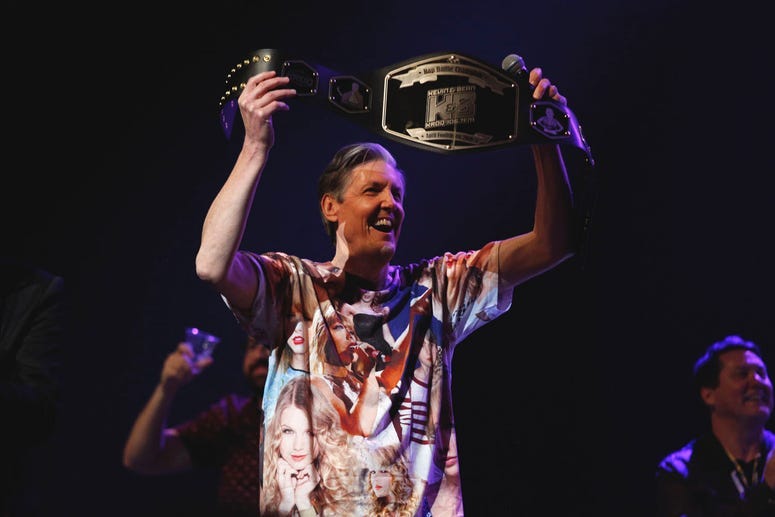 THIS was the highlight of the night. 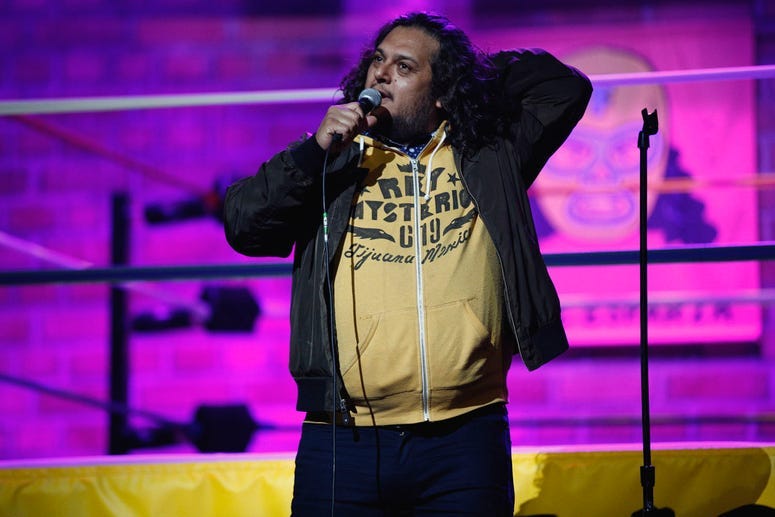 How the hell do you follow up the Battle of LA’s OG DJs? Felipe had an endless barrage of quotables that did the trick.

Felipe reminded us that the best holiday to hide a Cocaine addiction is Christmas Eve.

Felipe provided advice for parents who are too stupid themselves to help their struggling kids, “Make friends with Chinese people.”

Felipe explained that ugly guys that land hot chicks didn’t score, they just found a girl that gave up on life. “You aren’t Vegas, you’re Barstow.”

Felipe explained that a joke that doesn’t work is like watching a stripper fall. “I want my $20 back.”

Felipe confessed to wearing size 44waist/29leg. “Mathematically, my waist is taller than me.” 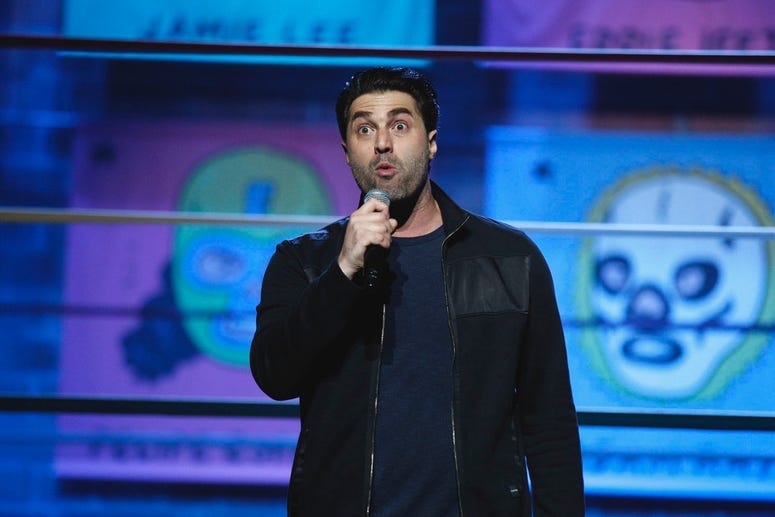 Capping off a fantastic Friday night, Adam Ray delivered big laughs and a few pretty damned good ideas. Somewhere between finding poop in a urinal at LAX and getting high and going to Olive Garden, Adam brought up the idea of being able to opt out of a conversation with your Uber driver, which is freakin’ genius.

Adam also confided how he continues to find out more about himself. For instance, Adam walked in on his friend and fellow comedian Brad Williams having sex. The revelation was something Ray admits he didn’t have on his bucket list but quickly went home and added after the fact.

Ray wrapped his time with an endearing story about a special needs coworker named Brian. The two worked bagging groceries together at Albertson’s in the late 90s. Ray explained that Brian was the kind of positive spirit that could make even the most humdrum job enjoyable. That optimism would be tested one day when Brian dropped three different jars of pickles in succession, prompting a customer to call him a “retard.” Ray remembered that even then, Brian remained professional and explained that he was human and susceptible to make a mistake.

Many years later, Ray would run into Brian again. After catching up some, Brian would ask Adam a couple of questions. 1. Did Adam get to meet Harrison Ford yet (the randomness scored belly laughs) 2. Did he ever tell any Alberston’s jokes?

While Adam couldn’t admit to finding much humor in working at the grocery store, Brian then asked if Adam remembered the pickle incident to which Adam replied, “I think about that every single day.”

Brian then confessed that he dropped the pickles on purpose for the laughs. The house roared in applause.