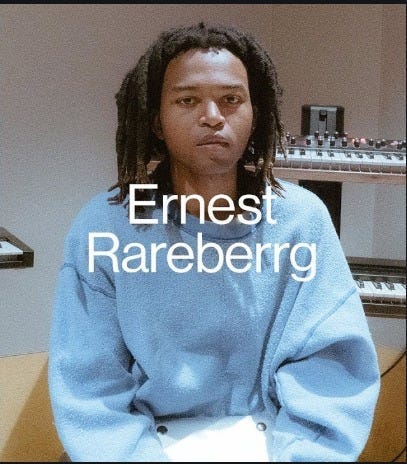 This week Jensen brought us a do it yourself hybrid artist from East New York. He’s at the beginning of his career and his name is Ernest Rareberrg. While he may only have 419 followers on twitter, he was just named a Best New Artist on the Pigeons & Planes Blog, which is a big honor at such an early stage in his career. He’s also the first artist that Jensen has featured in this segment where Google asked if he meant someone else.

Officially he’s only released three songs on streaming services, and the combined running time of those three songs is only six minutes. In any other period in time, that would probably only be one song. However, the diverse direction and unique sound of those six minutes of music are so impressive, you won’t believe that the three songs are done by the same person. He was recently featured by the tech company DropBox. They flew him and his producer out to Los Angeles and they created a bunch of content with him. If you Google his name, you’ll see a lot of the search results from that collaboration.

In previous Get Up On This segments, Jensen’s talked at length about the definition of Alternative Music in 2020. Jensen thoroughly believes that it’s currently an evolving genre and that it no longer belongs to bands like the Foo Fighters or Red Hot Chili Peppers. It now includes artists like Cherry Glazerr, Dominic Fike, Billie Eilish or even Tyler the Creator. We’re now in an iPhone playlist generation where Ernest Rareberrg is a perfect example of defying genres and moving in and out of them. He can switch in and out of ballads, or a dance-rock song or anything else.

The first song we listened to is called Show Me Your body. It’s different, odd, strange and totally rock with guitar riffs.

The last song we heard from Rareberrg was called Travel.

Jensen can’t emphasize enough that artists like Ernest Rareberrg are the new face of alternative music unless you want to stay stuck in the past. All the Boomers that continue to make fun of the younger generation of alternative artists like Billie Eilish, Omar Apollo, or any other musician who’s grown up on hip-hop, pop, and even rock music, will be left behind yelling about their lawn. You can find all three of his songs on any of the streaming services. He has more songs on his SoundCloud page as well, but not many. He also hasn’t released any music in the last six months, which makes people think he may be releasing something new very soon and Jensen couldn’t be more excited to hear it. His name is Ernest Rareberrg and he’s Jensen’s Get Up On This for this week.