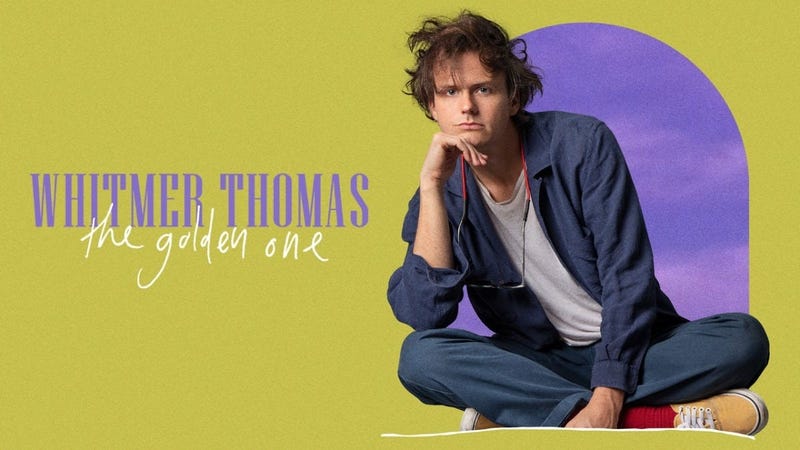 Every Thursday morning Jensen brings our attention to something that we may not know about yet or something we may have overlooked in the past.

This week Jensen brought us another great in-studio guest. We were introduced to Whitmer Thomas, an LA-based comedian who is part of the collective, Power Violence. This Saturday night, HBO will be airing his first one-hour comedy special called, The Golden One. The Golden One is executive produced by Bo Burnham and produced by A24. Bo had seen this performance and instantly knew that it should be something bigger.

The Golden One is a high concept comedy show. For those unfamiliar with Whit’s style of comedy, it has several layers to it. Aside from the normal jokes that he tells in a stand-up format, he plays music with a guitar and sings humorous songs. And for his special, Whit and his friend Clay created a documentary aspect to the show as well, detailing some very emotional and traumatizing stories from his childhood in Alabama. He gives his family members, usually seen only as the butt of his jokes, an opportunity to present themselves as actual people and tell their story. Whit goes home to perform at a venue called The Flora-Bama, where his mother used to perform, as a local rock-star in a band called Sin Twister. Whit’s mom has since passed away from battling her own demons, and in turn, Whit is forced to face many issues, one of which is his aunt (who happens to be his mom’s identical twin sister), who he hasn’t spoken to since his mom’s death. Originally Whit wanted to honor his mom by performing at the venue, but in order for him to do that, he had to go through his family members to get their approval.

This idea was all triggered 3 or 4 years ago when Whit was sent VHS footage of his mother performing at The Flora-Bama. After watching the footage, Whit admits going down a depressing dark path that inspired a lot of the material for the special. In it, he includes a song called “My Mother died Partying,” as well as a story about Whit being kidnapped when he was 3 years old. Through all these stories, Whit understands that people go through trauma and grieve in different ways. He also thinks that people deserve a second chance if you feel you’ve been treated poorly.

To put together a stand-up comedy special is one thing. To put together a documentary is another, but to put them together in one (and include musical performances) is something truly emotionally draining. It’s something that’s never really happened before in comedy. It’s multi-layered. You will laugh, you will feel and by the end, you may even experience a moment of healing. Whit’s goal for this special was for him to confront his own demons and he hopes that people watching it will also feel healed. The special airs on HBO on Saturday at 10 pm. After airing, you can find it on their streaming platforms as well. Jensen could not recommend it more.