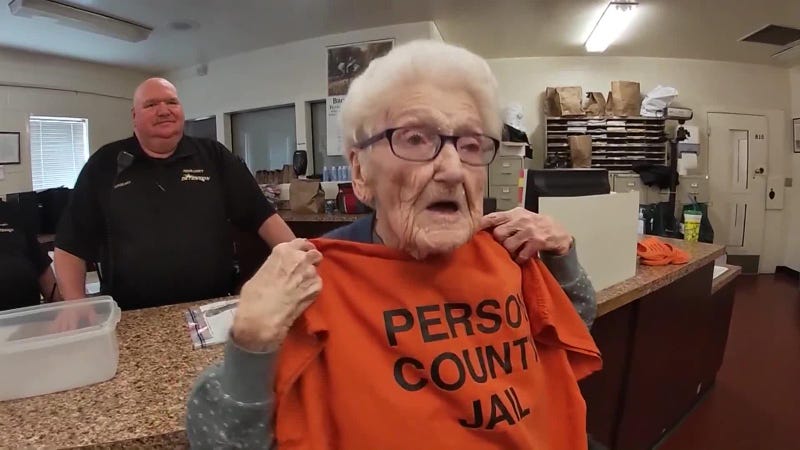 This morning Jensen introduced us to 100-year-old Ruth Bryant. Cambridge Hills Assisted Living Center decided to throw her a party. She had one more thing that she wanted to scratch off her bucket list. She wanted to get arrested. During her party, two deputies walked into the celebration with a warrant for Bryant. They put her in handcuffs and arrested her for going to the fire department a few weeks ago and exposed herself. She was handcuffed to her walker, taken to the jailhouse in a cop car, fingerprinted, photographed, stripped of her jewelry, given one phone call, and they could’ve added resisting arrest because she started kicking the officers as well. She spent time at the police station learning about what they do and they even gave her a souvenir prisoner jumpsuit. After her field trip, she was brought back to the assisted living facility bail free and excited to get one more thing checked off her bucket list. This was Jensen’s GREAT NEWS!!!

Today, Kevin brought our attention to a pre-calculus teacher at Ramapo High School in New Jersey named Lee Barber apparently fell down a flight of stairs. He cut his head and he had a concussion and needed stitches. He still managed to show up to class the next day to teach, even though he had a concussion and stitches. The class was going through an important part of the coursework, and he didn’t want them to miss out or fall behind. His students knew he was a huge Yankees fan so, to show their appreciation, the students surprised him with the tickets to opening day. The Yankees heard about this and sent the class a video message from Boone inviting Barber and the students to the second game of the season and inviting them to batting practice before the game. Mr. Barber turned to the students and said, “All right, you all get A's. Forget it.” This was Kevin’s GREAT NEWS!!!

We saw some Ramapo High School seniors surprise their favorite teacher, so we decided to add in a few surprises of our own. https://t.co/wCWWjbZx2b pic.twitter.com/PEOPN7odrV

Allie told us about a nurse at St. Luke's Children's Hospital in Boise Idaho named Joe. Joe goes above and beyond for the children at St. Luke’s. This is a guy that immigrated to the US along with his parents and siblings. He’s been working at St. Luke’s for 16 years. His whole family works there. His brother is also a nurse there in the NICU, as well as both of his sisters, who are respiratory therapists. Here’s what sets Joe apart from the other nurses, he dances a ton with the kids, and the kids love it. He really raises the spirits of the kids because they know they are going to get a special treat. He’s now the star of a new commercial for St. Luke’s Children’s Hospital. Joe knows that treating the patient's illness is one thing, but treating their overall health and happiness is where he can shine. The video is adorable, you can see the kids faces light up as soon as he walks in. Shout out to all the nurses out there and especially to nurse Joe. This was Allie’s GREAT NEWS!!!