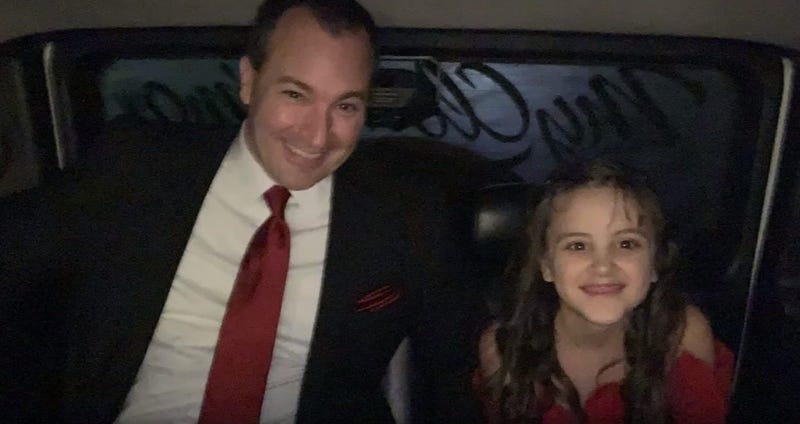 This morning Kevin introduced us to Natalie Reilly from Arizona. Reilly first started writing thank you letters to first responders and veterans with her mom. While her mom is no longer here she continues that tradition. She may have lost her mom, but she has gained a community in return. She’s also started a charity Nothing But Love Notes. People can go to their website and leave notes and she will get them to first responders. Not only has this helped thousands of people, but this labor of love has also helped her find love as well. Her new boyfriend is a retired police officer that received one of her letters last year. This was Kevin’s GREAT NEWS!!!

Today, Allie brought our attention to 8-year-old Avey Cox from Van Buren, Arkansas. She always dreamed of going to the annual Daddy-Daughter Dance at her elementary school. Sadly Avey’s father passed away during the holiday season and her dream of going to the dance was crushed. It was a local area Police Chief that pitched the idea to his officers. He asked if anyone was willing to volunteer their time to escort students to the dance who don’t have dads or father figures. Cpl. Nick Harvey immediately thought of his three daughters who he used to take to the event every year. As soon as he heard about Avey, he knew he needed to make it happen. The pair made sure to coordinate their outfits, rode in a limo and had pizza before going to the big dance. They danced all night, and the ride home was in a police car. Harvey even promised to take Avey to all other Daddy Daughter Dances in the future. This was Allie’s GREAT NEWS!!!

Jensen told us about the University of Southern California (USC) and how they have not had a lot of good public relations recently. They were recently at the center of F.B.I. sting Operation Varsity Blues that caught dozens of parents falsifying applications and test scores and paying their way into the school by pretending to be part of the Athletic Department. Jensen is an alumnus of USC and recently been embarrassed to admit that. With several Presidential candidates focusing on making college affordable or free and eliminating debt, you have to wonder what the future of these institutions of higher education is going to be. Well, USC has just recently announced that they are doing something about that. They are making the school more affordable for those who need it. In an absolutely revolutionary move, last Thursday it was announced that future UCS students with a household income of $80,000 or less will be able to attend tuition-free. They are also eliminating a house ownership clause as well. It will begin with the students who start school in the fall of 2020 and Spring 2021 semesters. USC estimates that one-third of the new students will benefit from this adjustment. Tuition for UCS is currently $57,000 dollars per year. With room and board estimated at an additional $16,000 more. It’s awesome, let’s hope that school across the country are able to follow suit with this because it will make college obtainable for everyone. This was Jensen’s GREAT NEWS!!!