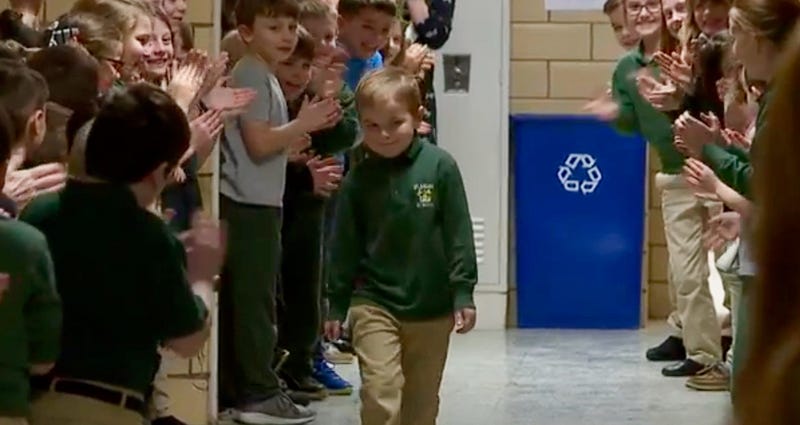 This morning Kevin told us about John Oliver Zippay. He is 6 years old and for 3 years he has battled leukemia. He just finished his last round of chemotherapy and came back to school at the beginning of the year. At his school, St. Helen Catholic School in Newbury, Ohio, students, parents, and staff lined the halls and welcomed him back with a standing ovation because he has beaten leukemia. The past 3 years have not been easy for the Zippay family. He was diagnosed on November 1st, 2016 with acute lymphoblastic leukemia and spent 18 days in the hospital, followed by several years of chemotherapy. He also had a meta-port and wasn’t able to join any of his classmates or do any activities his friends were participating in. The celebration also included an assembly that played a montage of Zippay’s fight against leukemia. He’s happy to be back and excited to rejoin his friends at school too. This was Kevin’s GREAT NEWS!!!

Jensen brought our attention to 5-year-old Katelynn Pardee. She’s a kindergartener at Breeze Hill elementary school in Vista, Ca.  She overheard a parent say that she was having difficulty paying for an afterschool program for her child. So, she started asking questions and decided that no student that she is friends with, or that she goes to school with should have to deal with that. So on December 8th she and her mom set up a stand and sold hot cocoa, cider, and cookies. They made $80.00 and decided to donate it towards paying off the negative school lunch balances of 123 students at her elementary school. Now, her next goal is to pay off the entire negative school lunch balance for the remainder of the students at her school, and the thousands of negative school lunch balances in the entire Vista Unified School District. She’s also started a social media campaign, #KikisKindnessProject, to encourage other students and staff to participate. Once all the district school lunch debts are paid off, she plans of funding other school programs that have been removed because of budget cuts. This was Jensen’s GREAT NEWS!!!

Allie told us about Melvin Bickel. He’s been married to his wife Louis for 64 years. Every anniversary he drives over an hour away to Scott’s Floral and Gifts in Danville, Pennsylvania to pick up flowers for Louis. This year he got her 64 different roses to celebrate their 64 years together. It all started with a dozen roses every year, then when it got to year thirteen, he just added an extra rose just to be different. He’s been adding one every year, and this year it was 64 beautiful roses. Louis appreciates it and looks forward to it every single year, and they love each other very much. This was Allie’s GREAT NEWS!!!