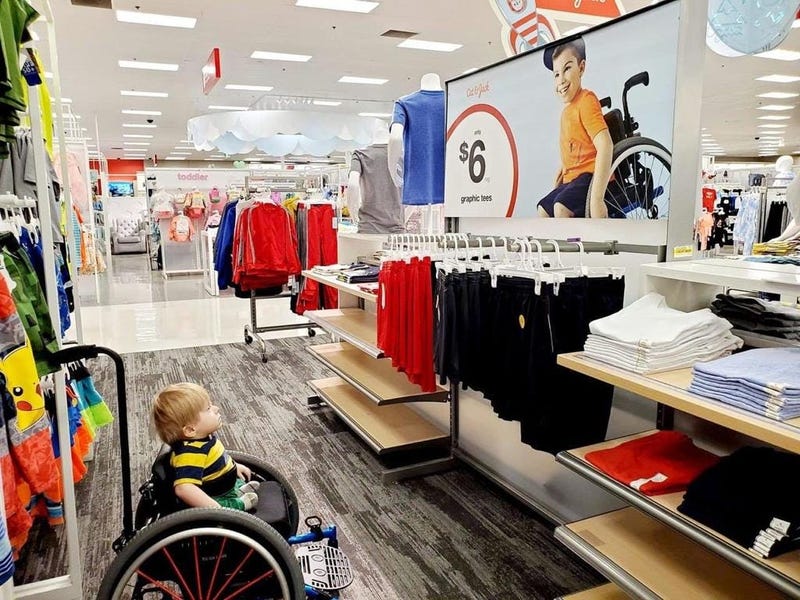 This morning Jensen introduced us to John and Charlotte Henderson. They have been married for 80 years, and they’ve already been recognized by Guinness World Records last year as the oldest living couple on Earth. John is 107 and Charlotte is 105-years-old. They first met at the University of Texas and immediately knew they had met someone special. Charlotte says that she still gets a hand-written Valentine’s card with a love note inside. Although they’ve never had any children, they have been happily retired since the ‘70s. Despite their age, they are extremely healthy. John was asked what life would be like without his special valentine. For their anniversary celebration, John picked up Charlotte the same way he did on their first date. Driving a 1920’s roadster and carrying a bouquet. This was Jensen’s GREAT NEWS!!!

Today, Allie brought our attention to a photo of Oliver Garza-Pena who was stopped in his wheelchair to look up at a display that Target had of another little boy in a wheelchair. It made Allie’s heart swell because Representation really does matter, and representation of all kinds absolutely matters. This is something that Target stores are really good at, making sure everybody feels welcome, not just in their stores, but also in their advertising. Oliver’s mom snapped a picture of this and posted it to Facebook and wrote, “Today Oliver stopped me dead in his tracks and turned back around to see this picture that he spotted!” She wound up hearing back from the mother of the model in the display. His name is Colton and she replied with, “I’m that little boy in the Target display’s mom, and this picture has me in tears. Tell Olly that he can do anything he puts his mind to.” Then people started posting pictures of their kids looking at advertisements that they related to. This was Allie’s GREAT NEWS!!!

Kevin told us about Caren and Dustin Moore, who in November were flying home to California after adopting an 8-day-old baby girl. Kevin has been in this position before, and he knows, that these new parents knew immediately that everyone on the plane hated them. He offered apologies on their way back to their seats, “I offered numerous apologies to passengers while maneuvering the aisle with four bags. About mid-flight, our daughter awoke and politely informed us that she wanted a new diaper. After inquiring about a space for a diaper change. A flight attendant named Jenny cleared space in the back of the plane and gave them privacy.” He changed his daughters' diaper and a flight attendant named Bobby greeted them with a warm smile and enquired about their daughter. He congratulated them before walking away. A few minutes later, and to their shock, Bobby’s voice came over the intercom announcing the Moore’s adoption and the plane erupted in applause. Bobby then passed out pens and napkins so other passengers can write notes of encouragement for the new parents. Bobby and Jenny collected over 60 napkins and it was also Bobby’s way of paying the kindness forward because the same thing happened to him and his bride when they were married. They had made an announcement and people wrote down their messages of support. So he made sure the same thing happened to this couple. This was Kevin’s GREAT NEWS!!!

It’s been a difficult week.

But, rather than publicly air my grievances, I’d like to share w/ you the kindness strangers offered us the day we brought our daughter home.

I hope our story uplifts you, and reminds you there is goodness to be had in this world.