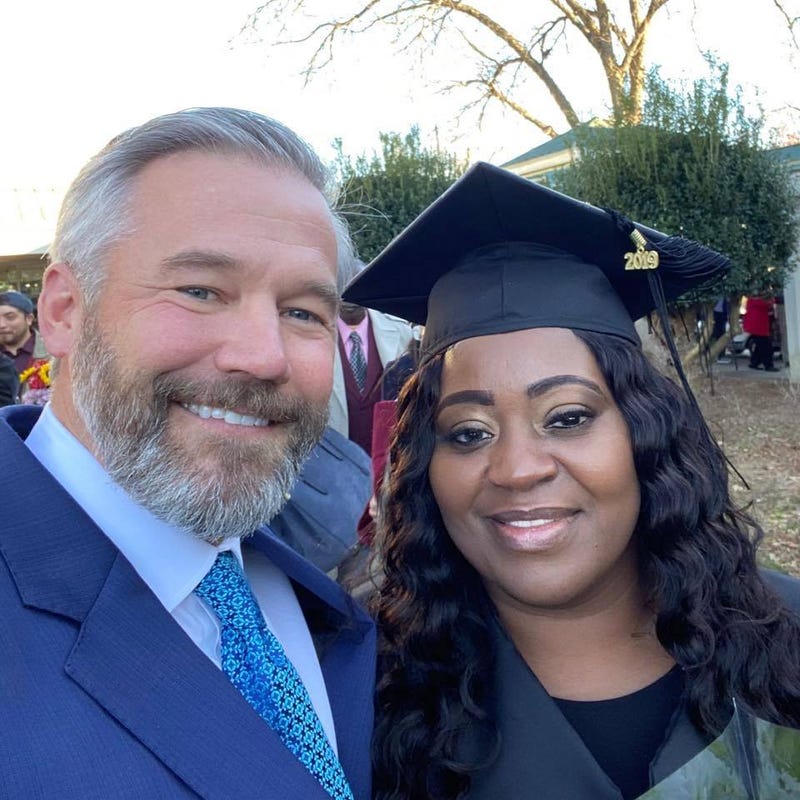 This morning Jensen told us about Latonya Young. She is a 43-year-old hairstylist by day and an Uber driver by night. A single mother who dropped out of high school to raise her first child. Recently she had to drop out of college because of an unpaid $700 balance. She’s been working hard to pay that balance off. One day a year and a half ago, she picked up a passenger at Atlanta’s Mercedes Benz Stadium and their conversation got deeper than most. She told him about her unpaid balance, and a few days later she received a call from the school letting her know she could enroll in classes because the debt had been paid. The passenger Kevin Esch was the person that paid it off. Last week Young earned her Associate's Degree in Criminal Justice. Throughout the entire time, the two kept in touch. So much so, that this past December he attended her graduation ceremony. This was an incredible story of individual charity. She is now looking into Law Schools. This was Jensen’s GREAT NEWS!!!

Allie brought our attention to Mark Miller who lost his 7 ½-year-old daughter in 2013. He knows first-hand that the holidays are not always easy especially if you are the parent of a sick child. So he decided to do something about it. He wanted all the kids at Children’s of Alabama hospital in Birmingham to experience Christmas. He got together with his colleagues at ACE Hardware and they asked store owners for tree donations. He and his team received 285 tree donations from 25 store owners to create a makeshift tree farm right there on the hospital grounds. The kids who were healthy enough came outside and picked out a tree and to bring to their room to decorate. They had different color trees and Santa Clause was there. They had an experience that let them know that they were not alone and bring them some holiday cheer as well. This was Allie’s GREAT NEWS!!!

Kevin told us about Australia and about the devastating wildfires that are currently destroying that continent. He, like many of us, wants to help and knows that he should be doing something to help but didn’t know where to start. He didn’t know what charities to donate to and if they would even use the funds correctly. Jensen also added that it felt overwhelming and that it was difficult to decide where to contribute to be able to make a difference. All that changed when he found comedian and friend of the show, Eddie Ifft’s Instagram post. He posted a very informative message with a link to easily explain what charities you could donate to and what the donations will go to. We also had Eddie on the phone to further explain the importance of helping and contributing to all these charities. Eddie has also committed to donating the proceeds of all of his merchandise sales to these charities as well. Eddie posted CBS’s list of all the charities to let us know where we can help. This was Kevin’s GREAT NEWS!!!