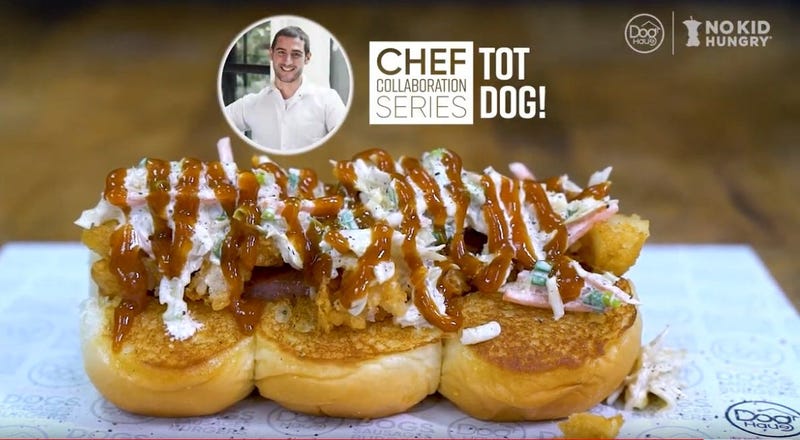 We’ll start off by kickin’ it down under where the Outback Steakhouse waiters really do speak with an Australian accent. In New Zealand, Burger King is introducing a french fry sandwich adorably called the Chip Butty. Butty is a term for a sandwich out there. It features the chain’s crispy golden fries, mayo, and ketchup, sandwiched between two soft buns. That’s right, no meat, just French fries in between burger buns. Where is the beef, indeed? It’s currently only in test stages and costs only $1.30. French fry sandwich, what a surprise, or tie me down and papercut my eyes! The Burger King Chip Butty, Eat it or Beat it? Here’s our take:

Kevin would have to try that, so Eat It!

Beer Mug was almost swayed away by not having any meat, but fries on a bun, Eat It!

Allie would not eat it without meat and the fact that it’s all carbs. is a no, so Beat It!

We move on to Carl’s Jr. on this side of the world. Jensen introduced us to the nationally released, The Big Fried Cheese or the BFC. This plan involves the bread more than anything else because the cheese is a separate patty consisting of cheddar cheese and mozzarella coated inside of a seasoned bun and deep-fried until crispy and golden brown. It’s a whole separate patty of cheese. Here’s what Joey’s World Tour Joey’s World Tour Food Reviews had to say about it as he was sitting in a Carl’s Jr. parking lot and just took his first bite. You could order the BFC cheese patty with the Angus Thickburger the Frisco breakfast sandwich or just add it to any of Carl’s Jr. burgers or breakfast sandwiches for $3.00. It’s available now everywhere. Buns with cheese it’s what I’m about, or let someone with Mono sneeze in my mouth? Eat It or Beat It? Here’s our take:

Allie doesn’t want anyone with Mono to sneeze in her mouth, so Eat It!

Jensen had Beer Mug at cheddar and mozzarella cheese deep fried into a golden brown patty, so Eat It!

A frequent Fast Food Report contributor is our friends at Dog Haus who love to push the boundaries when it comes to Hot Dogs. Now, for a limited time, they’re offering the newest edition to their Chef Collaboration series, the Tot Dog. In conjunction with Michelin-Star Chef Anthony Sasso, which is impressive. The Tot Dog features an all-beef dog, topped with extra crispy tater tots, celery salt, coleslaw, and haus bbq sauce on grilled King’s Hawaiian rolls. Available through February 29, 2020, at participating locations. $1 from the purchase goes to the No Kid Hungry charity, which is great to battle hunger and helps to feed kids. Tots on a dog that’s a good offer, or let Drake start texting my underage daughter? Eat It or Beat It? Here’s our take:

Jensen had Beer Mug at tots with celery salt and BBQ sauce etc…, so Eat It!

Allie’s a hot dog connoisseur and is definitely Eating It!

Kevin doesn’t think there’s anything that sounds bad about that at all, so Eat It!

Pizza Hut has brought along one of the cheesiest offerings to date. The Mozzarella Poppers Pizza. It’s a mash-up of their popular Mozzarella Popper appetizer and pizza. It features 16 crispy mozzarella-filled squares baked with a mix of garlic, onion, parmesan, Italian seasoning, parsley, basil, and oregano around the crust of a traditional pizza. Available only for a limited time at Pizza Hut. Mozzarella Poppers Pizza, appetizers and pizza that’s the truth, or serve me a smoothie of urine and poop? Eat It or Beat It? Here’s our take:

Kevin doesn’t want urine or poop, he’ll try it, so Eat It!!!

Jensen had Beer Mug at 16 squares of mozzarella, so Eat It!

Allie will eat it, so Eat It!

Papa John’s may not know when the day of reckoning will come, but they have added something new to there menu. They have added the Jalapeño Popper Rolls. The Jalapeño Popper Rolls features Philadelphia cream cheese spread on fresh dough and rolled up with Jalapeños for a creamy kick of heat. Baked fresh with a side of ranch for just $5.99. Jensen doesn’t want to sway the jury, but check out what food reviewer Peep This Out had to say about it. I’m craving the taste of the Jalapeño Popper or I’ll lick the sweaty armpits of John Popper? Eat It or Beat It? Here’s our take:

Beer Mug wants to have a Jalapeño Popper Roll squirt on him, so Eat It!

Allie thinks it sounds so disgusting and she’d rather lick John Popper's armpit, so Beat It!

Kevin would eat it, so Eat It!

🚨 This is not a drill. Introducing new freshly baked Jalapeño Popper Rolls that come with a side of ranch. Yep, freshly baked. Yep, ranch. pic.twitter.com/E8pKduG1qd

Lastly, Mc Donald’s is ready to fill your nose as well as your belly with the new Quarter Pounder scented candles. Each set of custom scented candles come in glass containers and are inspired by sis essential Quarter Pounder ingredients. These are the candles: Bun, Ketchup, Pickle, Cheese, Onion and fresh Beef. No Fries, sorry. McDonald’s recommends burning all six candles at the same time for maximum deliciousness. This is in celebration of the Quarter Pounder’s 50th anniversary and it’s already sold out on the McDonald’s website, but there are already rumors that they may be restocking their inventory. Hamburger candle I’d like to try it or be stuck with Joaquin Phoenix talking about plant-based diets. Smell It or Quell It? Here’s our take:

Allie is going to run through the house with a pickle in her mouth, so Smell It!

Beer Mug loves the Quarter Pounder, but he doesn’t want to smell it, he wants to eat it, so Quell It.

Kevin can’t stay away from McDonald’s enough as it is already, so Quell It!

McDonald’s Is Releasing A Set Of Candles That Smells Like Each Topping In A Quarter Pounder Burger https://t.co/be8XhpPrhK