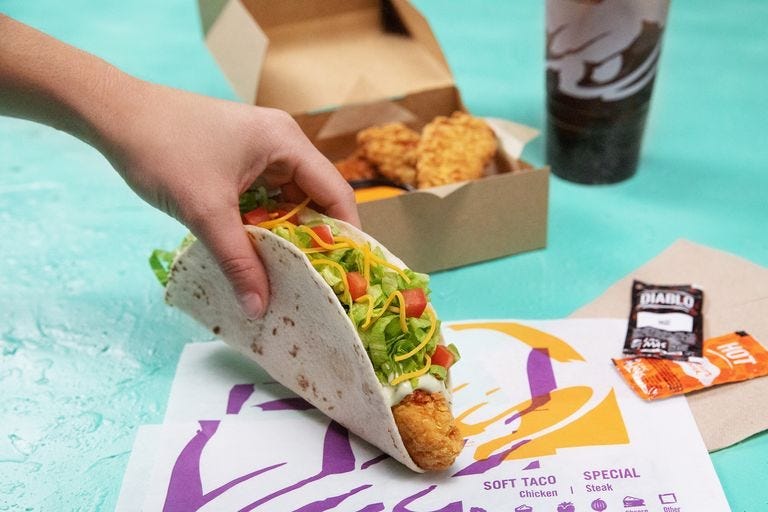 Chick-fil-A is reintroducing the Peppermint Chocolate Chip Milkshake. The handspun shake features the brand's ice cream blended with bits of peppermint candies and chocolate chips all topped off with whipped cream and a quintessential cherry. It’ll range from $4.05 to $4.59 and runs until the middle of January 2020. Make me a shake with peppermint or give me a break with that pocket lint? Here’s our take:

Kevin would drink it if they can hold the peppermint, so Sink It!

Brad Williams was filling in for Allie today and as a dwarf around the Holidays it seems more appropriate for him to be drinking festive drinks, so Drink It!

Beer Mug says Sink It! And will instead buy a spicy chicken sandwich.

Milkshake Monday, anyone? Your favorite holiday sipper is back! pic.twitter.com/aetOUqGwjr

Next, we travel up north to the Boston Pizza Canada franchise (BTW that’s an incredible name) where it has introduced the Christmas Pizza. The Christmas Pizza comes topped with seasoned rotisserie turkey, house-made stuffing, Rosemary sage cream sauce, and Italian cheeses. Each pizza also comes with cranberry sauce, warm turkey gravy, and a free Toblerone chocolate bar. All this in a limited-edition pizza box that when opened plays the world’s first-ever pizza-themed Christmas carol. It will be available until December 29th. Mashup my pizza with a Christmas Eve, or kill both my parents and don’t let me grieve? Here’s our take:

Beer Mug knows the baby Jesus is rejoicing after everything Jensen just described, so Eat It!

Kevin will eat two of them, so Eat It!

Brad, was out until the Christmas carol box, now he’s in, so Eat It!

Let’s step away from the seasonal and make our way over to Singapore where KFC is taking a bold step into the unknown with their fried chicken. Like Simon Cowell with a Botox appointment, they have decided to do weird things with their chicken skin. They have introduced the Sour Cream and Onion Chicken. This new variation features the brand's hot and spicy bone-in chicken coated with crushed nacho chips deep-fried to a golden brown and dusted with sour cream and onion seasoning. It is truly a Doritos Sour Cream and Onion fried chicken. It’s a limited-time flavor, on-sale until supplies run out. Fry up that chicken with sour cream and onion or get on your knees and lick a homeless man’s bunions? Here’s our take:

Brad loves sour cream and onion chips, so Eat It!

Kevin doesn’t want the bunions, so Eat It!

In a country with such strict rules such as Singapore, Beer Mug would be afraid not to eat it, so Eat It! 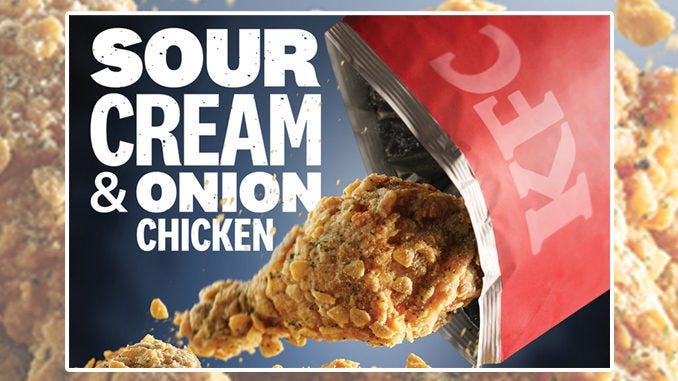 Jack In The Box is testing a new version of their Sauced and Loaded fries, The Philly Cheesesteak Sauced, and Loaded French Fries. It features seasoned curly fries topped with shredded cheese and cheese sauce, grilled onions, grilled green peppers, and pieces of Philly cheesesteak. The only way this could be any more Philadelphia was if you washed it down with Rocky’s sweat. It’s $3.00 and it’s been spotted in Arizona, Cheeses, and steak make my fries hotter or Let R. Kelly go on dates with my daughter? Here’s our take:

Kevin is not an R. Kelly fan, so Eat It!

Brad only gets Philly Cheesesteaks from Philly, so Beat It!

With the “Eye of the Tiger” playing in the background Beer Mug will Eat It!

Taco Bell's in Houston Texas and Dayton Ohio are getting a sneak-peak at an item that will be released nation-wide in 2020. It is definitely a change of pace for the iconic Mexican fast food heaven. Get ready for the debut of Crispy Tortilla Chicken. They are strips of premium all-white meat chicken marinated in a jalapeno buttermilk flavored marinade and coated in crunchy tortilla chip coating. In classic chicken strip form, they will come with a side of signature creamy chili pepper dipping sauce. 2-3 pice orders will range from $3.00 to $4.00. Go to the Bell for a chicken strip or see you in hell you freaking dick? Here’s our take:

We’d ask Kevin but, we already know the answer, so Eat It!

Brad will of course… Eat It!

Finally Sonic continues to push the envelope when it comes to their Slushy lineup. Just when you think they’ve done it all they do something else. The pioneers in the field of ice drinks are rolling out the Red Carpet for the Red Berry Slush. Currently, it’s only a very poorly kept rumor but, expect to see these soon. It’s an ice slushy that features a Sour Patch Kids Red Berry flavored syrup mixed with real Sour Patch Kids candy. They usually run under $3.00, which is a very good deal. Make my Slushy sweet and sour or I’d rather quench my thirst with a golden shower? Here’s our take:

Brad Williams would need it to be served with a side of Insulin, so Sink It!

If there was a Sonic’s nearby, Beer Mug would drink it, so Drink It.

Kevin is going to go on that road trip with Beer Mug to find that Sonic’s and also Drink It! 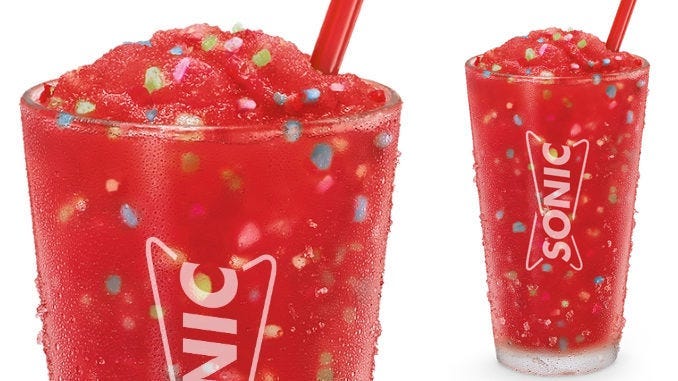