Longtime fans of the band may have had access to some of the “new” tracks through the LP Underground fan club, but there are still some that are seeing the light of day for the first time with this release.

"In my opinion, the best fans on the planet really did put us where we are.” -Chester Bennington

The 20th anniversary release features the band's debut album, their remix record Reanimation, and the original Hybrid Theory EP (released when the band went by the same name, in essence making it a “self-titled” EP), as well as tons of b-sides, demos, live tracks, and more.

One of the new offerings, a demo of the band’s hit single “In The End,” will get even the most reluctant buyer on board. The high-octane track featuring the signature sounds of Mike Shinoda’s smooth rap-flow paired with the late Chester Bennington’s emotional screams may have listeners adding it to their dance playlist. Obviously, the song’s bones are there but the heavy punch added by live musicians and impeccable production for the official release can be heard just lurking in the background.

There are some other choice cuts -- aside from the unreleased demo of "She Couldn't" released to promote the new collection, and which Shinoda admits helped shape the band's sound -- that fans should keep an ear out for.

There's a Marilyn Manson remix of the track "Buy Myself" from their b-sides, and KORN's Jonathan Davis appears on the Reanimation remix of "One Step Closer." The entire six song Hybrid Theory EP on disc three gives a unique look into the band's progression from Xero, their original name, to what would eventually become Linkin Park. Fittingly, the Xero demos on disc six are also a must-listen for those looking to wrap their minds around the inception of the group. 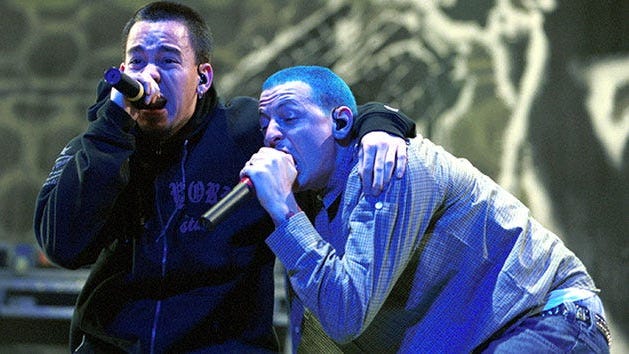 For those looking to go deeper into the band’s history, included in the super deluxe release are three DVDs (2001’s Frat Party at the Pankake Festival, which documents the band’s time on the road, and two which were previously unreleased), a collection of art prints, and an 80 page book to dive into.

Don't miss the band streaming live on YouTube today, October 9, as the surviving members celebrate with fans with a Q&A, that also promises to feature previously unseen concert footage.

You can watch the world premiere streaming event today at 12PM ET with a second showing streaming 12 hours after the premiere. Get your digital tickets at watch.linkinpark.com.