Radiohead released their debut album, Pablo Honey, in 1993, but the seeds for greatness were planted years earlier while the band members were all still in school. Thom Yorke, brothers Jonny and Colin Greenwood, Philip Selway and Ed O’Brien all met and started playing music together while they were teenagers.

As O’Brien excitedly counts down the days until the release of his debut solo album, he’s taking inventory of where he’s been and where he’s going. There have been eight more Radiohead albums since the world first rocked out to “Creep,” which doesn’t leave much time for a 16-year-old turned rock star turned husband and father to discover themselves.

Kevan Kenney of RADIO.COM station ALT 92.3 in New York wanted to know more about that. How does a 16-year-old musician figure out who he is when life is moving so fast?

“The moment we started rehearsing it’s like ‘vroom,’” O’Brien explained. “It’s like this is the most important thing in my life. ‘Bang.’ And we weren’t good. We were s***, but there was this thing and suddenly everything went into focus.”

“And then it becomes a huge part of your character because at that age inevitably you have a few challenging moments or a girl dumps you or whatever; all those massive things because you’re living life as a teenager,” he continued. “You have highs but you also have real lows. But what was great about the band was it didn’t matter how low those lows were. They weren’t low because I had my brothers and I had this music and this band I was in. And I think for all of us it gave us huge strength. We were like this little club… unlikely club because we’re all very different people, but it gave us such strength and such purpose at an age where you don’t have a lot of purpose.” 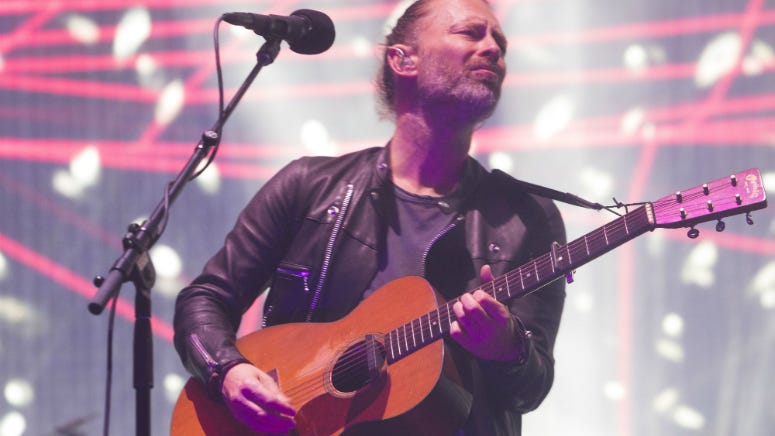 Radiohead became revered by fans and critics alike in the years that followed. O’Brien and company are the furthest thing from a band that cares about accolades and awards, but they couldn’t help picking up three GRAMMY awards along the way and a reservation in the Rock & Roll Hall of Fame. So again, how does a musician that successful stay grounded?

“What happens is you have families, you have kids, and your kids don’t give a s*** about you being in Radiohead. That’s normal to them,” O’Brien explained. “The band is by definition a club. It’s like a gang. And you can’t stay in the gang forever.
You can’t… A gang changes and also a gang hangs out less with one another when you have families. Your family become your gang, and in order to be a good father you have to stand upon your own two feet.”

The 51-year-old holds his accomplishments and friends in Radiohead close, but he insists he is not defined by the band. He called it a massive blessing - he’d be sad if it ceased to exist - but he says he’s not afraid of a hypothetical future without Radiohead.

Here’s the album.. thank you for waiting .. it’s called Earth and it’s coming out on April 17 in time for Summer.. https://t.co/6aKK1PAM39 pic.twitter.com/2SlCKbPcra

In the present, O’Brien is still hungry for new musical experiences, which include the release of Earth under the name EOB. The majority of the album, which will be released on April 17th, was written over the last four years starting in Brazil. O’Brien says he’s thrilled with the way the project came together.

“Recording studios can be quite harsh environments, and I wanted it to be a place of kindness but of truth,” he said. “We got there and I’m really happy with the record we made. It never got nasty and I think that’s what I’m really proud of.”