Chick-fil-A is starting the new year with a sweet deal.

The fast-food chain, known for its chicken, announced in a press release that it would be giving away free chocolate fudge brownies until January 23.

Your afternoon treat is our treat. Enjoy a Chocolate Fudge Brownie - on us.

Create an account or check your Chick-fil-A® App to redeem your offer for one free Chocolate Fudge Brownie from January 11-23.

Chick-fil-A shared that this freebie is a quick way to say "thank you" to its customers.

"Whether it's a smile behind a cow print mask or a surprise treat, we're always looking for ways to show our guests how much we appreciate them," Kevin Purcer, senior director of customer digital experience, said. "We're excited to add a little sweetness to our guest's day."

Chick-fil-A One members can redeem the offer using the mobile app through January 23. The offer can be redeemed at more than 2,600 participating Chick-fil-A restaurants in the United States by scanning or placing a mobile order on the app.

In the fall, Chick-fil-A added dessert and coffee drinks to the menu. 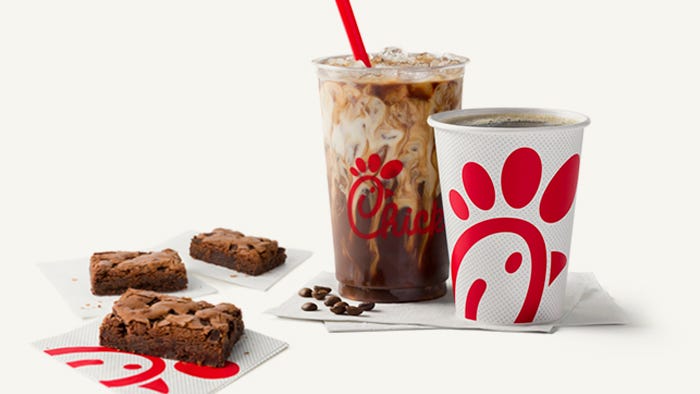 The first addition was the Chocolate Fudge Brownie, a bar of semi-sweet chocolate melted into the batter with chunks of fudge.

As for adding coffee, the chain also launched the seasonal beverage, the Mocha Cream Cold Brew. It's a swirl of cold-brewed coffee, sweetened cream, and chocolate-flavored syrup served over ice.

Chick-fil-A also revealed a new blend of specialty-grade Thrive Farmers hot coffee, which is meant to be milder than the previous edition. It is available in regular and decaf.