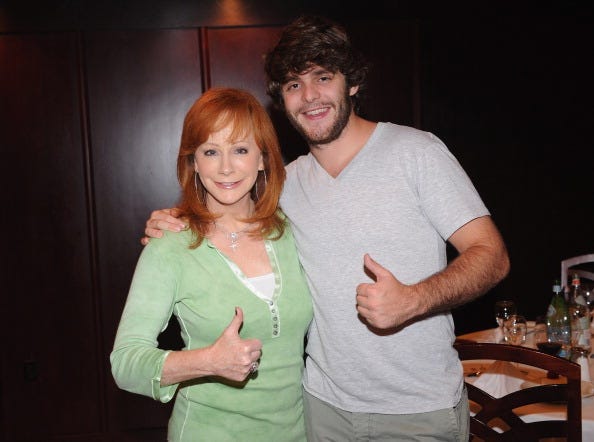 Thomas Rhett's dad Rhett Akins was a country star himself in the '90s, which meant that when Thomas was growing up, his dad had (and still has!) a lot of famous friends, including this year's CMA co-host Reba McEntire.

“Reba’s son, Shelby, I think we’re about the same age, and we were at their Halloween party one year," Thomas recalls in a statement from his label. "And I remember us racing back and forth to this barn, and I think I kept beating him in this race.

"And I think he was a little bit older than me and bigger than me, and he put me up against the wall, you know, around my neck," he continues. "And I remember Reba comin’ over and snatchin’ Shelby off of me and puttin’ us both in timeout.

"I mean, I had to have been five, maybe five, to be put in timeout. I hope that I wasn’t like, nine or something and I was in timeout.”