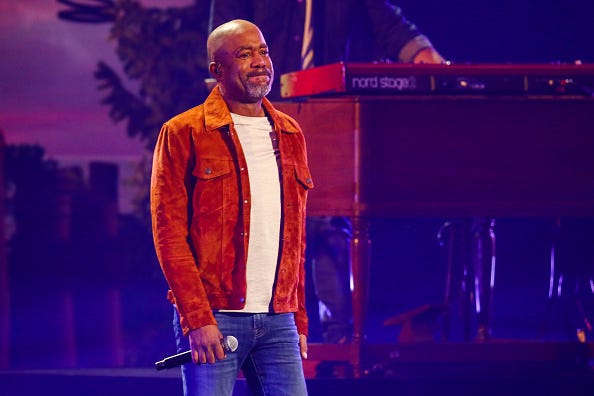 Darius Rucker has yet another huge hit on his hands with "Beers and Sunshine," but the song, which he wrote with J.T. Harding, Josh Osborne and Ross Copperman is unique in several ways.

1. It was the first song he ever wrote and recorded completely virtually.

"After I wrote it, I had a moment of thinking of changing it to ‘Tequila and Sunshine,’ because a buddy of mine thought it was a much better idea, and he still says it all of the time," Darius continues. "But the more I thought about it, I thought ‘Beers and Sunshine’ was the way to go.”

3. It got recorded very quickly.

"I've made a lot of records for my label, and ‘Beers and Sunshine’ is the first time I’ve written a song and send it out to them and they said, ‘Can we get that cut right now?’," he reveals with a laugh. "That was a pretty good feeling."

music
Lady Gaga's stolen dogs have been returned unharmed
sports
Jeremy Lin reveals he has been called 'coronavirus' on the court
music
Lady Gaga tweets ask for the safe return of her French bulldogs, and for kindness
sports
Eddie Murphy confirms Prince beat him at basketball, as depicted on Chappelle's Show
music
D'Angelo helped to usher in the neo-soul movement, here’s how
music
7 of our favorite odd celebrity couples