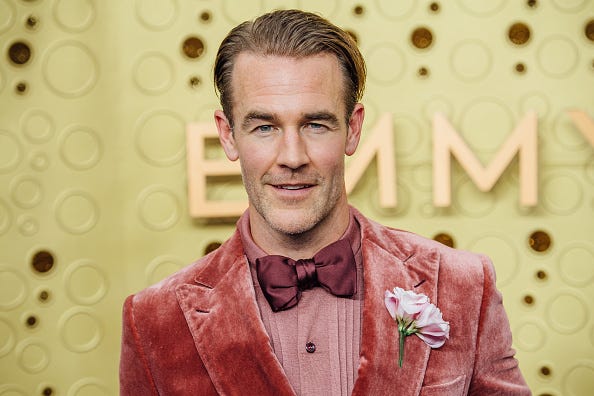 The former "Dawson’s Creek" star talked about the viral meme and admitted he has a good sense of humor about it and believes it’s a career highlight.

"I don't really hate it," he told Page Six. “As an actor you travel and you do some roles and you put yourself into it and you try to be as sincere as possible and you never know what's going to stick."

“So I think when anything sticks it’s a compliment and I think it’s used so hilariously. It’s used to mock people, it’s used for weird ’90s quirks. I get a kick out of it actually when I see it,” he revealed.

The meme came from the iconic WB series that James starred in from 1998 to 2003.

This isn’t the first time James has expressed his enjoyment over the meme.

When the cast reunited in 2018 to celebrate the show’s 20th anniversary with Entertainment Weekly, he said it’s his “favorite thing about the whole show.”

“It's hilarious to me that you can work for six years on a show…and it gets boiled down to three seconds. It's a perfect way-of-the-internet," he said adding, "I feel like everybody on this show cried more than I did and I was the one who got caught in the loop!"

The "Varsity Blues" star even recalled that the 2000 crying scene was totally unscripted.

"I remember being completely surprised by it because it was completely sincere," he told the Huffington Post (per MSN). "The fact that it's being used to mock me now, I think it's so funny."

The internet works in mysterious ways, James, but we’re glad the moment was immortalized on the Internet forever so we can use it to share a wide range of emotions via social media platforms and texts.