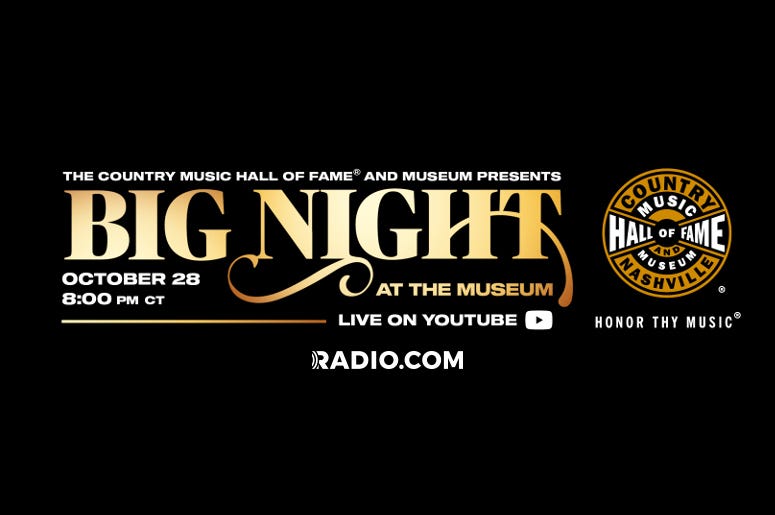 The Country Music Hall of Fame and Museum presents the world premiere of their free to all, ‘BIG NIGHT (At the Museum)’ special livestream on Wednesday, October 28 at 9PM ET/6PM PT, live on the museum’s YouTube channel.

The night promises exclusive performances by some of the biggest names in Country, while placing many of the genre’s most treasured instruments into the hands of today’s stars.

Produced in partnership with YouTube, the fundraiser aims to instill inspiration and public support for the nonprofit institution which has suffered significant financial losses as a result of the global COVID-19 pandemic.

During the 'BIG NIGHT (At the Museum),' donations are encouraged via YouTube Giving and by texting ‘donate’ to (833) 977-2643. (Standard messaging rates may apply). All funds raised will support the museum’s Coronavirus Relief Fund, providing critically needed aid to sustain the world-class exhibits, as well as provide help in collection preservation, and educational programming.

Staged and filmed in the museum’s galleries and performance venues during its temporary closure, 'BIG NIGHT (At the Museum)' highlights Country music history and the passing of musical traditions from one generation to the next.

Here’s the evening's epic lineup, including the pairings with historic instruments and/or the legendary artists each performer will tribute:

The War and Treaty pays tribute to Ray Charles

Don't miss Country music's 'BIG NIGHT (At the Museum)' on Wednesday, October 28 at 9PM ET/6PM PT only on YouTube.