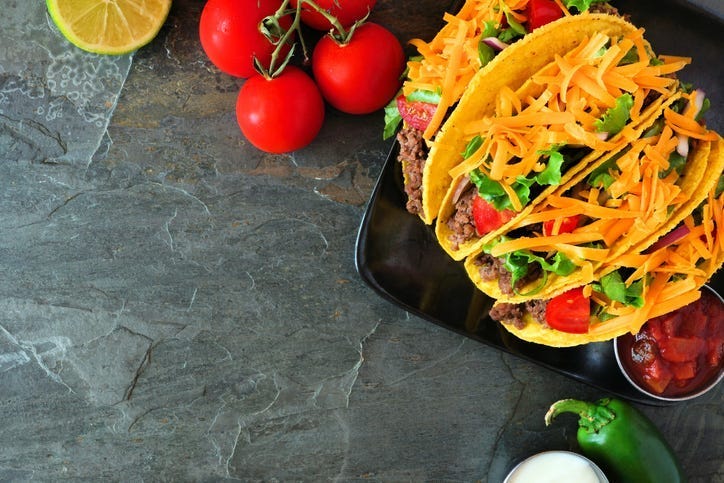 Tortillas may be the best thing since sliced bread. Their sales have increased by 5% to 9% every year since 1996, according to the latest data from the Tortilla Industry Association. Whether you use tortillas for classic dishes like tacos and enchiladas or go nontraditional and turn them into roll-up sandwiches or tortilla pizzas, you may have noticed that the packaged choices now go beyond corn or flour. Many tortilla varieties seem healthier, from low-carb to cauliflower-based to green-tinged spinach ones. And many people assume that tortillas are a healthier choice than bread. But are they? Well it depends. Let's start with the two tortilla titans of corn and flour. In a side-by-side nutrition competition between the two, corn tortillas come out ahead. Corn is a whole grain, while flour tortillas are usually made from refined white flour. For example, a 6-inch corn tortilla from popular brand Mission will run you around 50 calories, 10 grams carbs, 1.5 grams fiber, and 5 mg sodium. The company’s same size Fajita Flour Tortillas have 90 calories, 17 grams carbs, no fiber, and 260 mg sodium. However if you prefer a flour tortilla, opt for a whole grain variety. A number of brands have introduced “low-carb” tortillas. What’s tricky, though, is that many aren’t necessarily low-carb or low calorie. They are low in net carbs, which is the number reached when you subtract the amount of fiber from the total amount of carbohydrates and although it good on the packaging, net carbs isn’t a universally recognized concept. Healthier sounding vegetable-infused tortillas aren’t actually veggie-packed. her is where you need to pay attention to the ingredient label as it may contain a splash of spinach (in powder form), many rely on artificial colors such as Yellow #5 and Blue #1, which hardly sounds healthy. The newest entry are the cauliflower-based tortillas, which indeed contain actual cauliflower (first in the ingredient list), it doesn't necessarily mean they are lower in calories than a standard tortilla. Whichever tortilla you choose for tonight's taco festivities, read the label and look for basic ingredients.  The longer the list, the more likely it isn't as healthy as you'd like.