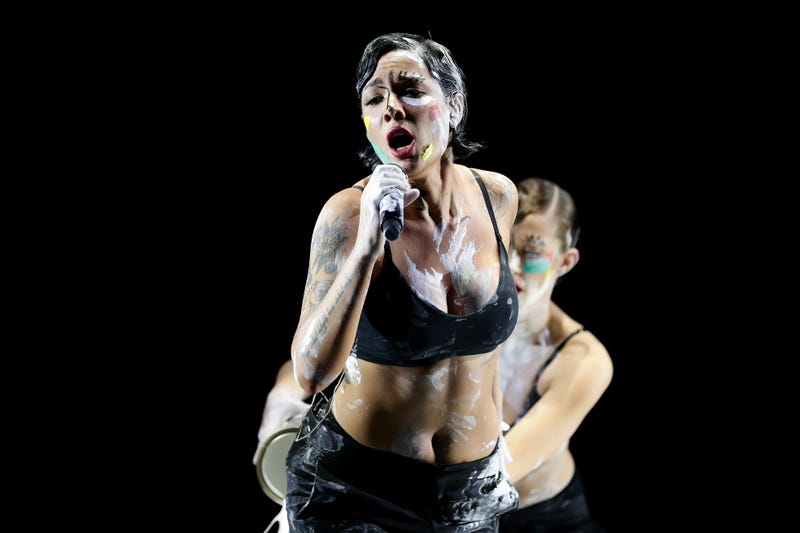 Surprised indeed and we are so excited! First Halsey launched a brand new beauty line and now the singer behind Manic is surprising us all with a baby bump.

The “Graveyard” singer took to Instagram to share three images of her and her developing baby bump. Halsey captioned the post “surprise!” alongside a bottle, rainbow, and baby emoji.

At the beginning of the month, the artist started the new year with the announcement of the launch of about-face­ beauty, a new makeup line that boasts Halsey’s sense of vivid flare and inclusivity.

Then it was revealed that Frangipane purchased Liam Payne’s Calabasas mansion that features seven-and-a-half bathrooms, a screening room, and a “meditation/massage pavilion,” potentially the perfect new nest for the mama to be.

In 2018 Halsey shared her story about having a miscarriage while on tour. The singer who was diagnosed with endometriosis in 2016 revealed, “I was on tour, and I found out I was pregnant,” during an appearance on The Doctors.

She continues, "before I could really figure out what that meant to me and what that meant for my future... the next thing I knew I was on stage miscarrying in the middle of my concert."

Endometriosis is a common disorder that an estimated 1 in 10 women in America face. The disorder can cause heavy and or painful periods, as well as issues with fertility and pregnancies. Halsey shared, “The thing with endometriosis is that it comes down to that doctors can tend to minimize the female experience when it comes to dealing with it.”

The New Jersey native explained, “the sensation of looking a couple hundred teenagers in the face while you're bleeding through your clothes and still having to do the show, and realizing in that moment... I never want to make that choice ever again of doing what I love or not being able to because of this disease. So I put my foot down and got really aggressive about seeking treatment and I had surgery about a year ago and I feel a lot better."

During the 2018 interview, Halsey also told us that she planned to freeze her eggs so that she’d be able to have a baby in the future. She said, "When I tell people that, they're like, 'You're 23, why do you need to do that? Why do you need to freeze your eggs?'” The artist then added, “Doing an ovarian reserve is important to me because I'm fortunate enough to have that as an option, but I need to be aggressive about protecting my fertility, about protecting myself."

Well now the “future” has become the present and the multi-talented global superstar is expecting her first child.

Not only are we excited by the news, but we are grateful for figures like Halsey who have opened up about their own experiences. Infertility, pregnancy, and women’s health is not talked about nearly enough. While sharing experiences of miscarrying or fertility issues is deeply personal we respect Halsey for taking us on this journey and opening the world’s eyes to the common shortfalls that surround understanding women’s health.

Congratulations to the expecting superstar!