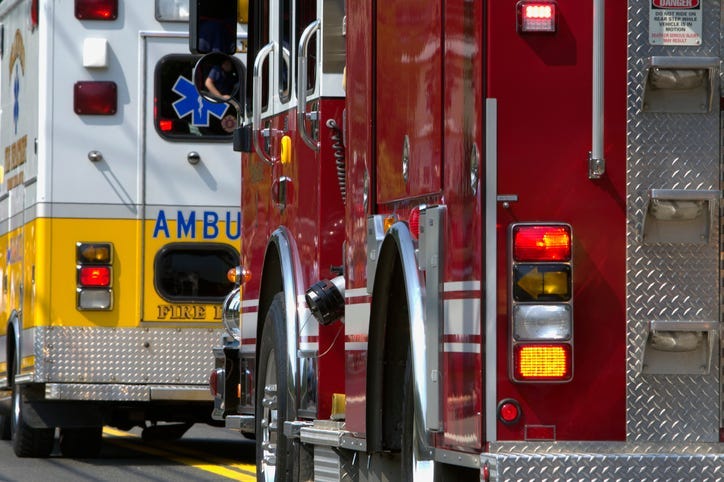 Las Vegas, NV (KXNT) - Two people were killed when the small plane they were in crashed and burst into flames near the Silverton Hotel on Thursday morning.

#Breaking small plane crash in the SW Valley. One woman tells me she looked outside and saw this plume of smoke @8NewsNow pic.twitter.com/FtEVAggNxC

A plane has crashed into a residential area in southwest Las Vegas - very few details released so far. Follow at https://t.co/HfSlAaQrLh pic.twitter.com/4VH9kj0d5p

According to the Clark County Fire Department, at approximately 9:40am, CCFD responded to a report of a plane crash near Raven Ave and Hinson St.

BREAKING# Small plane crashes in south Las Vegas, Viewer Treyy Johnson sent us this video moments after crash happened. #8NN is live on the scene. This is a developing story, to watch live click on link below. https://t.co/xwVx3YSlBl pic.twitter.com/S2pQdkLBJu

.@ClarkCountyFD reports the plane was in the air for 9 minutes before it crashed after leaving North Las Vegas airport. Witnesses said the plane was flying low before the crash. #8NN

Reports from first arriving law enforcement personnel were that the plane did catch fire and later exploded, and that no one was seen exiting the plane.

Here’s the path of the Cessna 310 plane that crashed in Las Vegas today, killing 2 on board. It took off from NLV Airport and crashed 18 miles into its flight destined for San Diego. Graphic via: Flight Aware. More here: https://t.co/0QFjcNP6Fy#vegas #planecrash pic.twitter.com/DDOmCJJp3e

The plane was a twin-engine 1974 Cessna 310R that took off from North Las Vegas Airport at 929 AM with 2 people on board.  The aircraft was airborne for 9 minutes prior to the accident.  The plane fire did extend to a nearby trailer.  CCFD mounted a fast attack on the aircraft and exposed building, which appeared to be a construction trailer.  The fire was knocked down at 1009 AM.

There were no injuries to report or occupants inside the trailer.

The FAA is on scene and will be conducting the investigation.

sports
Red Sox's Adam Ottavino on facing Ted Williams: 'I feel like I would do just fine'
sports
Clashing uniforms in Hawks/Thunder prompts rare, mid-game jersey change
music
The 10 biggest box office hits of the 1980s
music
‘Law & Order: SVU’ cast, ranked by net worth
music
Lady Gaga's stolen dogs have been returned unharmed
1thing
1Thing: What does it mean to be eco-friendly?