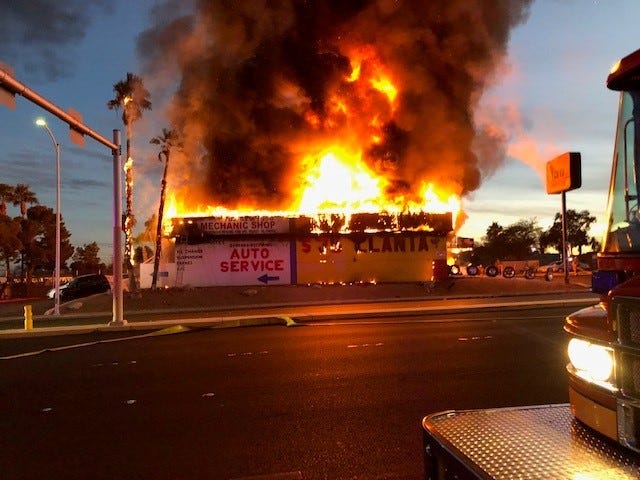 Las Vegas, NV (KXNT) - A tire shop near the Meadows Mall is a total loss following a fire Wednesday afternoon.

Fire dispatchers received several 9-1-1 calls that a building was on fire near the intersection of Meadows Lane and South Decatur Boulevard at just before 5pm. When firefighters arrived on scene, a large one story masonry auto repair shop, Econo Lube N Tube, 4701 Meadows Lane, was fully involved with fire. There were also reports that people were trapped inside the burning building. A second alarm of fire equipment was requested along with a strike team of ambulances to transport possible victims to the hospital.

Within 30 minutes the bulk of the fire was extinguished and firefighters started to look for hot spots. Two people complained of minor injuries which were treated on scene and they were released.

After the fire was out it was determined that the building was a total loss and approximately 16 vehicles were either damaged or destroyed by the fire. All contents inside the building was destroyed. Damage was estimated at $1 million.

Fire investigators determined that auto mechanics were removing a fuel tank from a vehicle. In the process the tank caught fire, possibly due to dropping the tank. The workers used several fire extinguishers in an effort to put the fire out, but it was too intense. Within minutes the entire interior of the shop was on fire.

The fire brought 30 pieces of fire equipment to the scene with over 75 fire personnel. Numerous other emergency vehicles from law enforcement and emergency medical services responded to the incident which closed down Meadows Lane and Decatur Boulevard for over an hour.

Smoke from the intense fire could be seen from any location in the Las Vegas Valley. Although tires were involved, a large amount of flammable liquids including gasoline contributed to the intense fire.