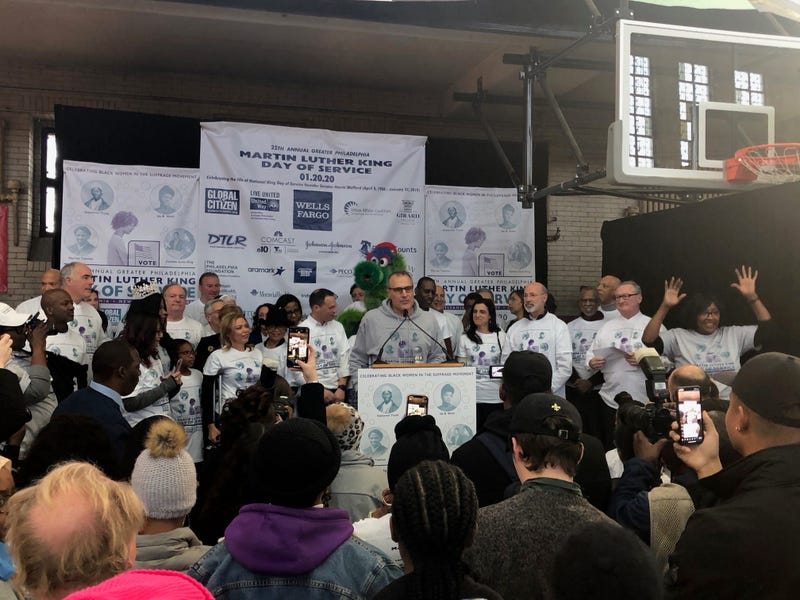 January 20, 2020 01/20/2020 6:54 pm
PHILADELPHIA (KYW Newsradio) — An estimated 150,000 volunteers dispersed across the greater Philadelphia region on Monday for the 25th annual Martin Luther King Day of Service. And as the 2020 election approaches, leaders took the time to emphasize the importance and history of voting in the U.S.

About 5,000 people kicked off the nation’s largest organized MLK Day, headquartered at Girard College. This year’s theme highlighted being counted.

“It is a very important election year, and our voter participation could never be more important,” said Todd Bernstein, the day’s lead organizer.

He said this day of service is focused on raising awareness about Pennsylvania's new voting laws, the 2020 U.S. Census, and the 100th anniversary of the 19th Amendment, with a particular emphasis on black women's participation in the movement. Black women and men were not guaranteed voting rights until 1965, even though black women were crucial to the women’s suffrage movement.

“Sojourner Truth and Harriet Tubman and Ida B. Wells who fought for women's suffrage were not given that right to vote,” Bernstein added.

At #MLKDayofService @GirardCollege - for 25th annual day of service. People are gathering- kick off to take place shortly. This year focus is being counted- voting and the Census. Thousands will be in here in next couple of hours. @KYWNewsradio pic.twitter.com/vTUKjml5yB

That notion continued to reverberate many decades into Girard College’s own history.

“We didn't even think about girls coming to Girard College because it was a male school,” said Karen Asper Jordan, a freedom fighter who helped desegregate Girard. Girls weren't allowed to enroll until the ‘80s. The first woman didn't graduate until 1993.

“We knew we weren't going to participate in it — at least we didn't think we were — but we were doing it for the folks who came behind us,” she said.

Pennsylvania Gov. Tom Wolf, Mayor Jim Kenney and others were on-site for the signature project: Volunteers built wooden ballot boxes to be used by census workers as a way to rally participation.

How are they doing?? -- Area elected officials spent part of the morning building wooden ballot boxes that will be used to collected pledge cards- designed to encourage participation in #census2020 more on @KYWNewsradio #MLKDayofService #MLKDay #GetCounted #Voting #Elections pic.twitter.com/N317bcPMzA

Looking around, volunteer Dwayne Hershberger said he could already see the impact.

“To see people working together on a day like this is extremely powerful for me,” he said.