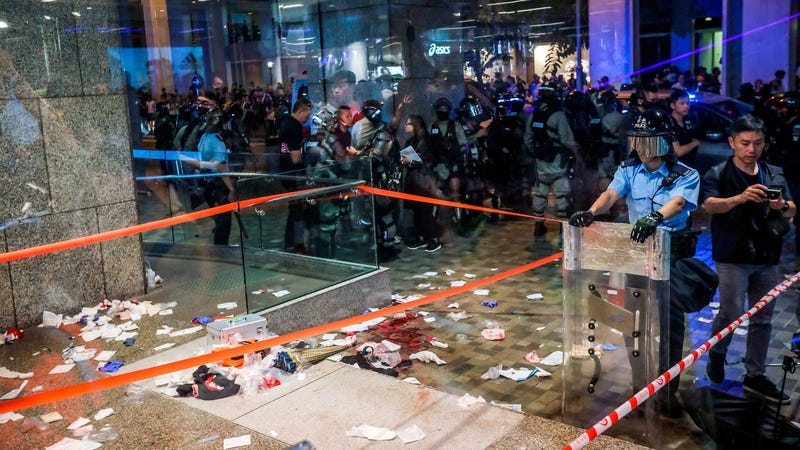 November 3, 2019 11/03/2019 6:48 pm
By Sandi Sidhu, Eric Cheung and Sheena McKenzie, CNN
(CNN) — Four people were injured during a knife attack outside a Hong Kong mall on Sunday, including a local politician whose ear was reported to have been partially bitten off.

The attack happened outside the Cityplaza mall in Tai Koo, where pro-democracy protests took place earlier in the day.

Four men, including the alleged attacker, and one woman are now being treated at the city's Pamela Youde Nethersole Eastern Hospital, a police source told CNN. Two of these are in a critical condition.

Among the injured was a pro-democracy politician whose ear was partially bitten off by the unidentified attacker, according to public broadcaster RTHK and the AFP news agency.

Wong, whose tweet included graphic photos of Chiu clutching the bloodied side of his face, condemned "these violent attacks especially targeting election candidates."

Hong Kong is due to go to the polls later this month. A number of pro-democracy candidates for the district council have previously been attacked.

The most notable case is that of Jimmy Sham, the Civil Human Rights Front convenor who helped organize large marches in early June.

Hong Kong Police confirmed in a statement Sunday that protesters gathered at Cityplaza "vandalized a restaurant in the mall" but they have not officially released details on the knife attack.

Hong Kong's protests began in March, but they kicked off in earnest in June. They were sparked by widespread opposition to a now-shelved extradition bill that would have allowed extradition to China, but have since expanded to demands for full democracy and police accountability.

In September, Hong Kong leader Carrie Lam announced the withdrawal of the extradition bill after months of large-scale protests, which have roiled the city and damaged its economy, but the move has not stopped demonstrations.