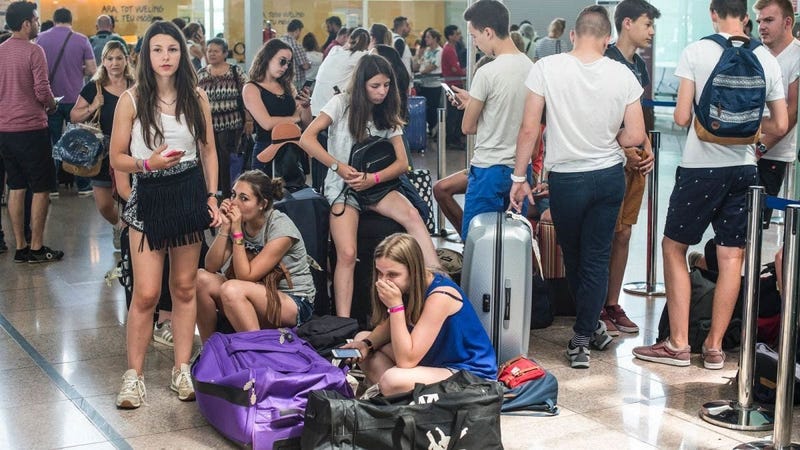 Such a scenario could turn the travel plans of millions of people into a misery of delays, cancellations and bureaucratic nightmares.

Travelers seeking to head in or out of the U.K. face so many uncertainties that it's almost impossible to plan effectively to avoid them.

Downing Street has confirmed that Freedom of Movement rules for EU citizens will change "immediately," with tougher criminality checks among the amendments. Further details on the changes are to be set out in due course.

Given there's no replacement system in place as yet, the prospect of new border restrictions coming into effect on day one of an almost certain no-deal Brexit have done little to quash fears.

Perhaps it'll be business as usual. Perhaps travelers will spend hours, days even, trapped in snarl-ups at English Channel ports or airport lounges.

Disrupted vacations might seem trifling weighed against the huge trade deals at stake in the Brexit negotiations, but tourism across both sides of the U.K. border is worth billions of dollars and annual getaways are vital to the well-being of millions of key workers.

The U.K.'s parliament voted on Jan. 15 to reject a Brexit deal thrashed out by former Prime Minister Theresa May. So far, her replacement Boris Johnson, who took over in July, hasn't renegotiated a deal.

However, he has affirmed that the U.K. will leave the European Union "come what may" on the agreed date

With no solution in sight, it seems almost inevitable that the U.K. will exit without a deal.

So much of modern British life — from airport management to cheese production — is tangled up in European legislation that the sudden severing of ties, now scheduled for Oct. 31 after EU leaders agreed a six-month extension, will have huge implications.

Those traveling to and from the U.K. can expect significant disruption, according to travel industry experts. Particularly if the new restrictions are implemented immediately. Aviation, currency, insurance, mobile phone roaming and passport control are all likely to be affected.

"Preparing for no deal is now an operational priority for the U.K. government. So we have to entertain that nightmare," says Tom Jenkins, chief executive of ETOA, the European Tourism Association.

Jenkins says that a no-deal scenario could cause growing queues at passport control, with the European Union intending to treat U.K. passengers as those from a "third country" rather than those enjoying full EU rights under freedom of movement.

"This adds 90 seconds of border checks on each passenger," says Jenkins. "This is hours of delays disembarking any flight, and days of delays at Channel ports. It will be a spectacular introduction to the red tape of Brexit." Queues are likely to grow at U.K. and EU airports," he added.

Not everyone forecasts doom and gloom.

"Tourism is big business in the U.K., just as it is in Europe, and huge quantities of money are spent from both sides each year by visitors from all over the world," says Matt Dunne, operations manager at tour company Healing Holidays. "Therefore, the U.K. government and the EU will be keen to ensure this continues."

What will happen to air travel?

While some, including Dunne, say airfares could rise in the event of no-deal, air travel itself is expected to continue between the U.K. and EU even if an agreement isn't struck. The European Union issued guidance in December 2018 saying it intended to allow flights from the U.K. into its airspace.

However, it was quick to clarify that this would only extend to "basic connectivity." Britain's exodus from the the EU's Single European Sky initiative could have knock-on implications for air traffic management, significantly affecting airport runway capacities.

In an attempt to preempt post-Brexit confusion, budget airline Ryanair, one of Europe's largest carriers, is among several that have set up U.K.-based subsidiaries to get separate U.K. certification needed if Britain crashes out. Meanwhile, the U.K.'s EasyJet has had to set up a European base.

The U.K. government has said it is studying the EU's proposals, but that consumers could still book flights after Oct. 31 in the event of no deal, "...with confidence."

"Both the EU and U.K. have made it very clear that both parties want to ensure flights between the U.K. and EU continue in any scenario," says Reigo Eljas, lastminute.com's country director of the U.K. and Ireland. "The importance to retain the aviation links, which bring significant economic and cultural benefits, is clearly understood by both sides."

Will passports still be valid?

And what about passports? Will British citizens, whose burgundy passports are currently emblazoned with the words "European Union," still have valid travel documents after Oct. 31?

Assurances have been made by the EU's legislative body that visas will not be required, at least initially.

"The European Commission announced in November 2018 that, even in a no-deal scenario, U.K. travelers can still visit the EU without a visa, providing the same is offered to European citizens visiting the U.K.," says ABTA, the Association of British Travel Agents.

However, the Commission has also confirmed that as of 2021, U.K. visitors to the EU will have to pay €7 (about $8) for the European Travel Information and Authorization Scheme (ETIAS), which can be bought online ahead of travel. This will last three years and ensure smooth entry at EU borders and airports, similar to the current ESTA scheme many tourists use to travel to the United States.

The U.K. government is also advising citizens to ensure they have at least six months' validity left on their passport when entering the EU, up from the current 90-day limit. EU travelers heading to the U.K. are unlikely to face visa restrictions, as long as the U.K. reciprocates the EU's offer.

However, the U.K. has yet to finalize its post-Brexit immigration strategy, adding further confusion.

What about insurance and medical emergencies?

U.K. travelers are also likely to face major changes when it comes to insuring themselves while traveling within the EU. Currently, travelers who need to use health services can show a European Health Insurance Card (EHIC) to access free medical care in any EU country. Yet ABTA sounds a worrying note, confirming that, "In the event of a no-deal Brexit, U.K. registered EHICs will no longer be valid."

"British travelers need to check their travel insurance policies carefully to ensure that they provide sufficient cover," says Jo Mackay of Bookings For You, a holiday lettings firm specializing in France and Italy. "It is likely that insurance premiums could rise in the short term."

ABTA, meanwhile, is advising U.K. travelers to check existing policies to see if they have emergency cover, as this will be required to cover costs if medical attention is needed and the U.K. and EU have not secured an agreement.

Will driving licenses be affected?

Those driving to the EU from the U.K. via the Channel Tunnel and major ports in southeast England will benefit from the fact that train and ferry travel are protected by EU rail regulations and international maritime law respectively.

However, drivers may need to get a special license in order to be fully compliant when on the EU's roads. In official guidance released in September 2018, the U.K. government said, "If there is no deal with the EU, you may need to obtain an International Driving Permit (IDP) to drive in the EU."

What about mobile phones?

Similarly, concerns have also been raised about the cost of using mobile phones in the EU when traveling. EU-wide agreements which came into place in 2017 saw punitive roaming charges banned, but consumers are being advised that a no-deal Brexit could mean EU mobile networks charging U.K. travelers to access data, make calls and send text messages, with the U.K. being seen as a "third country" in this case.

"Whilst the major U.K. providers have made clear statements that they currently have no plans to raise charges on roaming services post-Brexit, the loss of this EU regulation could leave consumers without a safety net when it comes to the cost of data whilst abroad in the future," says Ernest Doku, mobiles expert at U.K. consumer site Uswitch.com.

The cost of travel for U.K. citizens is also likely to increase, although it could be beneficial to those traveling into the country as exchange rates are affected.

"With a no-deal we expect sterling to further weaken and make the U.K. an even more attractive place to visit," says Rob Russell, joint CEO of AC Group, a U.K.-based tour operator. "Two of our biggest U.S. clients have already seen an increase in sales for 2019."

That said, the Britain that awaits them could be a vastly different place from that depicted in the holiday brochures if apocalyptic warnings about food, medicine and other shortages come to pass, not to mention the possibility of civil unrest.

"No-deal could have a huge impact on tour operators," he says. "It is that knock-on effect that is potentially very damaging; it will put people off booking short weekend breaks, or making confirmed bookings. It might seem inconsequential to most people, but for tour operators it's their bread and butter."

Despite both sides initiating no-deal planning in a bid to ameliorate the worst effects of such a scenario, there remains a heightened sense of uncertainty within the travel industry. That in turn has left consumers unclear as to how the world will look if a deal isn't signed off before the Oct. 31 deadline.

All eyes will be on the U.K.'s parliament over the coming weeks, with travel experts hopeful that some kind of compromise can be reached.