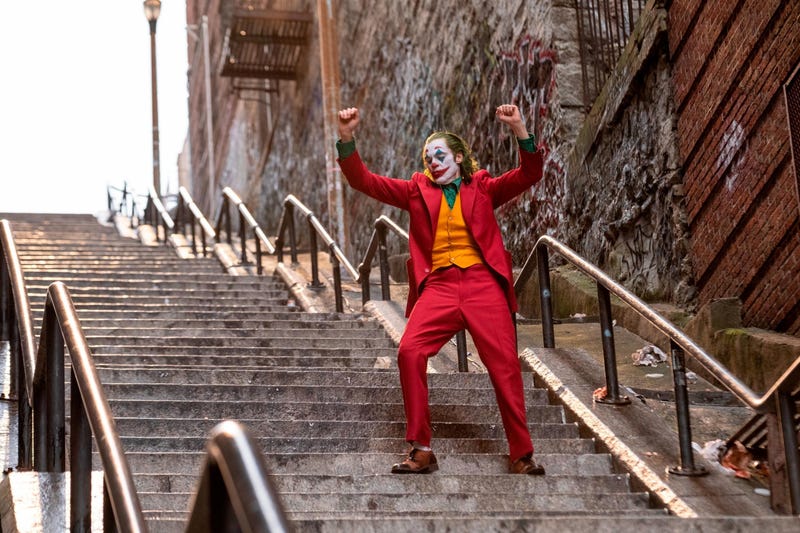 October 4, 2019 10/04/2019 2:59 pm
By Faith Karimi, CNN
(CNN) -- The "Joker" hit movie theaters this week despite a wave of criticism that it glorifies a killer and could encourage copycat attacks nationwide.

The movie featuring Joaquin Phoenix is about a marginalized clown that goes on a killing rampage. The story's told in a manner that seeks to evoke empathy without rooting for him, says CNN's Brian Lowry.

It takes place in 1981 and tells the backstory of Arthur Fleck, a failed stand-up comedian who finds salvation by turning to murder in Gotham City. Even before its release, Warner Bros. faced protests from the families of mass shooting victims who feared it would lead to violence or copycat attacks.

Heightened concern about the movie's premiere grew because of the 2012 mass shooting at an Aurora, Colorado, movie theater on the opening night of "The Dark Knight Rises" -- another Batman movie. That attack left 12 people dead and dozens wounded at a midnight showing.

In a joint bulletin, the FBI and the Department of Homeland Security warned law enforcement after online threats called for mass shootings at movie showings. The bulletin shared with police this week said while federal authorities had no information leading to specific or credible threats to particular venues, they had received tips of threats posted on social media since at least May.

In response, major cities beefed up security for the movie's opening night. The Los Angeles Police Department said it'd maintain a high presence at theaters and urged moviegoers to be vigilant and report anything unusual. Some theaters even banned costumes at the "Joker" premiere.

"While there are no credible threats in the Los Angeles area, we do encourage the public to know that the police department will be out there in high visibility," police spokesman Jader Chaves told CNN's Lucy Kafanov.

On Thursday, the Huntington Beach Police Department became aware of "credible" threats made to a theater in the city outside Los Angeles, Lt. Ryan Reilly said.

Officers were deployed to the Cinemark Century Theatres and remained there until Thursday evening, when theater management decided to close, Reilly said.

Police are monitoring the situation and normal operations were expected to resume Friday, according to Reilly. Police have not confirmed that the threats were related to "Joker," which is playing at the theater.

The New York Fire Department's Counterterrorism Task Force sent out an internal memo prepping field units for the release in an abundance of caution, according to FDNY spokesman Jim Long.

Long said the FDNY is monitoring potential developments and sharing information with field units to ensure the safety of moviegoers.

Some moviegoers are unbothered

Matthew Clarke attended the opening night Thursday, and said he was not concerned about the security warnings.

"When I first heard about the mass shooting controversy, it didn't really bother me. To me, it was just another stupid thing that was going on," he told CNN's Jason Kravarik.

"I remember at least a decade (ago), the same thing happened when 'The Dark Knight' came out. It didn't really bother me, and nothing's going to stop me from seeing the Joker."

Clarke defended the movie, saying it's not glorifying killers because it's fictional. "It's just a movie about a character that's going through a transformation. To me, it just feels like, I don't know how to put it into words, it's just not a big deal," he said.

Phoenix defended the movie amid the controversy.

His portrayal of the character is meant to provoke, he said. "I think it's really good ... when movies make us uncomfortable or challenge us or make us think differently," he added.

"Joker" is being released by Warner Bros., which is a unit of WarnerMedia, as is CNN. In a statement, WarnerMedia said the movie does not aim to "hold this character up as a hero."