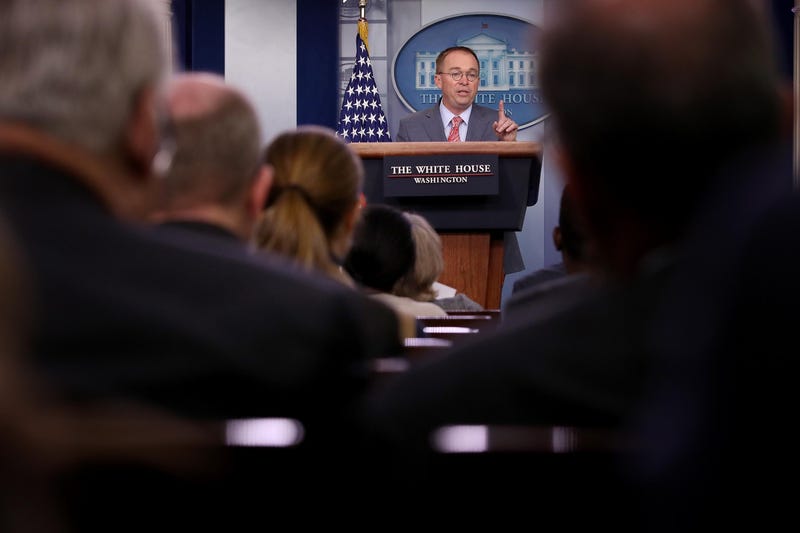 By Jim Acosta and Jeremy Diamond, CNN
(CNN) -- President Donald Trump is not pleased with acting chief of staff Mick Mulvaney's press briefing and his acknowledgment on Thursday of a quid pro quo, according to a source close to the President.

"He was not happy," the source said.

Mulvaney shocked reporters when he admitted the Trump administration had held up military funding to Ukraine to press the country to investigate the handling of a Democratic National Committee server hacked in the 2016 election. When told that he had described a quid pro quo arrangement for the military funding, Mulvaney said, "We do that all the time with foreign policy" and later added, "Get over it. There's going to be political influence in foreign policy."

The admission ran contrary to the President's statements -- echoed by his supporters in Congress and the media -- that there was no quid pro quo for the military funding, which had been delayed before ultimately being sent to the Ukrainians. Mulvaney's statement came after current and former Trump administration officials revealed in congressional testimony that a White House meeting between Trump and Ukrainian President Volodymyr Zelensky was also being conditioned on Ukraine launching politically charged investigations.

Mulvaney later denied that he had admitted to the quid pro quo in a written statement. "The only reasons we were holding the money was because of concern about lack of support from other nations and concerns over corruption," he said, adding, "There never was any condition on the flow of the aid related to the matter of the DNC server."

A White House official blamed much of Trump's anger on the press, saying the President believes the media "intentionally misinterpreted" Mulvaney's comments.

White House lawyers and press staff had prepped Mulvaney before his press briefing, which Trump knew and approved of, according to two White House officials, but the focus of the prep session was on questions Mulvaney would face about the selection of Trump National Doral in Florida as the site for the 2020 G7 meeting -- not impeachment.

White House aides spent only a short time prepping Mulvaney on impeachment questions and did not expect he would go as far as he did in describing the freeze of aid to Ukraine.

Trump approved of Mulvaney briefing reporters on the Doral site selection and understood that Mulvaney would also take questions on Ukraine.

No sooner had the briefing ended than attorneys -- both in the White House counsel's office and on the President's legal team -- privately expressed concerns about Mulvaney's performance. A source familiar with discussions by Trump's legal team said the President's personal attorneys were baffled by Mulvaney's performance and Trump attorney Jay Sekulow said Trump's legal team "was not involved in the Acting Chief of Staff's press briefing."

Those concerns led to the White House's release of the statement from Mulvaney backtracking on his confirmation of a quid pro quo involving security aid to Ukraine.