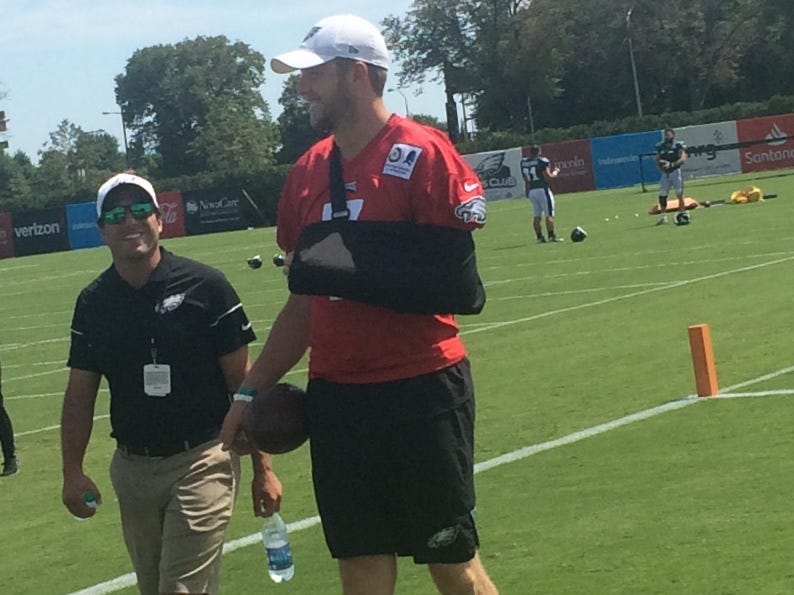 The injury will keep him out for the remainder of the preseason as well as the beginning of the regular season. While Sudfeld is disappointed about the situation, he understands a different type of injury could have set up a far worse scenario.

"I'm really excited that it's not a long-term injury," said Sudfeld. "Thank God it's not my right hand because you never know what complications could come with using it and throwing every play. If I could pick an injury, it would probably be my left wrist or something like that, so I'm really thankful for that and really trying to see the silver lining," he continued.

The Eagles would not give a specific time frame for Sudfeld's recovery, but reports say Sudfeld could return in about six weeks. There is no indication at this point that the team will bring in another quarterback.  With Sudfeld sidelined, fellow backups Cody Kessler and Clayton Thorson will get more work. Coach Doug Pederson hopes the other quarterbacks will take advantage of the extra snaps over the next few weeks.

Pederson on if Cody Kessler has to be the backup: “He’s been in that role before.”#Eagles pic.twitter.com/7GHalqwB4L

"I thought he did some great things," Pederson said. "He showed great poise, made some great throws. There were a few things that we saw on film that we will be able to coach him up this afternoon when we watch the tape with the players. It is unfortunate that he got injured...going to miss the rest of training camp, obviously, but this is a great opportunity for both Cody and Clayton to really embrace now the opportunity they have in front of them."

Sudfeld was expected to take over Nick Foles' role as Carson Wentz's primary backup during the season. With Foles now in Jacksonville and Sudfeld spending the last two years learning behind Wentz and Foles in the number three spot, the timing seemed to be right for Sudfeld in 2019. However, Pederson indicated this latest injury shouldn't change Sudfeld's spot on the depth chart.

"You'd like to get another game or two to see him in a little more action," said Pederson. "But what he's proven to us in practice the last couple of years, what he's done out here, what he did in the game the other night, again he was smart with the football, made great decisions, threw the ball with accuracy. Those are all things you look for in the backup."

While Thorson is a rookie and still learning on the fly, Kessler has experience as an NFL backup. The Eagles will likely rely on Kessler in the early part of the season if something happens to Wentz.  Meanwhile, Sudfeld will be forced to play the waiting game as he recovers from his injury.

"It's definitely disappointing," Sudfeld said. "I felt like I was getting in a rhythm and felt like I was doing a lot of things I wanted to do. I felt like as a team we were getting better and on offense, we were putting some plays together. You play football to play in those games. That is disappointing but again, all things considered, I'm really fortunate and blessed it was only a left wrist. The surgery is done already. I'm fixed, but I'm not healed yet."