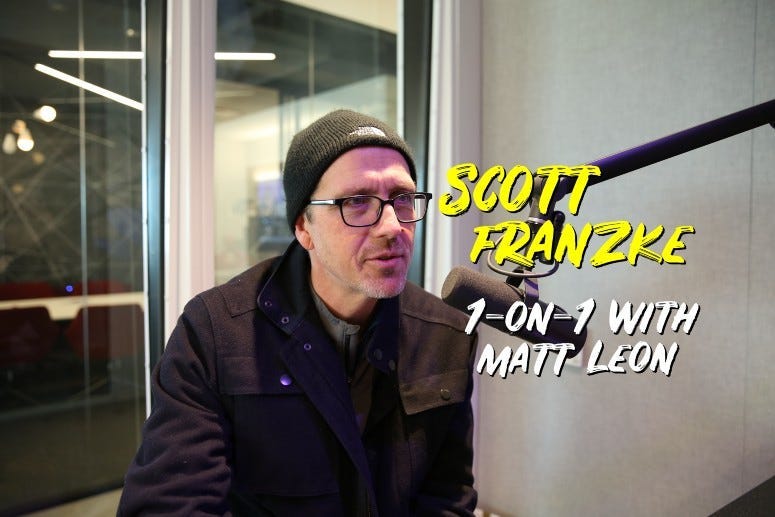 Franzke, who has been in Philadelphia since 2006, hails from Texas and worked with the Rangers prior to joining the Phillies booth.

He remembers his early days in Philadelphia when, in his first week on the job, he received a voicemail from Sixers TV play-by-play man Marc Zumoff.

"I didn't know Marc, I had never met him and in fact, it would be a while before I did.But he left me a voicemail and said, 'Welcome to town. You'll find that Philadelphia's the biggest small town you're ever going to live in.' I saw that right away. You meet people and they know people and they know people and everybody seemed to kind of know each other. Which is pretty remarkable for a city this big, but you just kept finding those connections, 'Oh, I know so-and-so that worked there' and whatever. So there's a little hometown feeling for you. InstantIy, I mean people were just really nice," he said.

Of course, in Franzke's first few years with the Phillies, he got to work alongside a Philadelphia legend in the late Harry Kalas.

"It was my very first inning on the air in spring training, we were in Kissimmee. I was off the air for the first three innings and then I would jump on in the fourth, do color for Harry and then do a couple of innings of play-by-play," he said of his first on air experience with Harry the K.

"Not sure exactly how it was spaced out, but he was doing play-by-play when I went on the air with him. Ryan Howard hit a home run, down the left field line, in Kissimmee, and Harry did the, 'That ball's outta here' and he did the whole thing. And I mean, the hairs on the back of my neck just stood up. I just kind of had to pinch myself there, I'm like, 'Gosh, I'm sitting here with Harry Kalas. How did this happen? How did I get here?'"

You can listen to the entire interview with Scott Franzke by checking out the latest episode of the KYW Newsradio original podcast 1-on-1 with Matt Leon. Subscribe wherever you get your podcasts.
You can follow him on Twitter @Mattleon1060.