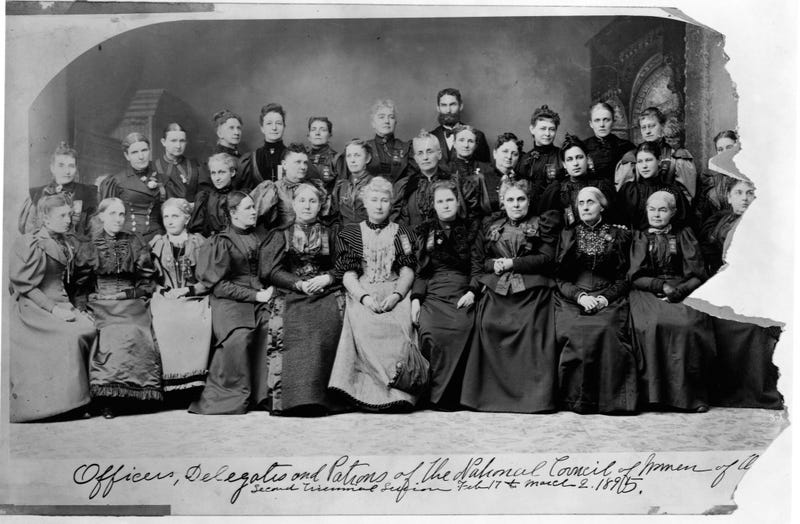 August 4, 2020 08/04/2020 9:00 am
PHILADELPHIA (KYW Newsradio) — When the Founding Fathers drafted the Declaration of Independence, they did not address the rights of women. The U.S. Constitution didn’t mention them either.

The nation’s founding women were not provided the same rights as men. For many decades that followed, women could not, for the most part, vote, own property, enter into contracts, divorce, or gain custody of children. A married woman was not viewed as a person under the law.

“What they speak of often in the women’s movement is that men and women had different spheres,” said journalist Angela Dodson, who penned the book “Remember the Ladies: Celebrating Those Who Fought for Freedom at the Ballot Box.” “Politics and the outside world was the men’s sphere, and children and the home were women’s sphere.”

It’s been 100 years since women won the right to vote, but the suffrage movement dates back long before its success, burgeoning as an offspring of the abolitionist movement.

It was taboo for women to speak publicly back then, according to Dodson, especially in front of mixed audiences of men and women. But abolitionist women — both Black and white — broke the mold.

“The first woman to do so was Maria Miller Stewart, a free Black woman who lived in Boston,” she said, “but her speaking career only lasted a few years because there was so much resistance to her speaking.”

That was in 1832. In 1833, when women were prohibited from joining the American Anti-Slavery Society, they formed the Philadelphia Female Anti-Slavery Society, an interracial group that petitioned to end slavery and boycotted goods produced by the enslaved, such as cotton and sugar. But as abolitionist women primarily from the North, they were still dependent on men.

“Even when they have the first Female Anti-Slavery Society meeting, they had a man preside,” Dodson said, “because women were not accustomed to presiding over meetings.”

Still, abolition gave women the opportunity they needed to learn how to lead. As a result, abolitionists of both sexes later took up the causes of women — like Lucretia Mott, a Quaker preacher from Philadelphia, Mary McClintock, and Martha Coffin Wright.

Frederick Douglass, the renowned Black abolitionist, author and diplomat, also joined the suffrage movement and stood beside Quaker Jane Hunt, Elizabeth Cady Stanton, and others who organized the Seneca Falls Convention in 1848.

“But women didn’t plan to seek the vote at that meeting,” Dodson noted.

Instead, women turned their attention to other rights that would open the door to greater dignity and upward mobility in society. A resolution for the women’s right to vote narrowly passed — only after Douglass made a passioned argument during the convention.

“Women initially thought they’d have to go state by state, which could take forever, especially in the South,” said Dodson, “but they realized if they would give the vote to Black men via a federal amendment, that meant they could give it to us, too.”

During the Reconstruction era, Black and white women continued to work together for their common cause. However, their efforts were swiftly interrupted. As southern states enacted strict Jim Crow segregation laws, white suffragists began to distance themselves from Black people and causes. Prominent members of the movement, like Stanton and Susan B. Anthony, wanted to court the Southern vote.

One of the biggest obstacles of the suffrage movement was not gender, but race.

“Some of the suffragists made the argument that giving the women the vote could only strengthen white supremacy,” Dodson said.

“The progress of suffrage shows that racism was always there,” added Anne Krulikowski, an associate professor of history at West Chester University.

She said leaders like Alice Paul — a New Jersey Quaker known for organizing radical acts of civil disobedience for the suffrage movement — wanted to separate Black women and race from the advancement of women’s voting rights.

“She was a very single-minded woman and didn’t want her agenda hampered because of other issues,” Krulikowski said.

White suffragists started to use those racist tactics to promote their campaign.

When Paul organized the 1913 Women’s Suffrage Procession in Washington, D.C. — a southern, racist city at the time — “she is convinced that if Black women march in the parade, no white women will march,” said Mary Walton, author of “A Woman’s Crusade: Alice Paul and the Battle for the Ballot.”

During the parade, Walton said Black women from the newly formed Delta Sigma Theta sorority at Howard University were told to march in the back of the procession. They complied, as did many other Black women. But when lynching activist and suffragette Ida B. Wells was told the same, she said “no way,” according to Walton.

Wells slipped away from the group and re-emerged with her white Chicago delegation, in defiance of Paul.

“That definitely tarnished her reputation,” said Walton, noting many called her actions racist, “and rightly so.”

“They disagreed and they kept working together,” she added.

And, they were successful: The 19th Amendment, women’s right to vote, was ultimately ratified on Aug. 18, 1920.

On Nov. 2, 1920, millions of women cast their ballots for the first time — including some Black women. It took another 45 years for the passage of the Voting Rights Act, when all men and women were guaranteed the right to vote.
This series, presented by the National Constitution Center, explores the 19th Amendment in the context of 100 years since its passing. Follow along throughout the month of August as KYW Newsradio shares little-known stories of Philadelphia’s push for equality, and the fight women are still battling today.