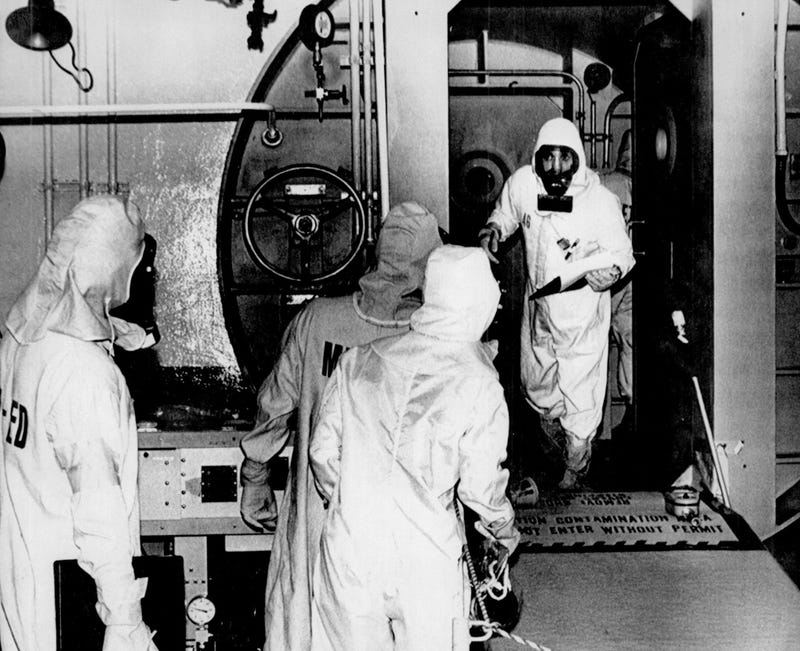 Part 3 of a five-part series. As we mark the 40th anniversary of the partial meltdown at Three Mile Island, KYW Newsradio is taking a look back at the near-catastrophe while also examining the future of nuclear power.

"Everything is under control," Herbein said. "There is and was no danger to public health and safety."

"We learned right off the bat that the company that owned the plant was not being forthright," he said, "which is another way of saying they were lying through their teeth."

Maloney credits Dick Thornburgh, who had been governor for less than three months in March 1979, for maintaining order.

In 1999, Thornburgh told KYW Newsradio that even he was frustrated by Met-Ed’s inability to tell the truth.

"Finally we discarded the utility as a source of information," he said.

The late KYW Newsradio Harrisburg Bureau Chief Sandy Starobin reported 40 years ago on the angst around the plant, as trucks drove through Middletown telling people they do not need to evacuate.

"Sound trucks are going through town," he reported. "The sound trucks are saying to people, 'Stay inside,' which is a directive from Gov. Thornburgh. They are asking the people to stay inside."

John Savoth was a sophomore at Dickinson College, in nearby Carlisle, Pa., at the time.

"The initial reaction was, 'Yeah, right. It’s not going to amount to anything,' " Savoth said, looking back at the unfolding saga 40 years ago. "And that indifference turned to fear. ... I remember really thinking strongly about 'How am I going to get out of here?' because I didn’t have a car."

"On the fourth night of the incident, it was reported that there was a hydrogen bubble in the reactor compartment, and that could explode," continued Maloney.

Starobin sent his wife and kids to stay with his family in New Jersey. Maloney says, after the hydrogen bubble press conference, they went to one of the only restaurants still open in Harrisburg.

"Sandy lowered his head and he said, 'We're all going to die,' " Maloney said. "And there was this absolute silence in this restaurant. And it was the one time we thought, 'Ya know, we're probably in the wrong place at the wrong time.' "

"It prompted a general near-panic," Thornburgh recalled in that interview 20 years ago.

While he did recommend pregnant women and children stay away from plant, Thornburgh told us they never got close to issuing a full evacuation.

But the damage was done. Nuclear energy, once considered a sort of miracle producer of boundless electricity, was now seen as a potential killer.

Over the course of this week, we'll have much more from Maloney and other KYW Newsradio reporters who were at Three Mile Island, along with a look at Gov. Dick Thornburgh and Harold Denton, and the future of nuclear energy.