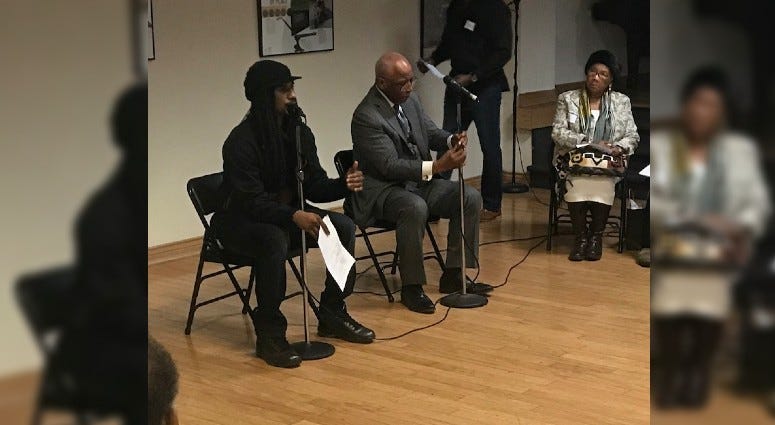 The call for an official apology from the city of Philadelphia came from former Mayor Dr. Wilson Goode in an op-ed published in the Guardian on Sunday.

He took responsibility, publicly apologizing for the fourth time for what happened on May 13, 1985.

“I think it’s important for the generation that is about to take over the movement to know that I am sorry, and the city is sorry,” said Goode in an exclusive broadcast interview on the subject.

That day, 35 years ago, still weighs heavily on Goode’s conscience.

After years of tension between Philadelphia officials, police and the MOVE organization — a black liberation, back to nature group founded by John Africa — Philadelphia city officials dropped a bomb on the MOVE compound in West Philadelphia, killing 11 members of the organization and destroying dozens of homes.

“It happened on my watch,” he said, “and I am hopeful that an apology would move us toward reconciliation and healing.”

Goode has been part of reconciliation meetings with Michael Africa Jr. of the MOVE organization for two years, hoping to make things right.

He even wrote support letters on behalf of the MOVE 9 to help them get paroled.

Today, all surviving members of the MOVE 9 are free more than 40 years in prison for third-degree murder of a Philadelphia police officer.

Despite the conviction, the members of MOVE 9 dispute the account of that day and maintain their innocence.

“An apology without action is useless,” said Africa Jr.

He said a citywide apology will do little to bring back the lives lost or to provide police to his family. Instead of an apology, Africa wants the city to help get MOVE member Mumia Abu-Jamal free.

But Africa notes that it could help the broader community, “to understand why this happened and to make sure it never happens again.”

The effort began in 2018 after tension flared over a street being renamed after Goode in Overbrook. The group drafted an apology resolution on behalf of the city, sending it to all members of City Council.

“It’s an act that has deeply traumatized the family as well as the West Philadelphia community,” she said. “An apology would be a way to provide accountability, but also to help rebuild trust.”

I fully support a Council apology on 35th anniversary of #MOVE bombing. As someone who intro'd apologies for racism Jackie Robinson faced in Philly & for police beatings of #PHLEd kids in 1967, I believe truth & reconciliation starts with saying sorry. https://t.co/dmrztrtEQ3

Mayor Jim Kenney told reporters on Monday that he had no plans to take part in any citywide apology, since Goode apologized on behalf of the city years ago.

“The real way to address the problems of the past is to make that neighborhood whole again,” Kenney said.

The Osage-Pine community has been rebuilt, with private contractors renovating and selling the homes that had been blown up and then shoddily rebuilt. Kenney said he hopes once construction picks up, that neighborhood will be restored.