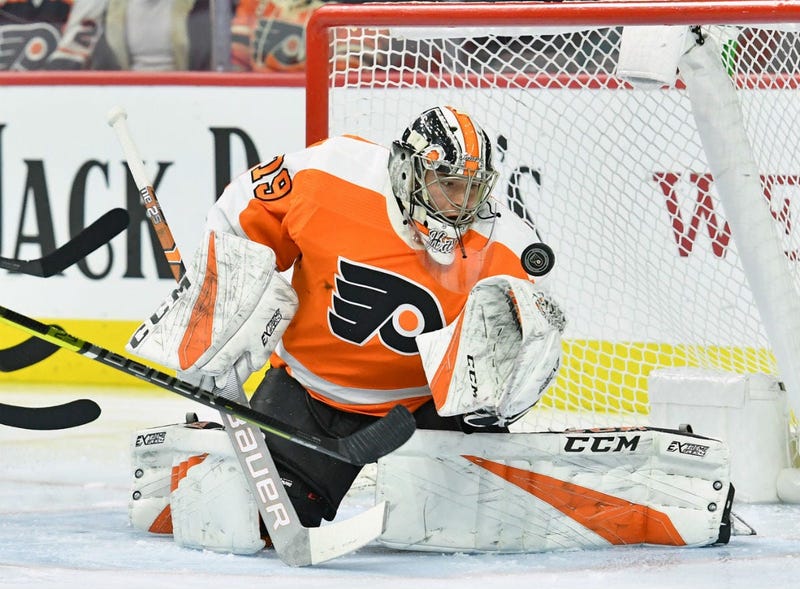 February 7, 2019 02/07/2019 3:13 pm
PHILADELPHIA (KYW Newsradio) — The Philadelphia Flyers aren’t a franchise known for a rich history of goalies. There are three who instantly pop to mind, and they’re Bernie Parent, the late Pelle Lindbergh and Ron Hextall. But Flyers fans are hoping the long drought since having a top-notch goalie ends with 20-year-old rookie Carter Hart, who's making his mark in Philadelphia right from the jump.

"It's a beautiful thing, because for a 20-year-old kid, he has what you call a God-given talent," Parent, who led the Flyers to their only two Stanley Cup Championships in the '70s, told KYW Newsradio. "You can't teach that. And what I mean by this is his anticipation is incredible."

Heading into Thursday night’s home game against the Kings, Hart is on a personal seven-game winning streak, which makes him only the fourth goalie in NHL history to do that before his 21st birthday.

"He will drop to his knees to make the save like most goaltenders do, but a difference with him is when the puck goes different directions, he goes up to his feet right away to make the move that he has to make and challenge the shooters, so he’s just an incredible individual,” Parent said.

When asked who Hart reminds him of, the affable Parent joked, "When he plays well, he reminds me of me."

But the truth is, Parent can’t think of any other goalie that resembles Hart.

"I don’t know if I could compare him to anybody. He is his own man, his own self. … In my book right now, he stands on his own right now."

Those are pretty strong words coming from a goalie with two shiny pieces of jewelry on his fingers — Stanley Cup rings.

And it’s not only Hart’s goaltending skills that impress Parent, but his personality as well. And everyone knows Parent has a strong personality of his own.

"He's very sociable, which is very, very important," Parent said. "Socializes well with the media, with the people, the fans and the whole bit. That is so powerful to do, because, let’s face it, you’re not going to have great games every game or you going to have a stretch where it could be difficult sometimes. But, if you love people, people love you…they won’t say when you have the tough game that you played real well, but they’ll be kind with their words, and this is such a great asset to have.”

Parent hasn’t had the chance to meet Hart yet, but when he does, he doesn't want to offer any advice about hockey, because he feels it may mess with the 20-year-old's thinking.

"I'll probably take some advice from him," Parent joked.

Parent plans on that first conversation being about life and the things both of them enjoy doing.

It's been over 40 years since Parent helped anchor back-to-back Stanley Cup Titles for the Flyers. The die-hards who have adored this team since those days have been waiting almost a half-century to enjoy that euphoria again. They’re hoping Hart is one of the guys that gets them there.

"We had great players on our team when we won the championship and nobody could’ve won the Stanley Cup by themselves," Parent, who’s currently an ambassador for the franchise, said. "You had to this as a team. And I see this coming now with this team. And in the near future, I really believe you’re going to have a championship team here."