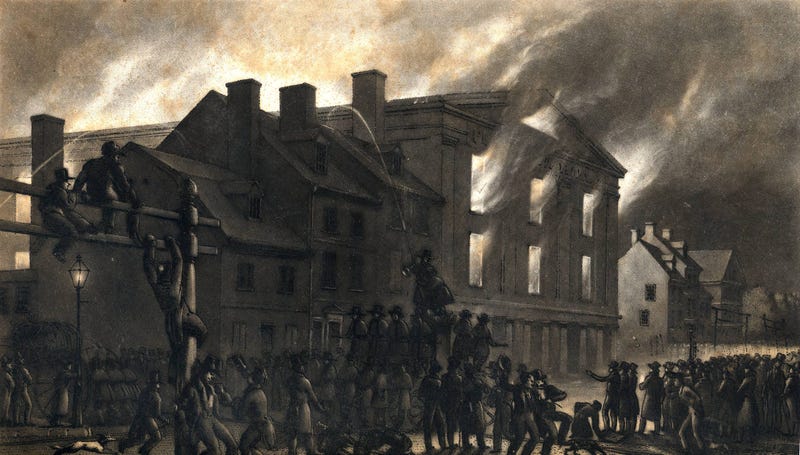 August 10, 2020 08/10/2020 9:00 am
PHILADELPHIA (KYW Newsradio) — The suffrage movement’s radical protests and impassioned demonstrations were not an unfamiliar concept. In fact, the movement was born from the efforts set forth by abolitionists, vehemently working to put an end to slavery in the U.S.

Both movements came to head in 1838 at Philadelphia’s Pennsylvania Hall — a site originally dubbed the “temple of free discussion.”

At the time, Philadelphia — just 20 miles from the Mason-Dixon line — was not a city of racial harmony. In a pre-Civil War era, the city was rampant with hostile anti-abolitionists, who also disapproved of women fighting for their right to vote.

Celia Caust-Ellenbogen, archivist at Swarthmore College’s Friends Historical Library, said the actions at Pennsylvania Hall were a turning point that revealed the glaring intolerance and ideological divide in the City of Brotherly Love.

“(Pennsylvania Hall) was erected, in part, because abolition speakers were targets of violence in the city, and they sometimes had difficulty finding venues where they could speak,” she said. “They erected Pennsylvania Hall to be a safe space for them to speak.”

Abolitionists raised money to build the haven in 1837. It was located on what is now North Sixth Street, about three blocks from where the nation was founded.

It served as the first structure in the United States built specifically for abolitionists, furnished with a great hall, lecture and committee rooms, a book store, and galleries.

Anti-abolitionists were up in arms over the symbolism of the building and the gathering itself. They said it was “promiscuous,” because both men and women were in attendance.

As the angry mob threw rocks at windows and ransacked the site, the women needed a way out.

After the women left Pennsylvania Hall safely, rioters set fire to the dwelling. Thousands of others stood outside, tacitly watching it happen.

Caust-Ellenbogen said firefighters showed up and sprayed water on surrounding buildings, intentionally leaving Pennsylvania Hall to burn unabated. If a fireman did try to alleviate the fire at Pennsylvania Hall, other firemen would turn a hose directly on that individual to make him stop.

By morning, Pennsylvania Hall was a pile of ashes. The conventioneers, however, were undeterred and held the rest of their meetings in a schoolroom on Cherry Street.

The brutal blaze and attack on free speech only added more fuel to suffragists and abolitionists’ own fire, as they laboriously continued their campaigns in the decades that followed.

This series, presented by the National Constitution Center, explores the 19th Amendment in the context of 100 years since its passing. Follow along throughout the month of August as KYW Newsradio shares little-known stories of Philadelphia’s push for equality, and the fight women are still battling today.
Photo courtesy of Friends Historical Library of Swarthmore College (item no. A0005355).