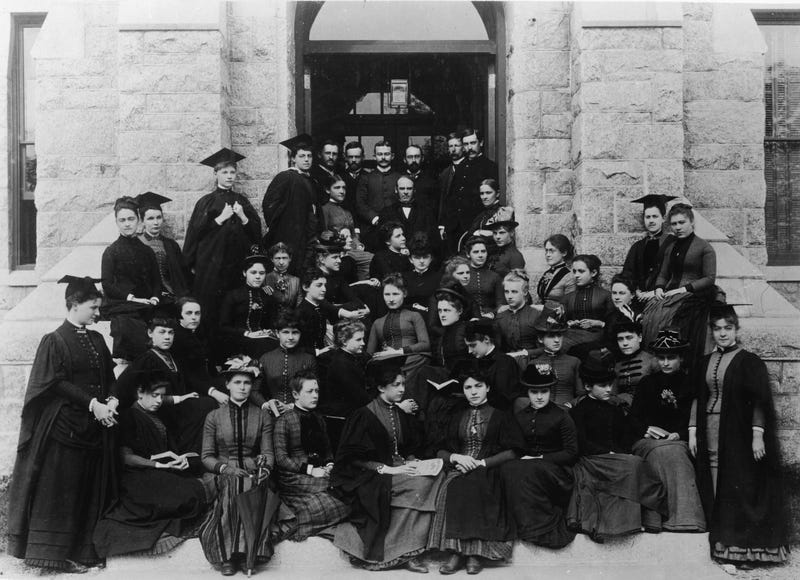 August 11, 2020 08/11/2020 9:30 am
PHILADELPHIA (KYW Newsradio) — The seeds of women’s suffrage were planted long before the first flower. Decades prior to the movement, the groundwork commenced at places still notorious for fledgling activism: college campuses.

“Like so many middle-class white women at that time, women at Bryn Mawr who eventually became involved in suffrage had already been quite active in abolition or temperance. But specifically, Bryn Mawr’s greatest involvement probably started (between) 1889 and 1906,” she said.

Around the late 1890s, the two groups merged under the umbrella of the National American Woman Suffrage Association, or NAWSA.

Around the same time, M. Carey Thomas became the first female dean of Bryn Mawr College and its second president. She nurtured an environment where feminist speakers were welcome.

Goff said Thomas, along with her longtime companion and Bryn Mawr director, Mary Garrett, were obviously following what was going on in the suffrage movement.

“In today’s terms, we would have called both of them feminists — strong feminists,” said Goff. “And Garrett was friends with Susan B. Anthony, and brought Thomas further into the fold. They were both active, tangentially, in the national movement.”

Alice Paul, then a newly minted graduate of Swarthmore College, had attended one of the NAWSA meetings on campus and realized she was one of the youngest women there.

So, she changed that.

“When Alice Paul decided that she wanted to try to invigorate the movement with younger women, she brought this idea to some of the more mature women in the movement,” Goff explained. “M. Carey Thomas immediately came to mind, because here she was, president of this women's college, very much already involved.”

Paul was one of the more radical figures of the movement, leading protests with a more dramatic, tactical approach — a style that appealed to younger women of the time.

“When Swarthmore College is founded in 1864, it was one of the first co-educational institutions in the United States, and that definitely had an influence,” said Celia Caust-Ellenbogen, archivist at the college’s Friends Historical Library.

Swarthmore was founded by Quakers — notably by abolitionist and women’s rights activist Lucretia Mott — who viewed women as equal partners with men in religious and educational circles. This inclusion fostered more support for women’s suffrage on campus, particularly at the student-run newspaper, The Phoenix, founded in 1882.

In the late 1880s, Caust-Ellenbogen said there was a surge of conversation revolving around suffrage.

Paul organized demonstrations at Independence Square in 1911 and 1912, which had a tremendous influence on the Swarthmore student body. Caust-Ellenbogen said the paper published a special issue on suffrage, demonstrating how Swarthmore displayed widespread support for the cause.

Alumnae like Edna Gellhorn and Caroline McCormick Slade continued to push for voting rights for all citizens — a concept that, unfortunately, was not initially held by Thomas and Bryn Mawr’s founders.

Alumna Susan Walker FitzGerald was the first female elected to the Massachusetts House of Representatives. And, one of the college’s more known graduates, Katharine Houghton Hepburn — mother of the famous actress, who is also an alumna — fervently fought for birth control rights.

“Current students are very much activists,” Goff noted of the generations that followed. They are able to do more based on the work accomplished by suffragists, “much more so than the young women of 1890.”