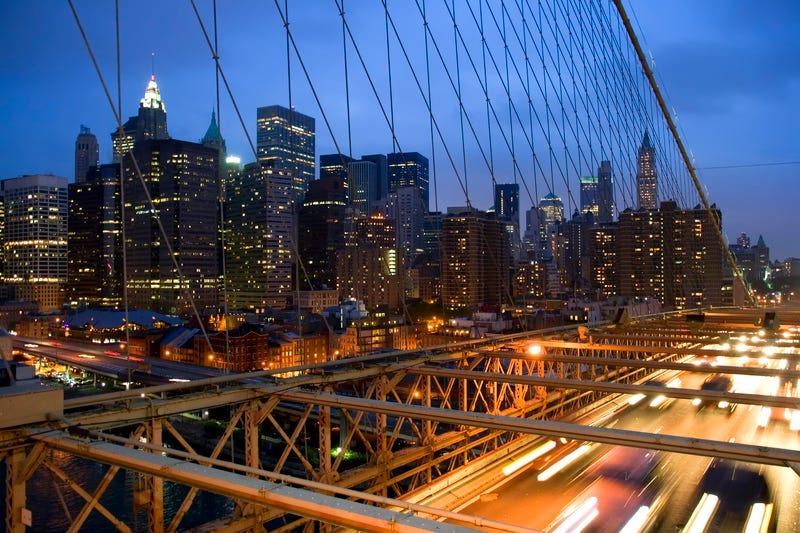 After 57 years on the air in Philadelphia and surrounding suburbs — 52 of them with KYW Newsradio — this is goodbye.

I'm off to new digs in the place where my life began and later became a favorite getaway destination. Going into full retirement, Mary and I are heading to Manhattan. But New York is the "crossroads of the world," so it's likely that we could cross paths.

When you visit Gotham, here are a few favorite places where we may meet for food, drinks and recreation.

When the sun is bright and the temperatures are warm, check out the Manhattan and Brooklyn riverfronts.

The Staten Island Ferry is New York's best bargain. It's free and takes commuters and visitors on an hour-and-a-half  round-trip ride with spectacular views of the New York skyline and Statue of Liberty.

Or, take a water taxi between Wall Street and Brooklyn for a carousel ride under the famous bridge and one of New York's best pizzas just steps away at Ignazio's or Grimaldi's.

The most iconic park in big city America cuts a green path more than 2 miles long through the middle of Manhattan. In Central Park you can stroll, jog and bike over its paths and roads.

Take a load off your feet on one of many scenically placed benches while listening to street jazz or feeding the pigeons and squirrels. That's the free stuff.

For a fee, there's a wonderful zoo, immortalized in the flick "Madagascar." Rent a rowboat on the lake, ride a peddle-powered rickshaw for two, or take a romantic carriage ride through the park.

In this vibrant city, restaurants form an evolutionary delight. As tastes change, some thrive, while others become extinct. But a few here have maintained a constant presence for more than a century.

Now, meander uptown to Grand Central Station and the Oyster Bar. From World War I through Vietnam, servicemen and women traveling between bases and ports would pass the time sipping beer and whiskey while slurping plates full of local oysters.

Between wars, commuters lined the mahogany. Today, it has become a seafood destination. But the attraction is still the succulent oyster, now raised from beds around the nation. Don't miss the chowders.

When I left my New York home in 1952, it was a baseball town with the Giants in Manhattan, the Dodgers in Brooklyn and the Yankees in the Bronx. Then there were the Giants on the football field, the Rangers on the rink, and the Knicks in the hoops.

Today, it still thrives as a sports town, though football has moved across the river to New Jersey. There's one less baseball team, but hockey and basketball have grown by one each. On any given day, you'll find a game.

From priceless art by the masters at The Metropolitan Museum of Art to artifacts of immigration history, the New York museum scene can take a lifetime and miles of foot power to cover.

Every day can become a time-travel adventure to the past and future. Music is everywhere, from opera at Lincoln Center to jazz at hundreds of large and small clubs and lounges, scattered around town.

The lights always shine on Broadway. It is truly a city that never sleeps.