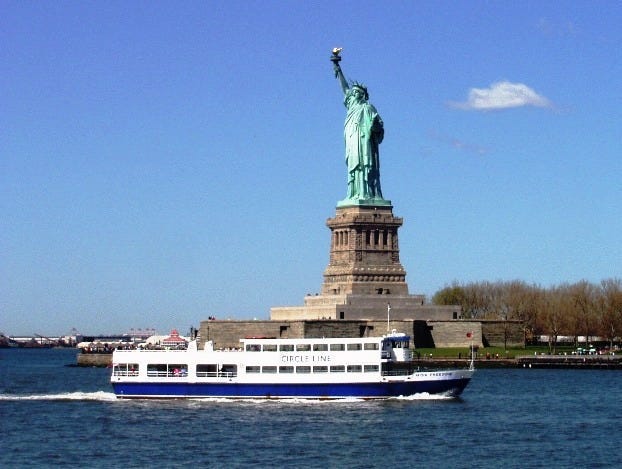 It was an observation on trying to re-live the past.

Returning to places where I lived, worked and loved, I found my most vivid memories had vanished. But as most of my friends have found when trying to recapture their youth, new memories are soon created from changes that rose from ashes of the past.

So, what's gone from the past and what can newer generations find to create their own unique travel adventures? Let's start where, for me, it all began.

Growing up in Manhattan, return visits have always been a search for the aromas, flavors and experiences of my youth.

There was the pizza at a bowling alley in Washington Heights, the Times Square Chinese restaurant with tile-inlayed tables, where my parents courted after World War I, and the dazzling cafeteria known as the Automat, where I held my high school job.

But in their place, I found that same pizza at Ignazio's on the Brooklyn side of the world-famous bridge. Imperial's chow mein has been revived at Wo Hop on Mott Street. At 2 in the morning, the line waiting for tables is out the door.

The Automat may be gone, but Chelsea Market, where you can stroll and nosh on international fare, has risen on the Hudson. Go — you'll like it.

In 1952 at the age of 17, I rode through the gates of the Cape May United States Coast Guard Training Center. In town, men walked the wooden boardwalk in suits, the women in fashionable dresses. They dined at the classic Victorian-style Marquis de Lafayette Hotel and went to see movies at two theaters.

Except for the movies, Abe Lincoln would have found it familiar. Change came slowly. Shopping has replaced the theaters, and condos rose where old hotels stood. Now beach gear, jeans and shorts encompass the concrete "boardwalk."

But there are newer seaside eateries and bars, like the Rusty Nail and Carney's. The past has not yet been erased. We can still enjoy fine food and lodging at the 19th-century Congress Hall Hotel.

The Coast Guard, in its wisdom, sent me to Bermuda as a flight radioman, flying search-and-rescue operations over the Atlantic while also learning how to casually wear a white dinner jacket and accumulate manners at iconic island clubs.

After discharge, my 62-year broadcasting career began in Bermuda. My working world unveiled the wonders of creating imaginative radio as a "theater of the mind."

After work, social life expanded to gatherings at the Little Venice, a red gravy, jug wine family-run spot with reasonable pricing and many memories. On my return, it had moved across the street.

The prices took a stratospheric turn, but the food and wine were spectacular. The population and density has grown, but the beaches, scenic beauty and some of the traditional inns and taverns seem timeless.

If you go, remember to make a stop at Tom Moore's Tavern and the Swizzle Inn.

Amsterdam is still among my favorite international cities. If you have a chance, do go.

My Dutch contract was up. Now there was a job waiting at a radio station in the Virgin Islands.

In culture, St. Thomas was a casual world away from Holland and colonial Bermuda. I learned to dance in flip flops, make appointments without a specified time, and have lunch on a pristine beach that has exploded into a major condo development.

The nearby island of Jost Van Dyke had a population of 40 goats. On a return visit, the goats were still there but joined by people, houses and one of the most popular Tiki bars in the Caribbean: Foxy's. The palm-fringed oasis was created by Foxy, a man who keeps the tradition of  Calypso alive.

You can now hop from island to island on high-speed ferries, sip rum at Pusser's Rum distillery, and sail from marinas on Tortola. Then, enjoy a unique Irish pub on the St. Thomas waterfront.

In another week, Mary and I will completely retire after one more broadcast. It'll be time to leave on the biggest getaway.