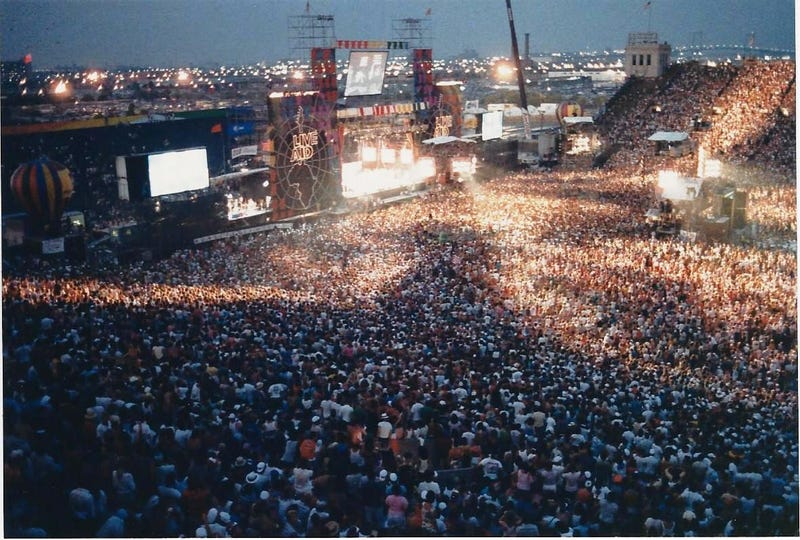 July 13, 2020 07/13/2020 11:00 am
PHILADELPHIA (KYW Newsradio) — On this day 35 years ago, Philadelphia captured the attention of the world as the host of one half of the worldwide benefit rock concert phenomenon Live Aid.

KYW Newsradio was there with music fans at the long-gone JFK Stadium in South Philly, to report on the globally televised concert, conceived by Irish musician and activist Bob Geldof, of the Boomtown Rats, and Scottish musician Midge Ure, of Ultravox, to raise money for Ethiopian famine relief.

The list of performers read like a who's who of rock music at the time, including Bryan Adams, The Beach Boys, Black Sabbath, the Cars, Eric Clapton, Bob Dylan, the Four Tops, Mick Jagger, Madonna, Billy Ocean, Tom Petty, the Pretenders, Santana, the Temptations and Tina Turner.

Led Zeppelin famously reunited at Live Aid, in their first performance since drummer John Bonham's death in 1980. Conversely, Duran Duran played their last live set that night with their original lineup until a 2003 reunion.

Philly legend Patti LaBelle performed, as did giant of Philly soul Teddy Pendergrass, alongside Ashford & Simpson, in his first appearance since the 1982 car crash that put him in a wheelchair. Former KYW Newsradio reporter Tony Hanson had covered the accident, and remembered the feeling at the venue during his set.

"People went wild when he was introduced and it was very emotional," he described. "People were crying as he thanked the crowd and then sang 'Reach Out and Touch' from his wheelchair."

The day-long show drew between 90,000 and 100,000 people, depending on estimates. Bill Roswell, who produced the live remotes for KYW Newsradio, was in awe of the event's scale.

"It was the first time I'd seen a crowd that big or been in a crowd that big," he said, also recalling the 95-degree heat. "Just watching police and firemen with firehoses trying to cool off the crowd."

"It was definitely a full house and very hot, but people were mostly in the spirit of the day and looking out for each other," said Hanson.

A second concert was held simultaneously at Wembley Stadium in London, which held about 72,000 people. The London show featured another massive roster of artists, including Elton John, David Bowie, U2, Paul McCartney, Sting, Elvis Costello, and Queen.

Phil Collins made news as the only artist to play both halves. He performed with Sting that morning in London, before flying to the U.S. via the supersonic Concorde jet to play a solo set at JFK, then sit in as drummer for Led Zeppelin and Eric Clapton.

The concert was also a chance to showcase Philadelphia as a premiere music hub.

"I think people who weren't around then should remember the fact or be aware of the fact that Philadelphia was a huge music town at the time," said former KYW Newsradio reporter Steve Holt, on site at Live Aid as a bureau chief for KYW's then-parent company Westinghouse. "There were plenty of other concerts at what was JFK Stadium before and after this event. Electric Factory was in business doing lots of concerts, there was a great folk music scene. Music radio was very strong."

Other Philly acts on the bill included the Hooters, and pop stars Daryl Hall & John Oates.

Singer Joan Baez opened the show with the declaration, "Children of the '80s, this is your Woodstock, and it's long overdue." But Holt said Live Aid far surpassed the 1969 festival.

"If you read about (Woodstock) and hear about it, it was pretty much a disaster from a whole bunch of standpoints, logistically. It rained, last minute stage construction, all kinds of stuff. And the sound was terrible.

"Here, 15-16 years later, all that stuff was really well handled. And it struck me that the generation that had been very young and naive and just plain lucky to pull off Woodstock had grown up and become very expert at all of the jobs involved in pulling off a giant concert like this," Holt observed.

Even decades later, with the enormity of the day dominant in memory, some performances do stick out.

"Mick Jagger and Tina Turner stick in my mind," said Holt. "They're great performers. I don't think anyone had seen them perform together, and it was a terrific jolt."

He also remembered the Led Zeppelin reunion fondly. "Seeing Led Zeppelin do Stairway to Heaven live, and the whole crowd singing along with it on the chorus, that was pretty cool."

"Each act was better than the one that came before it. And the ending with everyone singing 'We Are the World' was something I'll always remember," said Roswell.

"All the performers on stage was awesome, and also very moving," added Hanson.

"People have clear minds, clean hearts, and it is just a festive occasion that I don't think the United States has ever seen. A lot of people have made comparisons Live Aid and Woodstock. There is no comparison. Woodstock came out of a philosophy of bitterness. This is a unified feeling, primarily of young people, an outpouring of love like this country has never seen."

KYW Newsradio continuity director Angela Beatty, then 14 years old, said that mood extended to the subways, filled with concertgoers there and back. "It was completely safe," she recalled. "It was after 11 on a Saturday night, from Live Aid. The SEPTA trains were packed."

35 years later, Hanson still looks happily on the event. "It was a great event for Philly, coming on the heels of the MOVE confrontation disaster," he said. "It was a very positive day for the city."