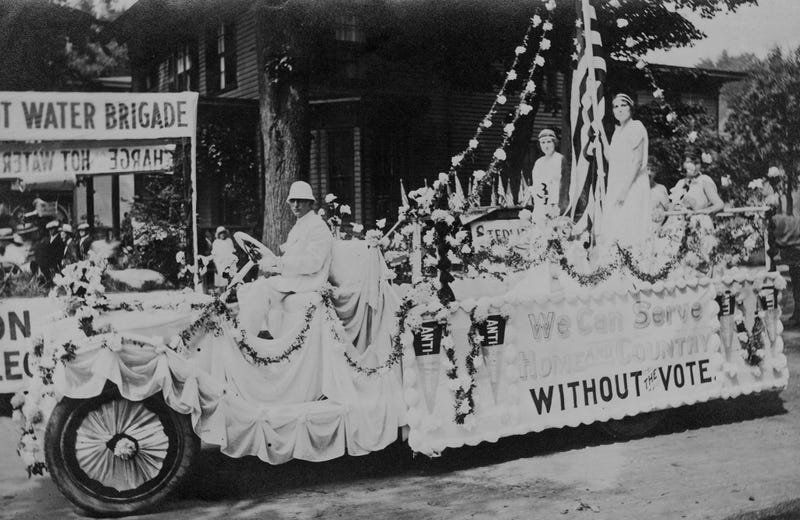 August 7, 2020 08/07/2020 9:00 am
PHILADELPHIA (KYW Newsradio) — Suffragists’ tenacious efforts to secure voting rights for women, fight for equality, and redefine gender roles are celebrated today, but at the time, calls for such reforms were considered radical, and the overarching issue polarized Americans.

At the turn of the last century, the concept of women being able to vote was gaining momentum, but it was also widely criticized.

Simultaneously, the social paradigm of late 19th-century women was changing. Gender roles evolved, and the idea of the “new woman” took off — inciting unease among more conservative groups.

Women started to dress more casually, participate in sports and ride bicycles. Some middle-class women attended trade schools for teaching. They had casual interactions with men — without a chaperone present — and held their own with the opposite sex.

Essentially, they were drifting away from the notion of familial gender roles and the value of being a woman in the household.

As women redefined roles for themselves, others internalized what those changes meant for them. Anti-suffragists were worried voting rights would make the country more unstable by unraveling the family dynamic and eroding the sanctity of marriage, which was seen as both a woman’s political and social responsibility.

“They were worried about making the country more unstable by destabilizing the family,” said Kathy Peiss, professor of history at the University of Pennsylvania. “The anti-suffragists were opposed to the idea of women having the right to vote largely because they saw it as a violation of women’s true gender nature — that they were mothers and wives — and that it might distract them from not only the duties of the home, but also their sense of women’s privileges to be in the home.”

Those spearheading the movement, however, argued the right to vote would actually improve society, because women would be more involved and attentive to these societal issues.

In fact, she said more women were opposed to suffrage than men. Feminists of the time still believed in the separate gender roles — but they also believed gender differences did not liken to inequality.

“(Goldman) believed women were more libel to legislate morality,” Krulikowski explained. “She also saw women's suffrage leaders as a group of privileged Americans simply seeking more privilege for themselves and ignoring the exploited.”

Some of the “exploited” were African-American women.

“Many suffragists who were white did not support Black women or Black people, in general, having the right to vote,” Peiss said.

White suffragists used that racist ploy as a campaign strategy. By excluding Black women, they thought that would persuade more people to support suffrage and voting rights.

“There were a lot of anti-suffragists who were women,” continued Dawn Teele, associate professor of political science at the University of Pennsylvania, “and I think a lot of them were against women's voting rights because they worried about the types of things other women were going to support in the electorate.

“Women who were against suffrage, some of them were worried that it was going to threaten women's economic well-being to have women participating in politics and be expected to earn income and things like that.”

Other women preferred voting rights to be decided by states, rather than the federal government — leaving it up to the states to regulate suffrage and potentially exclude on the basis of race or class.

Business and tavern owners were also afraid the suffrage movement would impact their livelihoods, as some women’s groups fought to establish Prohibition.

“There was a very large organization called the Women's Christian Temperance Union,” Peiss explained, “and this was founded with the idea of getting men to stop drinking and ultimately pass legislation to prevent the manufacture and sale of alcohol. But this was also an organization that was in favor of women's rights, and in fact, there were important members of this organization who were pro-suffrage.”

However, those against Prohibition worried that women were going to “enforce a moral order” if they could vote, and those in favor of alcohol would be out-voted — which created more tension in the anti-suffrage debate.

Ultimately, we know the movement succeeded in passing the 19th Amendment, though gender equality has been cyclical throughout history.

The fight for equality is especially important now, as the suffrage movement can provide insight into movements of today, like Black Lives Matter.

Voter suppression has been consistently problematic throughout U.S. history, too — almost like it’s “the American way,” Peiss alluded — and it still lingers today, in an election year.

“Knowing something about the history of what it took to gain the right to vote for African-Americans, for women — those are just really important issues, especially for young people,” Peiss said. “Nobody advances unless everyone advances.”

This series, presented by the National Constitution Center, explores the 19th Amendment in the context of 100 years since its passing. Follow along throughout the month of August as KYW Newsradio shares little-known stories of Philadelphia’s push for equality, and the fight women are still battling today.
Produced for radio by Hadas Kuznits. Written by Rachel Kurland.