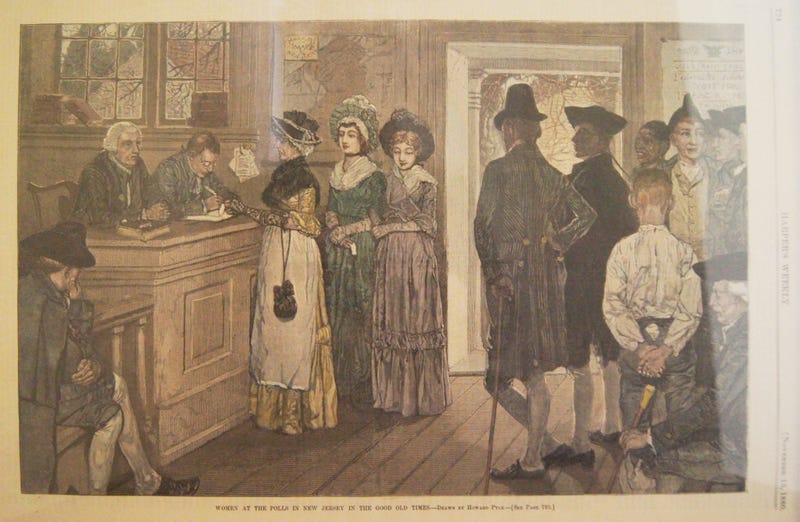 August 5, 2020 08/05/2020 9:00 am
PHILADELPHIA (KYW Newsradio) — In its history, New Jersey is known for many forward-looking innovations and ideas that progressed society as a whole.

The Holland Tunnel was the first underwater passage built just for cars. Thomas Edison is recognized for creating hundreds of acclaimed inventions in his Menlo Park lab. Even the first boardwalk in the world was constructed in Atlantic City.

But many may not realize that New Jersey was the first to enact another turning point in history: The Garden State permitted women and free people of color to vote in state elections for more than three decades — well before the peak of the suffrage movement.

From 1776 to 1807, people of color and single women — including Black women — were allowed to cast their ballots, as long as they had 50 English currency pounds worth of property, whether that be land, businesses, animals or other items.

Women sometimes inherited such ownership via the law of dower thirds, in which “any woman who brings a dowery into a marriage, once her husband dies, she is entitled to one-third of that dowery to come back into her personal ownership,” according to Dr. Marcela Micucci, a women’s historian with the Museum of the American Revolution in Old City.

There is still debate among historians about whether the law to allow women to vote was intentional, as Quakers had a large stronghold in the state, or as a loophole.

“In 1790, seven of the 13 counties in New Jersey passed an additional election statute … that actually enters the words ‘he’ or ‘she’ into the New Jersey state Constitution,” Micucci said. “This goes statewide in 1797. It was very intentional that they were giving the right to vote for women.”

But soon thereafter, women’s voting liberty was met with resistance.

“When the elections don’t go the way they want them to, we see some pushback on who should be allowed to vote and why,” Micucci explained.

The controversy culminated in 1806 amid a dispute over where to build a courthouse in Essex County, in northern New Jersey. Some residents reported allegations of voter fraud and suppression, claiming men were dressing as women and going back to the polls, slaves were voting, or women were illegally casting ballots.

The following year, voting rights for women and people of color came to an end in New Jersey.

“In 1807, we do see them eventually passing a statute to restrict the franchise to white, male citizens,” Micucci added.

Instead, women in the Garden State began to involve themselves in public issues, like education, even opening schools all across the state.

“And those schools will actually be the schools that train this kind of next generation of suffragists that emerge,” Micucci said.

One of those women was Elizabeth Cady Stanton, a social activist and abolitionist, who attempted to vote in Tenafly, New Jersey, in 1880.

At the Museum of the American Revolution, Micucci and other historians have been sifting through state archives, searching for poll lists. Only nine lists, thus far, identify New Jersey women who voted during this 31-year window.

Of those lists, historians have been able to name 163 New Jersey women who voted, and they are now researching the genealogy of these women to find out who they were and where they came from.

“Some newspapers reported up to 10,000 women voters in the state of New Jersey at this time,” she said, “but without having poll lists and because they are so very difficult to find, it’s hard for us to put an actual estimate on the number of women who actually did vote.”

“I don’t think many people have actually acknowledged how active women were politically in the 18th and early 19th century, so it’s really telling a new story — an origin story of the women’s rights movement.”